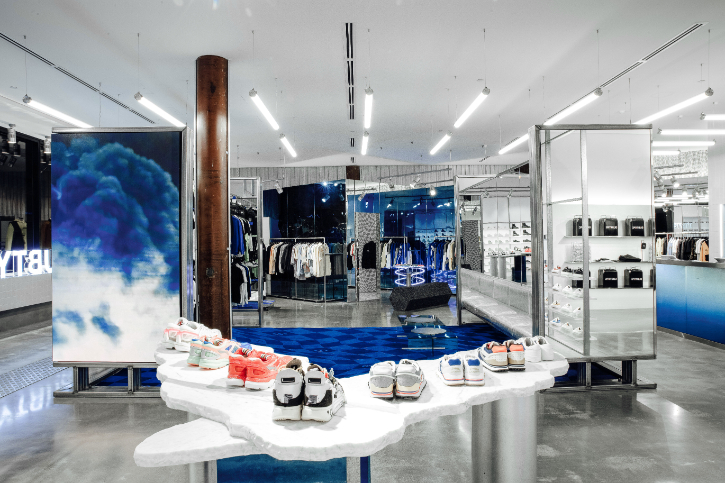 In late February, New York-based, but Melbourne-born Blair Cooper of Noise Noise Noise was named the best emerging practice of the year at the IDEA 2021 gala.

But 2021 was not the first year in which Noise Noise Noise was shortlisted for Emerging Designer of the Year. In fact, it’s a third nomination – a feat for a studio that has only been around since 2017.

Specialising in retail and brand experience, Cooper continues to push conceptual design and experiential space within the Australian retail industry. And although she was unable to attend the gala due to being located in New York, the love in the room for Cooper was palpable.

To celebrate Cooper’s win, ADR caught up with the young designer to hear all about her blazing career thus far.

ADR: How did it feel to win Emerging Designer of the Year? What does it mean to you?

Blair Cooper: Honestly, overwhelming. To win an award of this calibre is humbling, especially considering the incredible talent of this year’s IDEA Awards.

To be recognised for the retail work I have brought to life for Australian brands means a lot and gives the encouragement to keep thinking a little differently.

ADR: You have been nominated for IDEA Emerging Designer of the Year for the last two years – why do you think 2021 was finally your year?

Cooper: I think 2021 was a difficult year for all studios, work dried up for some, budgets changed for others, or projects were put on pause with no end in sight.

The Noise Noise Noise projects that were recognised by the IDEA judges were all done remotely – in fact, I haven’t visited two of the stores in person – it all came to life via FaceTimes and fluid communication.

I think this year was retail design’s year to shine especially considering shopping centres were closed for a majority of the year for the nonessentials. It was important to showcase some of the retail design that is accessible to customers now doors are back open and get people excited again to experience physical space.

ADR: Can you share how you choose your studio name ‘Noise Noise Noise’? What inspired this pick?

Cooper: Well, my mum called me Blair after a week in hospital of my crying “ble ble ble” so she figured that’s what I wanted to be named and at school, I never got to participate in roll call as the teacher already knew I was present.

I’ve always been “loud” so I figured embrace the noise, make it loud, be bold, take risks, be memorable, bring the personality. Some will like it, some won’t- but just like design it’s subjective!

ADR: You are known for your confident use of colour and experimental design in retail spaces. What do you always try to keep in mind when working on retail projects?

Cooper: Function. Retail only works with the systems and processes in mind to actually run a store.

It’s not just about products to sell. It’s about how those products get to the store, how they are stored, how does the back of house work, where do garments get steamed, how easy is it for the store team to put a sale through at the counter, how far is the reach for the receipt role?

The “glossy” factor comes in after the function, I actually start laying out spaces with the back of house first, and work my way forward.

ADR: What challenges have you faced as an emerging designer?

Cooper: Starting a studio was a pretty big challenge. I had to learn a lot, fast. It wasn’t like the movies sitting in cafes all day sketching with oat lattes on repeat – it was accounting and contracts and business-y things that most designers aren’t versed in or have knowledge about.

Thank you to all the mentors and friends who gave advice along the way, and didn’t judge when I made mistakes.

ADR: What was one of the biggest lessons learned since starting your practice?

Cooper: Relationship building is important- not only with clients but with every single person along the journey. Be genuine, ask questions, bring people along who know more than you do.

ADR: What other designers, peers and creatives do you admire?

Cooper: To everyone who pursued through the last two years and didn’t throw in the towel- kudos to all of you!

ADR: What advice do you have for emerging designers who want to follow in your path?

Cooper: Keep going. Be yourself. Challenge the brief, but know when to pull back before you become annoying to a client that “just wants something like this Pinterest photo” and get an accountant to do all of your business-related expenses. Because if you are like me your brain is better used to being creative than working out business activity statements.