Home • Mezzanine • Not like all the others: Fifty Fifty house 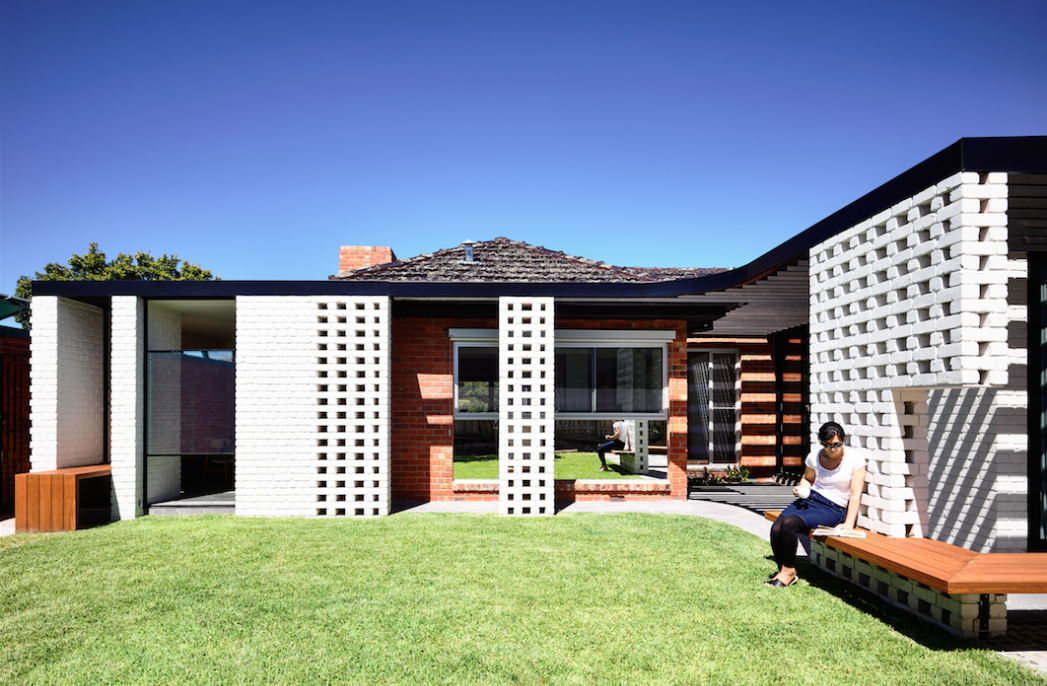 For the curious and perceptive people among us, there is a house in the inner suburbs of Melbourne that is not quite what it seems. At first glance, the brick façade appears just like all the other 1950s creations it’s surrounded by, but look again and that unassuming façade turns into an intricately detailed, cantilevered brick window with a trail of white bricks ‘zipping’ together old and new. “All the houses in the street look the same. Then there’s this slight oddity as you drive past, but you could also almost miss it even though it’s clearly a very contemporary intervention,” says Nick James, one half of Architecture Architecture.

The renovation project was recently completed by the up-and-coming practice and came to the studio two and half years ago when it was still in its early days. “There is great benefit in clients going with emerging practices because I think often you’ll get above and beyond the typical service of a more established practice. There’s no doubt we pour a phenomenal amount of hours into these projects just to extract everything we can out of them,” says James. The evidence speaks for itself in the outcome of this home that has been transformed to meet the needs of a modern family.

Although the home has been completely reconfigured, from the street front it’s only the dramatic diagonal join between window and brick that gives a hint to the contemporary update inside. James explains the joining of old and new, “All the brickwork at the front used recycled bricks from what was demolished at the back, so we were able to match them up somewhat.”

He goes onto explain how the concept for the front façade evolved. “We had an idea for how it would look at the front, which started with the fenestration and corbel details of the existing house. Taking cues from the original house is something that we do regularly in our work, so that got us thinking pretty early on how we might take some of the elements and translate it into the more contemporary build.”

But even though the idea was planted early, it wasn’t until the team got on-site with the builder, engineer and bricklayer that it started to take shape. “That façade took a long time to resolve. The engineers didn’t know how to do it, they needed the bricklayer to talk it through and we didn’t have the bricklayer until we had the builder. It was an interesting exercise in how to make something work with all the right people on board,” says James. 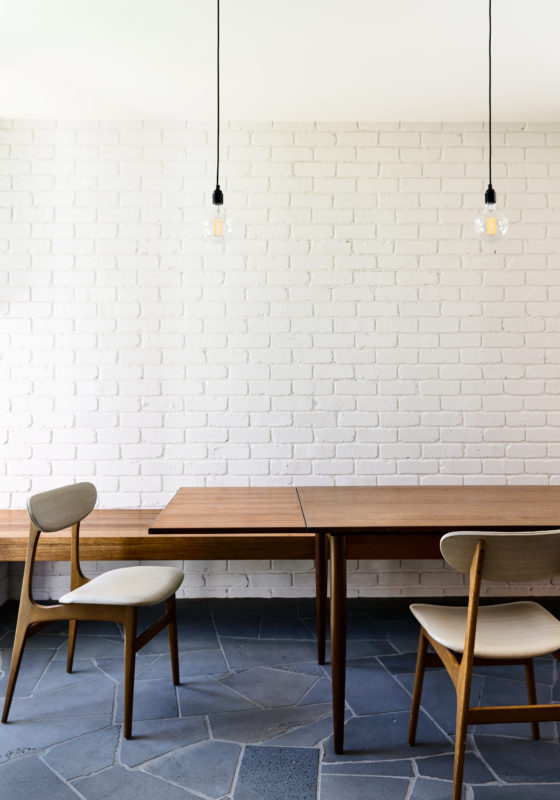 Moving inside, the entryway is punctuated by a multi-use dropped, circular area, giving an indication to another driving concept that emerged in the design. James explains that the home does away with a sprawling, open plan living space and instead embraces one of the original features.

“When we first went to the house it had this pleasant circuitous route,” he says. “It was quite nice. The living area wasn’t fully open plan in terms of being one big box, rather the spaces flowed quite casually into each other. We thought it would be great to explore how this could be enhanced through the renovation.”

The circulating paths throughout the home have been strengthened through the design, as James explains, “The different openings, joinery elements and all the living areas have a strong connection to each other. You’re led around the house for various functions or moments of retreat. A small house can feel larger by having spaces to move through and retreat to.” This approach also allows a variety of experiences and engagement with the outdoors.

Connecting inside and out

One of the biggest requests from the clients was the connection to the outdoors and that is where the original home was sorely lacking. Despite being on a decent sized block, and already having a good sized backyard, it wasn’t being properly utilised.

“We kept the size of the backyard, rather than creeping the house size up and just made better use of what was there. There are a variety of ways you can come out of the back of the house. There are two sliding doors, two swing doors, two windows that lift up and can be climbed under and also a servery window from the kitchen to pass food out. The master bedroom also connects directly out,” says James.

Part of reiterating that indoor/outdoor connection can be seen in other nuances as well. As James points out, “The blade walls at the rear of the house have a combination of hit-and-miss brick patterns and cut-outs, and they were used to open up to the deck behind creating tilted views outside.”

As a final note, James reveals, “We spoke to the clients a few months after they moved in and they said they keep finding little things and places to go within the house, or different kinds of light or different views outside. Just little moments, places to perch and new angles. For us, it’s amazing feedback because that’s exactly what we tried to do.” 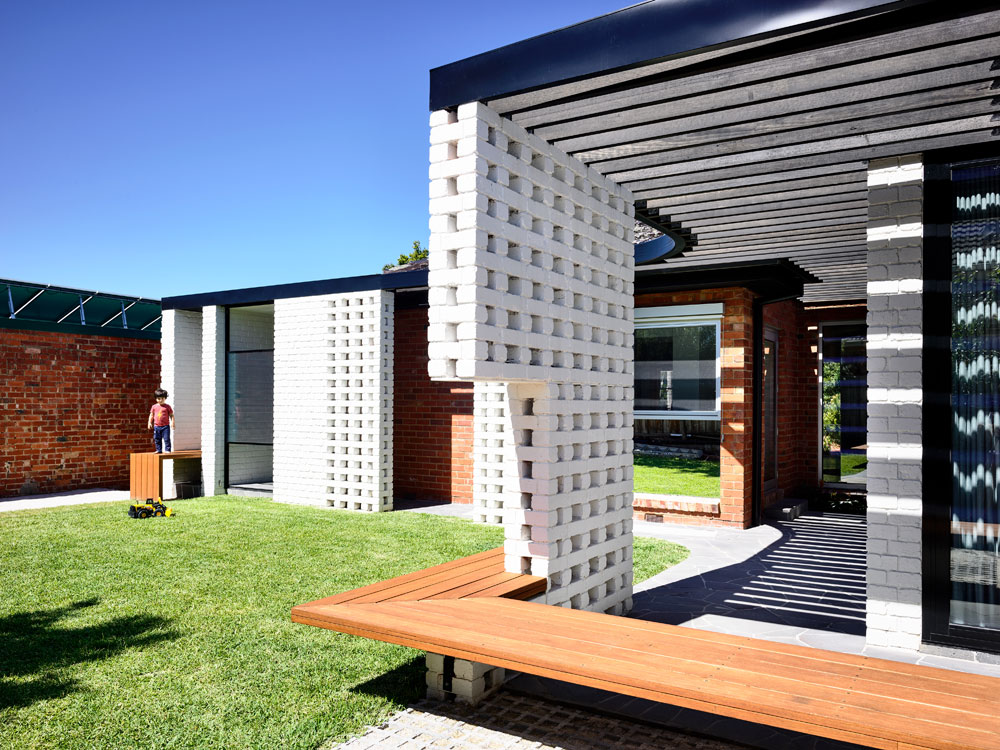 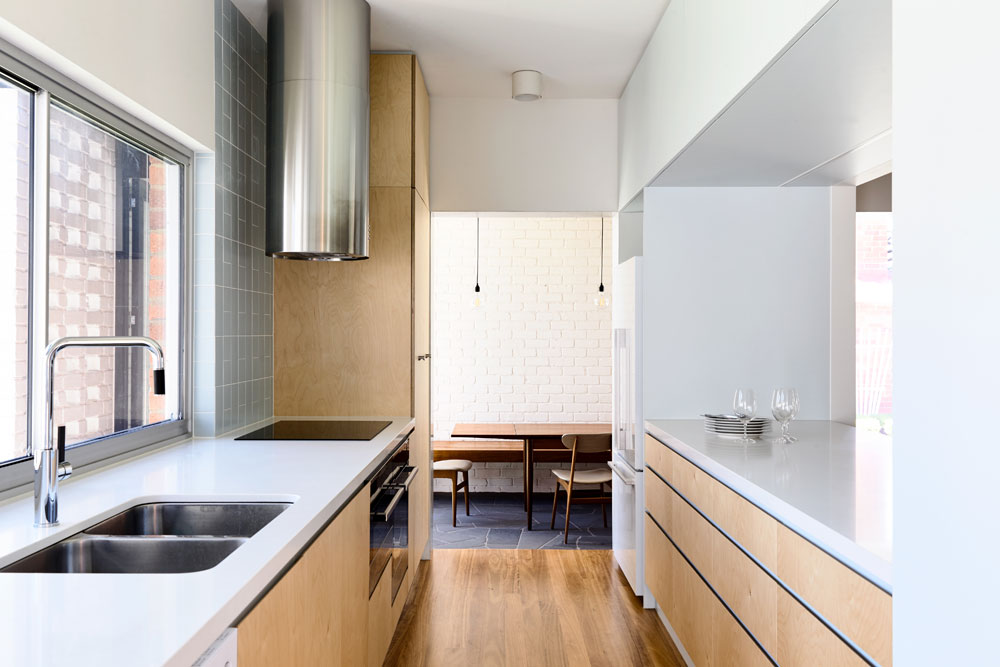 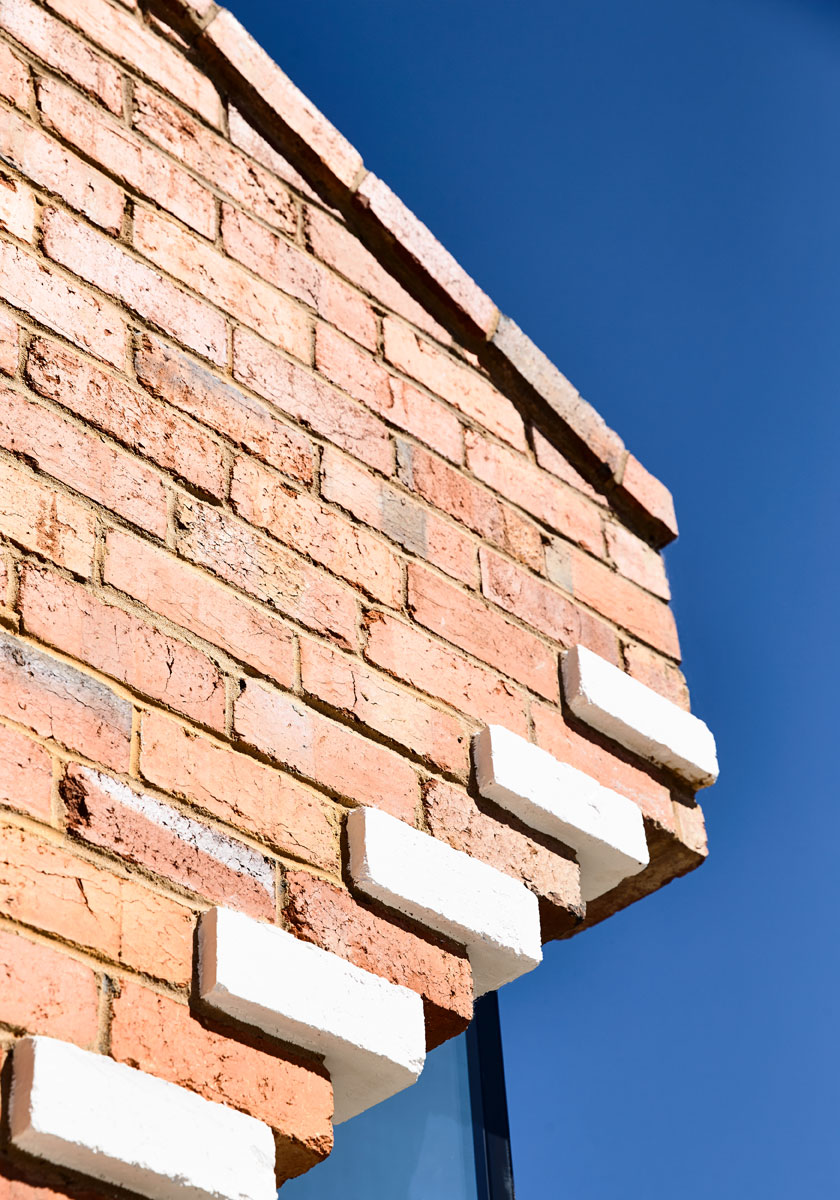