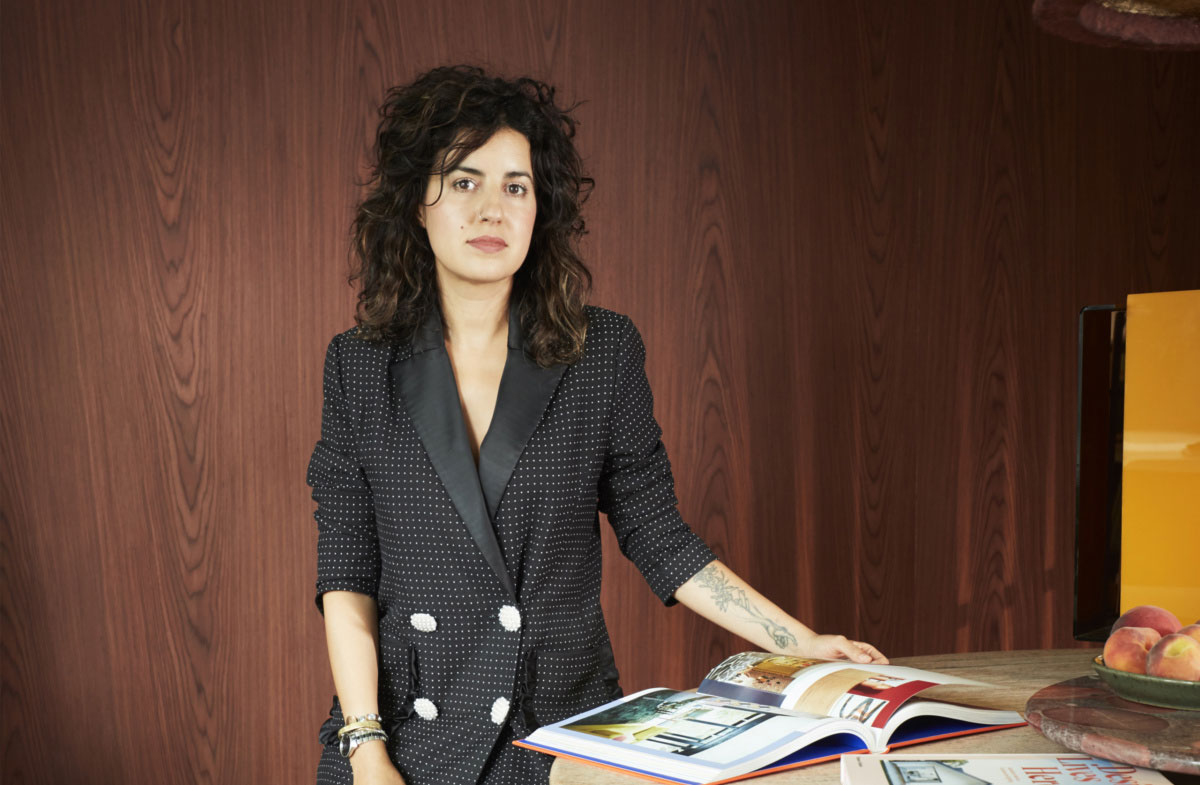 With more than 15 years under her belt, Yasmine Saleh Ghoniem is known for her boundary pushing and bespoke style. Previously at the helm of Amber Road with landscape architect and sister Katy Svalbe, Ghoniem struck out on her own in February, launching YSG in a refurbished hair salon on Liverpool Street in Darlinghurst.

A former IDEA judge and Editors’ Medal winner for 2017, Ghoniem is exuberant, daring and dedicated. Her signatures are adventurous and unexpected textural pairings and individual furniture pieces, which are often custom designed by Ghoniem herself.

The new YSG office is a study in all of those things – bold concepts and resourceful detailing, the mixture of high and low octane colours, the discordant textures and patterns. It’s perfectly on brand. And the perfect place to chat to Ghoniem about her design journey and the challenges of starting a solo studio.

When did you first decide you wanted to become an interior designer?

I grew up in a desert.  I spent most of my life in the Middle East, and it could reach around 50 degrees sometimes – sizzling hot – so interiors really became my world because I spent so much time indoors.  It wasn’t ever a lightning bolt ‘I wanna be an interior designer when I grow up’ feeling though. I was actually pursuing a career in entertainment. I had been dancing since I was four and had been in various bands over the years, but my very traditional Arabic father thought I needed stability and was super set on me going to university. So off I went begrudgingly and studied interior design (now I’m glad he made me).

And when did you decide it was time to start your solo business?

I had returned to Sydney after living abroad for over two decades because my brother begged me to come home and start a band. I got a job at a boutique interiors studio in Rozelle and was quickly let go when I was found writing lyrics at my desk. I was 28 when I started freelancing solo and Amber Road was born when my sister moved back to Sydney from Spain. So the business journey has had many an evolution, ending with my latest solo offering as YSG. It’s funny how life unfolds.

What’s the fundamental core of your new practice, your philosophy and your process?

Now more than ever as I’ve just launched my solo practice, I’ve really had to think about what my niche is in the design arena. At its very core, my outlook is nourished by the layers of my culture. My mother is Australian and my father is Egyptian so my formative years were spent mostly in the Middle East before escaping to America to attend university.  My nomadic childhood provided me with a super speedy adaptability mechanism. That said, my vision is informed by staging and storytelling – no doubt due to my love of performance.

YSG spaces are sculptural. Everything’s inter-connected with the focus being on custom. Daring palettes, organic shapes and unexpected palette plays are my hallmarks. It’s imperative the end results imbue atmospheric potency – sometimes a whisper like my Edition Coffee Roasters cafe in Haymarket or a louder presence like Polychrome House with its graphic palette. If I don’t supersede a client’s expectations then I haven’t done my job to the best of my capabilities.

How is your studio structured?

On a physical level, it’s open. We all sit opposite one another and share a meeting/meals/think-tank table – custom, of course, with a lazy Susan at its centrifuge to spin concepts around – samples, swatches, small artisan pieces or artwork that ignite illustrious ideas. There are no closed office doors.

In terms of the team, Jaime Bligh, my newly appointed associate and senior interior designer has been with me for several years. She’s my rock. We have incredibly similar design sensibilities. It’s not uncommon to find ourselves awkwardly wearing similar outfits.

My other three team players offer an amazing gamut of skills from graphic design to styling. We all have complementary strengths. In terms of work, we all play our part when it comes to design. There aren’t any egos. No one really gets handed a project. It’s collectively procured, which is probably a manager’s worst nightmare, but the office seems to thrive in chaos.

FREEDOM! To be given a brief and then left to my own devices, now that’s dreamy. Cool project outcomes eventuate because of someone’s trust in your ability. Complete freedom would really unleash some of the studio’s talents.

Favourite project types would have to be hotels. They are a great mix of hospitality and residential. Hotel Collectionist was a super fun project with its focus on individualistic and design-led rooms. We traipsed the globe metaphorically and created some quirky fictional characters for inspiration.

I’d love to re-design Tilda Swinton’s home and a long dream goal has been to design mobile homeless shelters. Everyone deserves a home.  I hope YSG can realise this one day.

How do you organise and manage the competing demands of a solo practice and life?

As I’ve just launched my solo practice, I’m trying for that ying/yang balance! The last 12 months have been intense – a total rebrand and new website to build, plus scaling up on the hospitality front with two new projects that are scheduled to launch in the coming months in addition to residential projects. It’s been a case of tick-tock with very little down time. I did manage to tour Singapore and Portugal in October 2019 with fellow winners of the Dulux DIAlogue on Tour scholarship and meet local design talent and shared ideas.

I’d relish the chance to flit overseas twice a year to both design fairs and different cities and towns around the globe, taking in the bustle and more isolated rural/coastal environments equally. For now though, my radar is subliminally on alert 24/7.

What do you feel is the most challenging part of being a designer today?

Trends are the biggest killer of inspiration and originality.  Time, or lack there of, is also a creative buzz kill. Things take time to cement, age and procure. The best outcomes are born from patience.

Your sources of inspiration?

I find a lot of inspiration from old movies. For example there was a scene from the 1976 remake of a Star is Born, where the main character is dancing in front of this epic fireplace. That heavily inspired some forms in my recently completed Walsh Bay penthouse.

I know this sounds trite, but nature does a lot for me in terms of colour and texture, and I always imagine the music I want playing in this space (something I think about right from the start).

What was one of your biggest lessons learned since launching YSG?

In a sense, I masterminded the interior design side of Amber Road from the get-go in 2013 as Katy focused on the architectural landscaping division. But that said, I am now the solo figurehead of a company. The biggest lesson I’ve learnt is not to compromise to the detriment of a project because a client just wasn’t capable of seeing the bigger artistic picture. I’ve had beautiful cards from clients thanking me for pushing them out of their comfort zone. Fortunately, I’ve aligned myself with adventurous clients over the past few years who solicit my services for the unpredictable and whimsical results that inevitably eventuate.

What advice would you give to emerging designers who want to follow your path?

In terms of going solo, recognise your strengths and especially your weaknesses. As you have to wear a range of hats from creative to number cruncher, find suitable staff or freelancers you can engage with on a need-to basis to provide back-up and ideally advice, so that you can run with what you do best.

I’m fortunate enough to employ four staff members (some part-time) that extend my creative outreach with phenomenal ideas and practical smarts. That said, carve time out in your weekly schedule to oversee what you’ve outsourced, especially in the fields of the business you don’t feel competent (or super interested) in, whether it be BAS statements or chasing suppliers for materials. It’s imperative that you’re on top of every aspect of your business.

What are you working on and what’s your next goal?

I’m currently nearing completion on two big hospitality projects in some of my favourite ’hoods: Redfern and Surry Hills. The former is Atomic Beer Project, a 600-square-metre brewery. The latter is Four Pillars Gin’s flagship distillery/bar on Crown Street, which is really exciting. We’re also working with a beautiful couple with whom we’ve done work for years on a 400-square-metre penthouse in Darlinghurst, and can’t wait to share some new resi projects in the next couple of months.

Goal-wise, I’m quietly forging my passion for custom furniture, creating a unique range of eclectic pieces given that so much of what I design for clients is specific to the project – from bedside and dining tables to outdoor furniture. When the timing’s right, expect to see a unique YSG range (available through an e-store on my website and via select distributers).

IDEA 2022 shortlist set to be revealed on 18 August