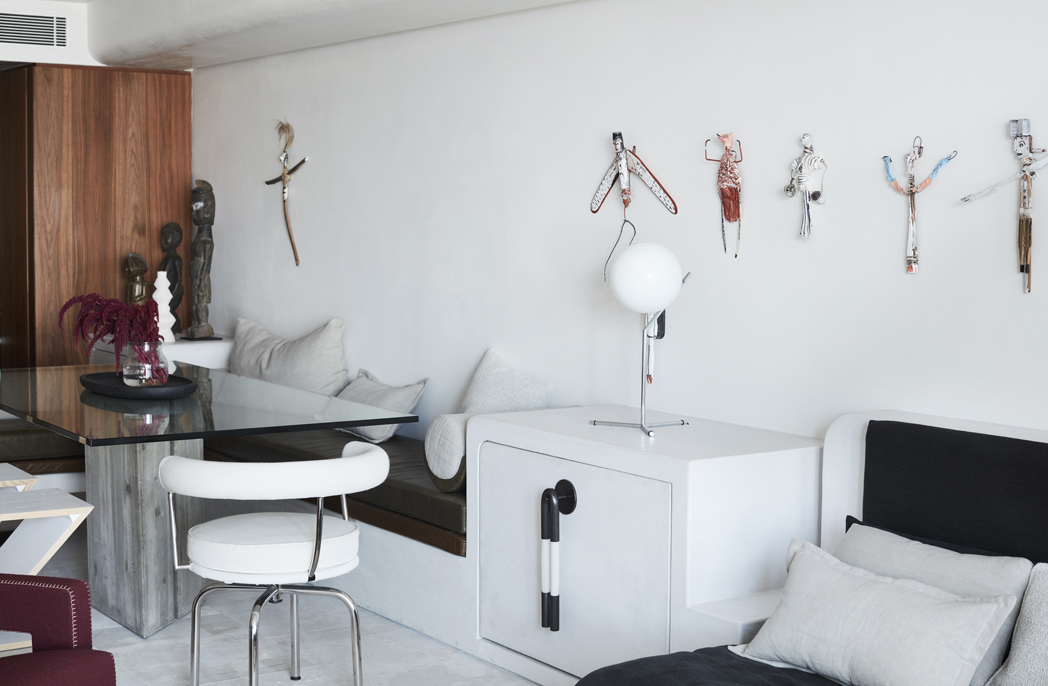 Reimagining the prime-positioned apartment in a cool palette of black and white, Amber Road used an art collection as its starting point for its design. More than a curated selection of works, the art objects are a personal history of the client’s early life in Papua New Guinea and the beginnings of a new collection. Additionally, despite the beachfront location and ocean view, the client did not want a coastal ambiance. Tricky.

A refit of one of the Pacific Apartments on Bondi Beach’s foreshore, the building once affectionately known as the ‘Wedding Cake’, has been transformed in all but the ceiling heights, which remain low from its Swiss Grande Hotel days.

Amber Road’s glossy and sumptuous marmorino-plastered walls and ceilings by artisan plasterer Fernando De Oliveira (New Era Building Solutions) work beautifully to play light throughout the apartment and harmonise with the great whack of sunlight and ocean view occupying the eastern extreme. Luxe and edging towards a slight luminescence, the minute variations in the marmorino create a subtle shifting light that negates any sense of cramping that the low ceilings impose. 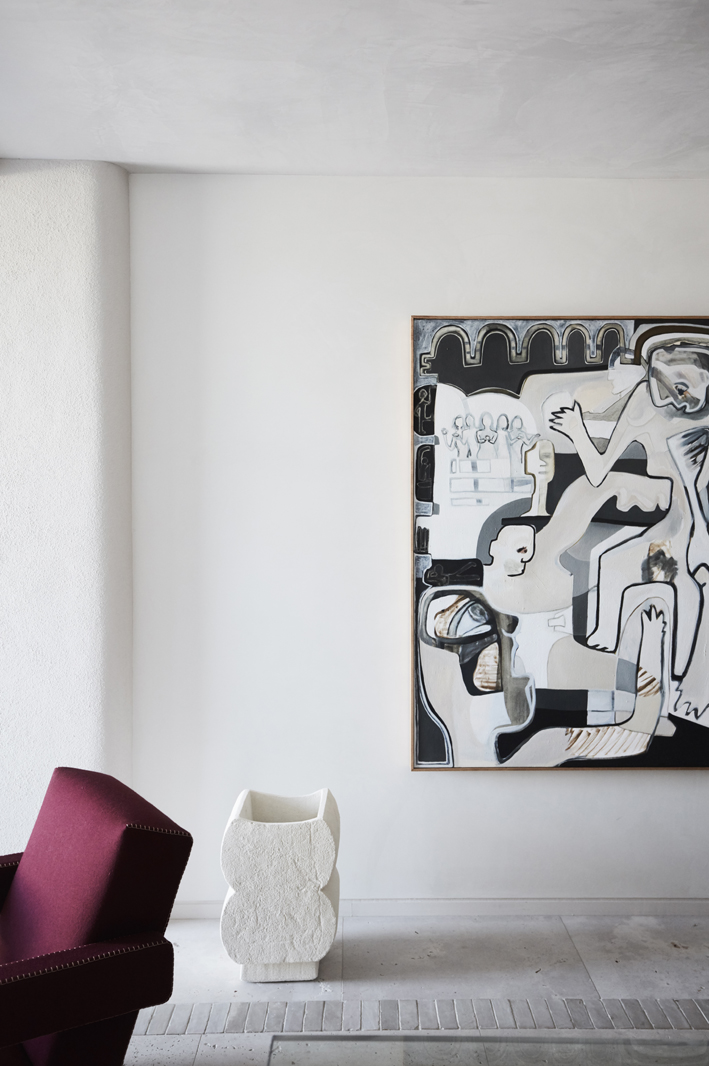 Material quality has been toyed with superbly throughout the apartment with textural finishes shifted from expected surfaces. For example, the wall surrounding the completely recessed television takes a traditional outdoor render, refines the texture somewhat and then joins the neighbouring wall with a slight curve. (This additionally reinforces the blur between indoor and outdoor living that this apartment embodies.)

For the floor, rather than push for visual width with horizontals, the long lines of the apartment are amplified. “We wanted to exaggerate the inside-outside feeling with detail such as the feature strip of tiles pointing to the water,” says Katy Svalbe of the reflective, handmade ceramic tiles (Casa, Onsite) inset into the raw-sawn Aren Bianco limestone (Onsite) that has replaced timber. 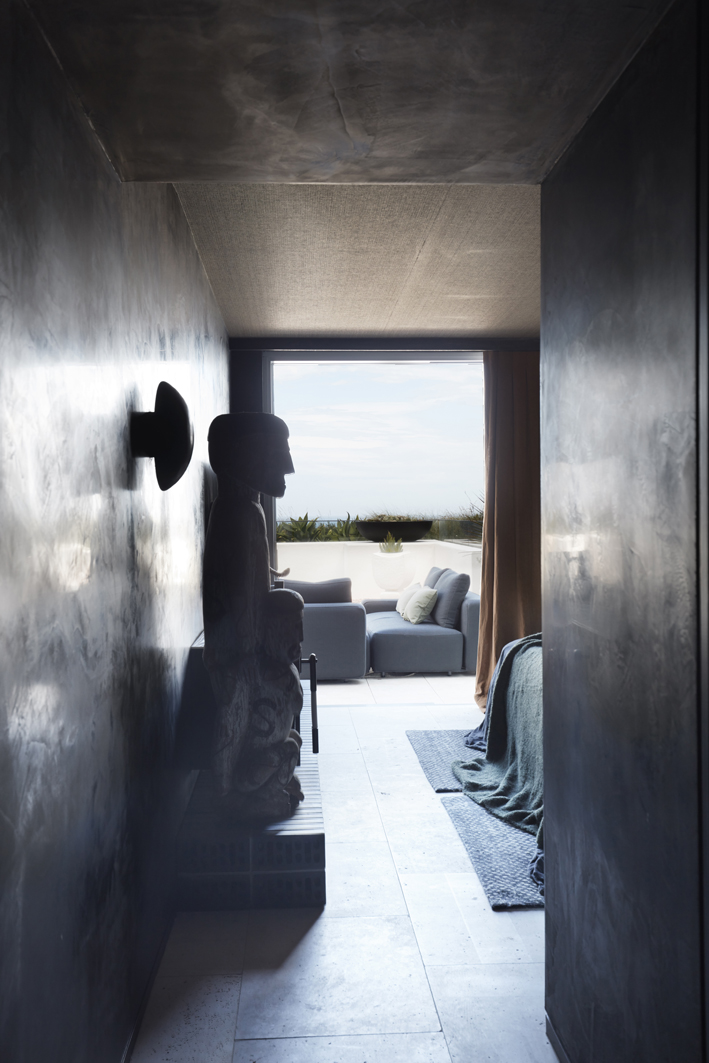 In the bedroom, where the walls are black marmorino, the ceiling is woven, textured wallpaper (Kyoto, Instyle). The black is an exceptional and risky choice that has worked magnificently. Rather than create a cavernous void, the polished surface brings both the light and the movement of the ocean into the room. There is also a certain coolness to the response, similar to the often dark timber interior corridor of a Queenslander.

Bedding in navy blue and olive adds a level of complexity that enriches and softens the palette. The (brilliant) vintage brass wall light sourced from France (Pamono) and bespoke cabinetry (Forest Furniture) in combined timbers and stain of dark brown and black provide similar layers of complexity.

The ceiling wallpaper is an unexpected masterstroke that integrates the art objects without an overt thematic response. “Informed design details such as the woven texture of the wallpaper tie in with the character of the Papua New Guinea spears without being overly ethnic,” says Yasmine Ghoniem. 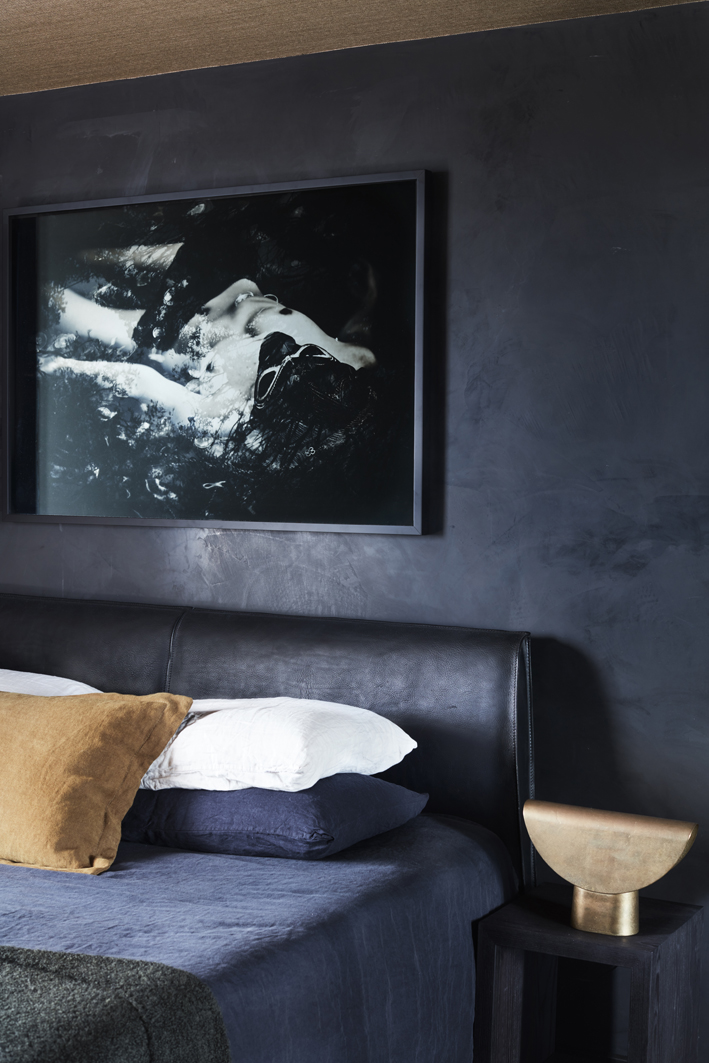 This subtle contextualising of the artworks sits comfortably with more than the unusual use of materials. In the living room, for example, the long wall has been deliberately hang with small sculptural figures by Michelle Connolly as a sketchy arrangement. Granted, they are ordered and arranged as a line, but their individual position as objects pushes beyond containment. It additionally works superbly with the dining and lounge arrangements.

Effectively a series of spaces that flow towards the sea, the dining area is focused by a vintage piece of design gravitas. Sourced from Vamp Vintage, Svalbe and Ghoniem came across the Saporiti table in the very early stage of design discussions: “We saw it and fell in love. It was the first piece of furniture we bought and we created our concepts around the piece,” says Ghoniem. Svalbe adds, “We had a very short lead time. Other things could wait but a dining table was an early essential so the client could eat.”

Comprising a solid concrete block and a 20-millimetre crystal glass top, the bravura table is paired with a built-in banquette, a pair of Cassina Zig Zag Chairs (CULT) and Charlotte Perriand’s LCT chair for Cassina (Cult) that can move from dining to living as needs be. 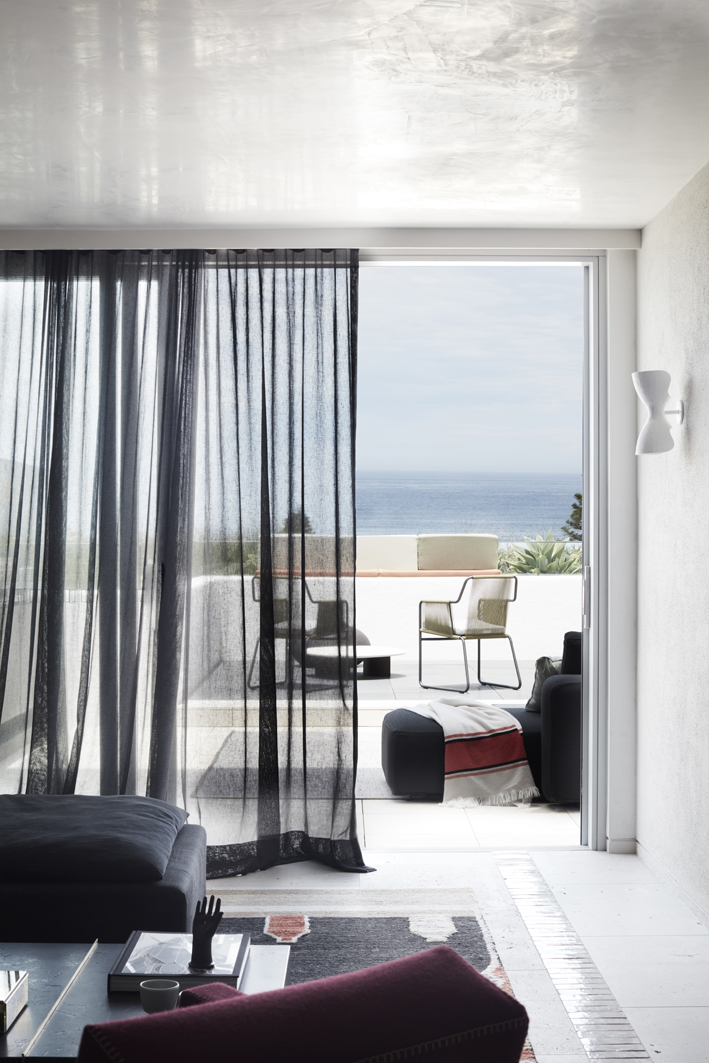 The lounge area is relaxed and easy with the E15 Shiraz lowline modular sofa (Living Edge) providing a solution that can be easily shifted to suit and does not interfere with the view or flow. A Cassina Ultrecht Armchair in Charlotte (Cult) provides the major introduction of colour, while its succinct sculptural form reinforces this interior as a departure from coastal. “The luminous quality of the plaster brings in the light, while the furniture brings in colour, form and quirkiness,” says Svalbe.

This quality is continued in the bespoke brass handles that Amber Road created with Bartolo Brass Studio and used on the custom joinery (Promena Projects, and Forest Furniture). 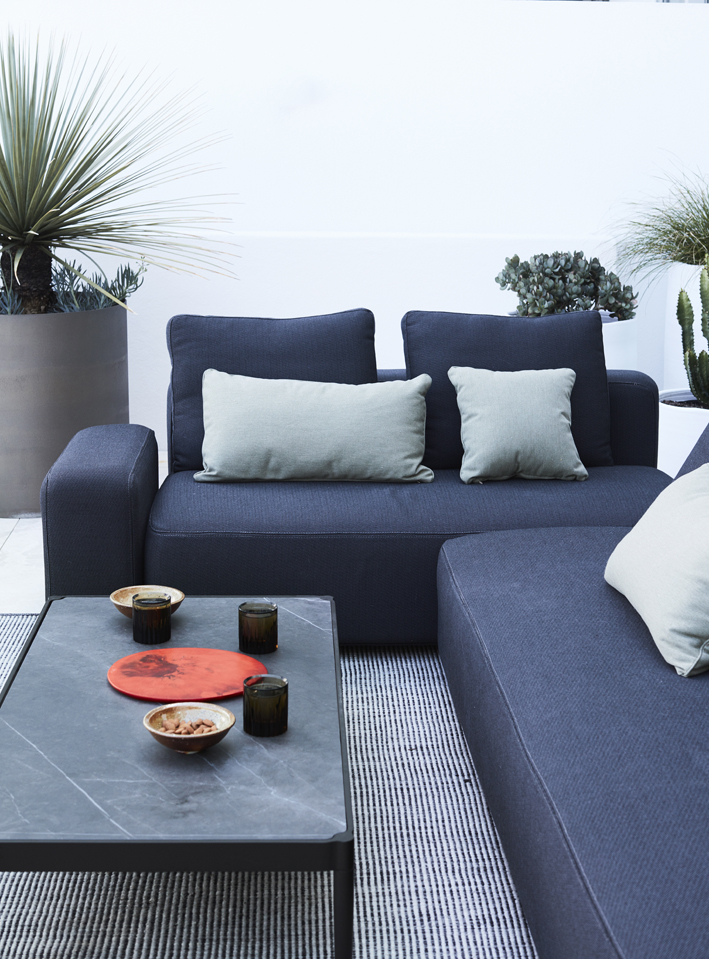 Comprising an inverted U form, the handles are tactile, sculptural and of a sublime mid-century French aesthetic. The custom joinery is, in fact, a delight. The bulkhead, containing a large plumbing stack and seeking to remove all trace of standard finish from the apartment, was disappointingly not removable.

Instead, the design for the corner detail was changed to a curve with a series of floating shelves for objet and has the overall impression of a sculpture from the Memphis art movement. The curve itself becomes a recurring motif throughout, but again not overtly. 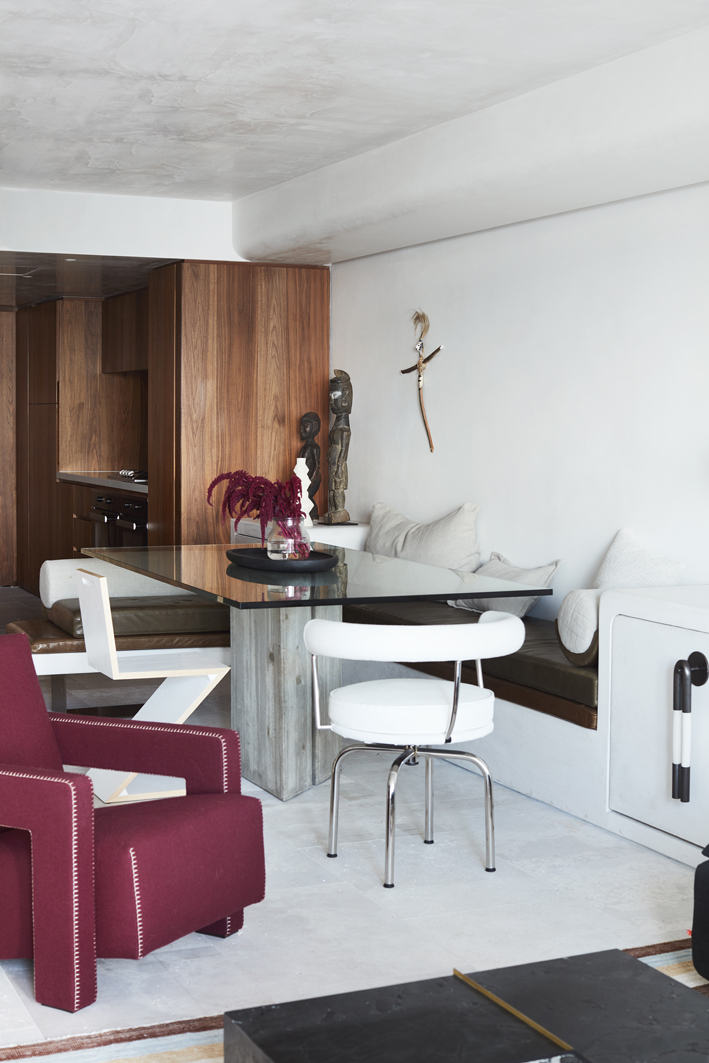 Moving further east the apartment transitions to the exterior seamlessly, with a viewline established via a short glass wall framed by a rendered plinth that conceals overzealous existing patch fittings. A neat seat pad perches on the ledge and a backrest slips over the glass wall for additional seating. 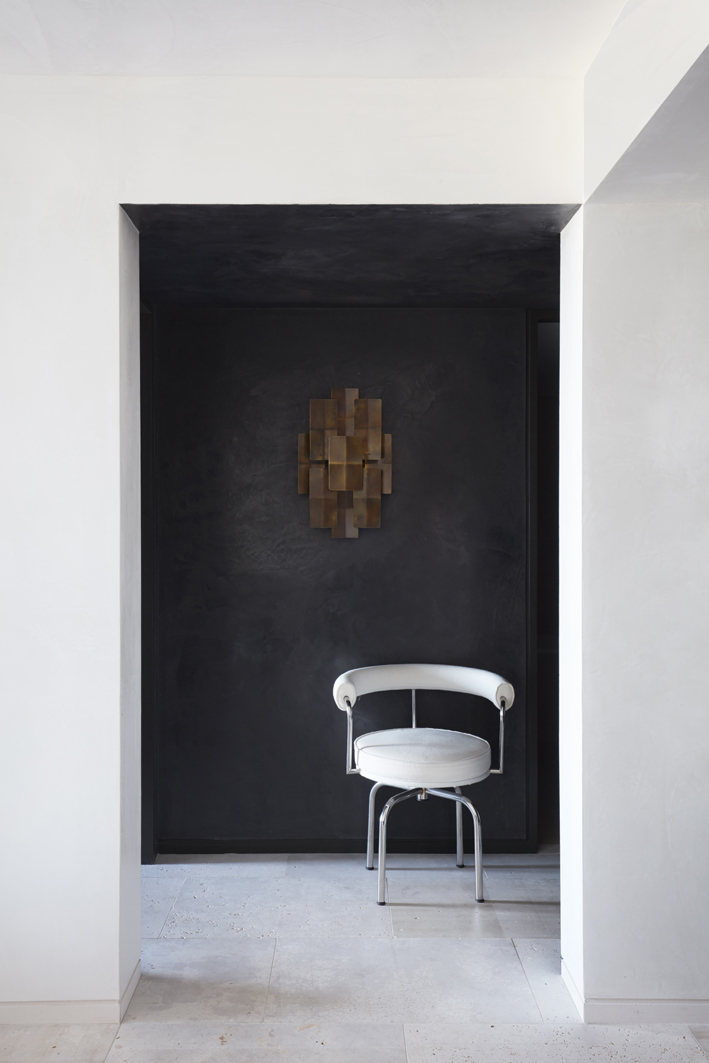 There is a sense of fearlessness to the apartment that works a treat. Bright, luxurious, casual and decidedly not of a coastal aesthetic, it nonetheless feels right at home on Bondi Beach.

This article originally appeared in inside 100 – available online and digitally through Zinio.

At home with: Yasmine Ghoniem