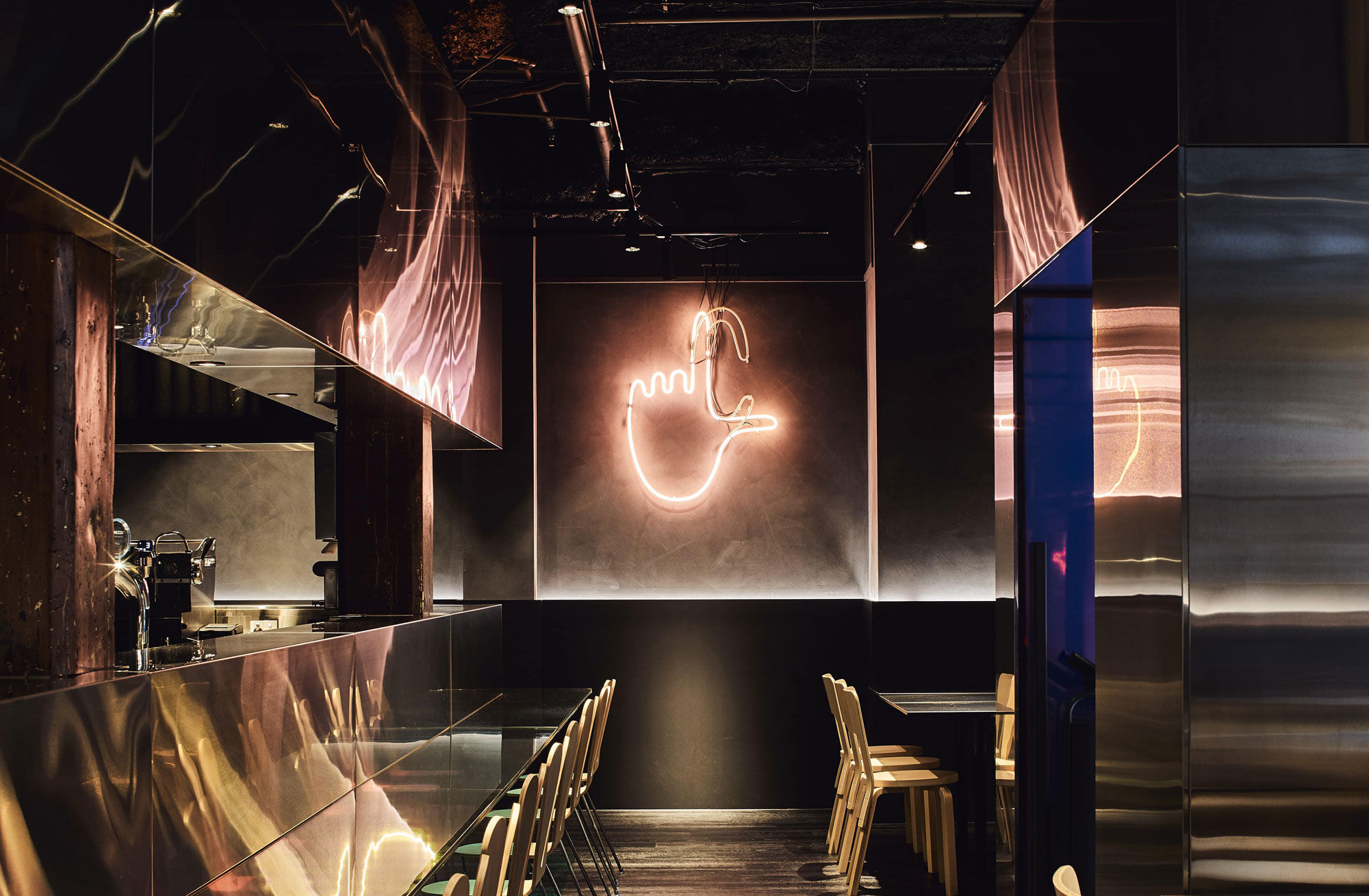 Stainless steel, glass and a dichroic ledge that sends sparks of colour throughout the space transform Cafe Lafayette into the otherworldly antithesis of the typical Melbourne cafe.

Cafe Lafayette is the sister of Grand Lafayette, a bright and airy restaurant in Prahran with plenty of natural wood and industrial overtones.

When its owners Solar Liang and Monique Wu were presented with the opportunity to put down a second site in one of Melbourne’s iconic laneways, Niagara Lane, they kept the brief pretty simple – make it different.

“I didn’t want white. I wanted something new. Something that would fit into the next Instagram wave,” says Liang.

Hassell interpreted that as a futuristic space that is as unexpected and alien as Cafe Lafayette’s Japanese-inspired menu. The spot is known for its a raindrop cake – a translucent agar jelly cake paired with your choice of brown sugar syrup, matcha, rose or peppermint sauce.

The Melbourne practice inserted a “black vessel” into the space, painting the walls and datum floor black to provide a backdrop for the stainless steel Japanese sushi-style bar that dominates the cafe.

The bar has a cantilevering dichroic ledge that “echoes shades of pink, purple, green and blue”, spilling sparks of colour across the surface.

“It’s rare that you work on a project like this that is striving to be different, not just saying it,” says lead designer Di Ritter.

“We’ve created the rainbow of colours through the dichroic glass, pairing it with deliberate lighting to accent each table.”

The size of the space limited the design scope for Hassell, as did the heritage restrictions of the buildings.

The building is 150 years old and elements like the brickwork, bluestone and timber columns couldn’t be touched. Neither could the exterior, meaning Cafe Lafayette couldn’t place any external signage advertising where it was to anyone walking down the laneaway.

Hassell countered that by teaming up with Melbourne design studio Studio Round to produce a “series of illustrations of gesturing hands and tunnels that act like portals to another place” to beckon people in from the street.

This “cheeky, playful tone-of-voice” is continued in the cafe’s menus, uniforms and social media.

“Another problem with this building is the lack of natural light,’ says Liang.

“That’s why we went with the darker, almost spacey, futuristic look. But at the same time, it’s small, elegant, dedicated.”

Hassell completed the design for the cafe in 16 weeks, accenting the heritage brickwork and timber columns with a combination of black and stainless steel countertops and the same light timber seating throughout.

The hero of the space really is the dichroic ledge, which was applied as a thin adhesive sticker to all the stainless steel surfaces.

“The element of surprise and wonder as to how some of the cafe’s dishes come together echoes in the way the dichroic film and stainless steel play with colour and light,” adds Hassell associate Prue Pascoe.

One of Studio Round’s neon signs finish the interior with a stylised hand forming the C and L of Cafe Lafayette.

Hassell recently completed another project that married heritage with contemporary, cantilevering an all-white structure over a once-hidden church in the new Geelong Arts Centre.