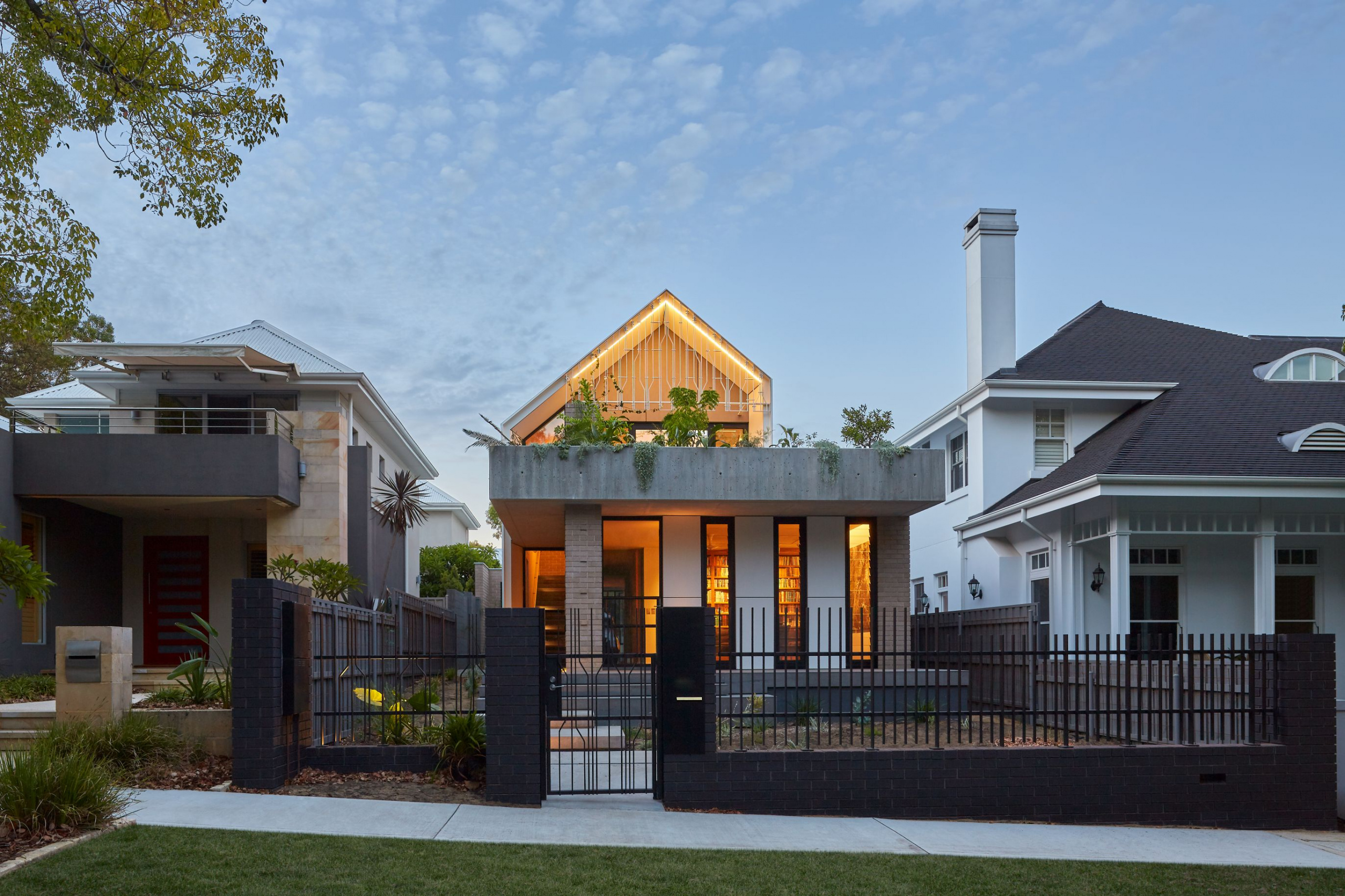 Responding to the brief for an eco-house with no air-conditioning, Justin Carrier and Steve Postmus designed a passive cooling system that uses vents in the roof and troughs filled with water beside the house to keep it naturally temperate in Perth’s hot climate.

“From the outset, the brief the client had set for us was ambitious from an environmental sustainability viewpoint,” Carrier tells ADR.

“But it was a real pleasure to work with clients whose ethical values aligned with our own.”

Carrier and Postmus Architects had many “long and intensive meetings” with these clients to meet the ambitious sustainability brief, while also figuring out a way to “bring elements of the surrounding and disappearing wetlands in Perth” into the home.

Inwardly, the house gathers around three cow troughs, which Carrier calls “cooling ponds”, while its upper floors open to mature tree canopies and the park beyond.

The pools were designed not only to help the home achieve its 6.8 star rating, but also to “invite local fauna” back into the site.

“Red Zephyr Blue. The Red and Blue relating to the red and blue dragonflies which dart around the gardens and water bodies now, and Zephyr for the breezes that cool the home.”

Stone was used as a base for the whole house externally and internally, with brickwork wrapping and mirroring the pattern in the roof vents to the insulated wall panels, leaving space in the middle of the build for the internal courtyard.

An earthy palette grounds the home and blends it into its environment with a mix of brickwork, dark stone floors, timber finishes and concrete.

Sculpted ceilings mirror the morning and afternoon sunlight and become awash into night with a warm glow from concealed uplighters.

Inside, the layout intentionally resists an open-plan design with each room given an individual purpose. Materials were specifically chosen to further enhance this sense of considered functionality.

“The client also had a great collections of books, music, bespoke furniture and artwork, so this provided great opportunity to customise the interiors to suit,” says Carrier.

For example, a private music room was designed aesthetically and acoustically to encase existing collections of music and an extensive collection of solid bookshelves.

Located above, the artist studio “distinctly belongs to the outside world”, with its terrace opening out to the streetscape and a panelled shutter a reminder of its connection to the inside.

Timber was used to unify the different spaces. Sleek, minimal timber bookcases in the living rooms and bedrooms were brought by clients from their first build and were integrated into the new design.

“This was their third house I had worked on with the client. The first being in 2001 when I was a young graduate and the second in 2006 when I worked in another practice,” says Carrier.

“It was a little strange in some ways, as there was furniture I had designed for their house back in 2001, which we were now designing to accommodate in the new house.”

The kitchen occupies the centre of the house and is surrounded by an open layering of dining, shaded terraces, gardens and summer gazebo spaces.

Outside, low-maintenance featured and patterned brickwork, stone and more timber harmonise with the natural environment.

Connecting with the naturalist endemic landscape and native flora and fauna, the architects considered the growing garden as part of the build, but designed to be low maintenance, so the retired couple would not have to worry about the upkeep.

Trees will eventually provide a canopy in the courtyard to allow for natural shade over the drop pool. While bluebell creepers and coral vines will climb the decorative trellis to become its street address, with more native plants welcoming endemic frog species.

Carrier Postmus is an integrated architecture and landscape design studio based in Perth. Landscape and environment is key to all its projects.