Home • Architecture • In a spin: the history of revolving doors 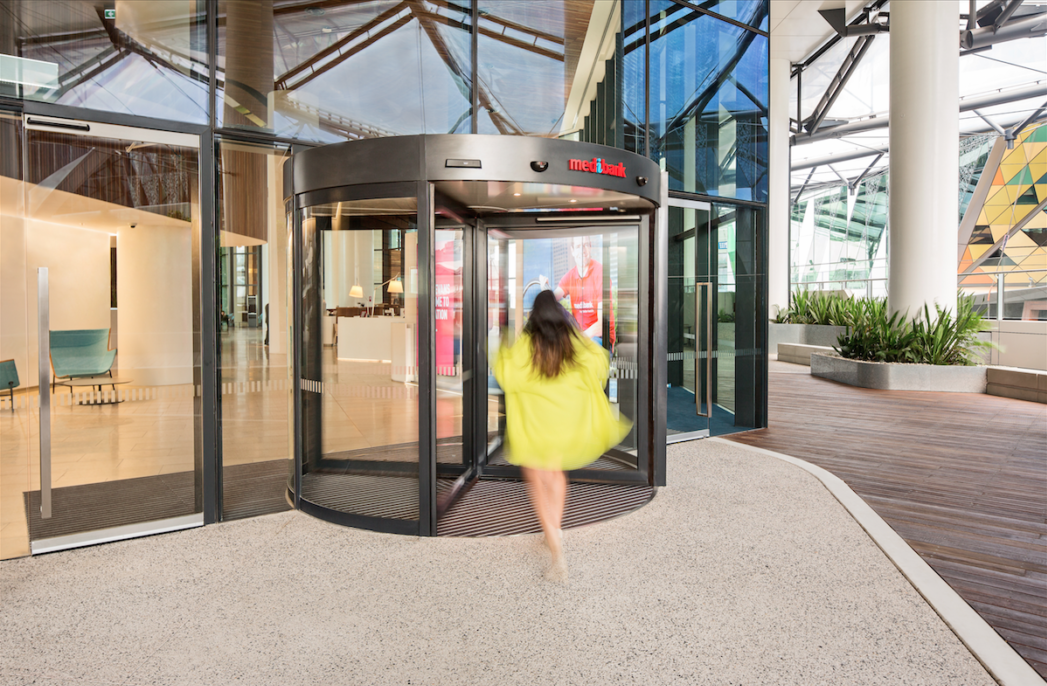 In a spin: the history of revolving doors

While the splendidly named H Bockhacker may have been granted the first German patent in 1881 for a Tür ohne Luftzug (door without draft of air), the equally magnificently monikered Theophilus van Kannel is generally regarded as the father of the revolving door, thanks to his patent of 1888.

But apparently Kannel’s design was actually all to do with a certain level of misanthropy or, more so, misogyny.

The story goes that he invented the revolving door because he simply hated holding doors open for people, especially women. It has also been reported that Kannel was a man without a family. These two facts may not be unrelated.

Nevertheless, Kannel’s loss (of social interaction at least) was the world’s gain and the first example of his invention was installed in Rector’s restaurant in Times Square, New York in 1899. Other positive elements of the system soon became apparent. So too did the pitfalls…

In his patent, Kannel pointed to the system’s “numerous advantages over a hinged-door structure… it is perfectly noiseless… prevents the entrance of wind, snow, rain or dust… moreover, the door cannot be blown open by the wind… there is no possibility of collision, and yet persons can pass both in and out at the same time”.

The biggest drawback in the early days of revolving doors, of course, was the safety issue. A 1942 fire at the Cocoanut Grove nightclub in Boston in the US killed hundreds of people, many of whom were overcome by smoke inhalation as they crowded towards the exit, overwhelming the revolving doors and becoming stuck.

This is why it is now law in many parts of the world to flank revolving doors with outward swinging hinged doors for use in an emergency.

In Australia, however, the history of the revolving door is not so well recorded. It is believed that the first use was at the (then) State Bank in Collins Street in Melbourne in the mid 1980s. Whether the 80-odd years between the take-up of the invention has anything to do with Australians simply being better mannered and friendlier than their transatlantic counterparts is mere conjecture.

While they may be happier to converse with strangers in portals, however, it does appear that Australians are lazier than the Americans, as since that first installation it has become
far more common to see automated revolving doors in Australia than manual ones.

Dormakaba installs somewhere between 30 and 40 revolving doors a year and we’ve only sold one manual in the last five years, whereas we have colleagues in the US who only do manual revolvers. It’s a significant part of the business there. From a cost point of view, there isn’t much difference as all you’re doing is putting a motor up in the carousel. Fundamentally, though, the benefits of revolving doors are clear and current technology has really only amplified the advantages Kannel indicated in that very first patent.

The only practical method of ensuring the main entrance to your building provides an effective airlock is to install a revolving door.

This is achieved by its rotating carousel design, which provides a consistently closed entry system, effectively a buffer area shielding the comfort of the internal space from the harshness of the external environment.

This airlock ensures the external weather conditions do not impact unfavourably on the internal building space, the way sudden cold or hot wind gusts can with a sliding or swing door entry. Other related benefits include a significant reduction in noise from passing traffic, as well as keeping out dust and debris that could normally be blown through an open door.

Revolving doors are the best possible automation to control the environment of a building. Kannel referred to their ability to keep out the elements, but as buildings have grown and their occupant numbers have soared, it’s primarily the external air temperature factor that has become the greatest issue.

Revolving doors are used in commercial environments when a high volume of foot traffic enters and exits a building. Air drafts work against insulation technologies and can waste almost all of the energy used by heating and cooling systems, but revolving doors minimise the amount of air that moves in and out of a building. This consistently closed, yet always open, buffer provided by
the revolving door provides significant energy efficiency benefits.

The centre carousel rotates within its own pocket of air, ensuring the conditioned air of the building foyer does not escape and impact on the energy use of the building’s heating, ventilating and air-conditioning (HVAC) system.

It also ensures that hot or cold air does not flow into the building foyer and this is very important in campus-style office buildings with large void areas from the entrance foyer. To design a five-star Green Star building, the use of revolving doors for the main entrance is considered essential.

Architectural benefits can be just as important as the practical benefits of a revolving door. A revolving door offers a building entrance a striking focal point that cannot be achieved with a linear sliding door system and it can be designed to complement the surrounding façade, tying in multiple design elements such as shape, balance, colour and movement.

To establish a unique building entrance, a revolving door is the best possible solution. It can be custom designed in a range of sizes, finishes and features to meet the requirements of the building infrastructure as well as the architectural intent of its designers.

David McCall is the business development manager – Entrance Solutions Pacific at Dormakaba. He has a current portfolio of revolving doors, physical access systems (PAS) and all Dormakaba Automated Solution Products. Dormakaba is a content partner for AR.

Read an interview with the cover star of AR150, Mette Lange of Mette Lange Architects, here.

The Bice Building part of the old Royal Adelaide Hospital and built in the 1930s had a revolving door!!!