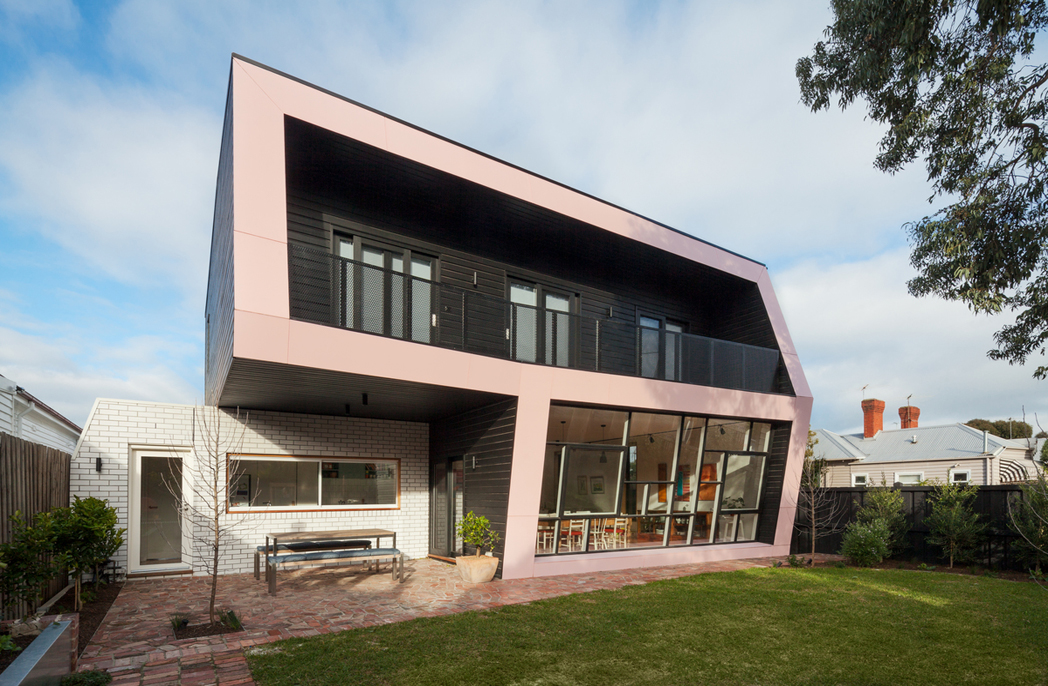 Leveraging the opportunities of multiple frontages

Located on a prominent corner in the Melbourne suburb of Balaclava, this project involved the re-configuration and extension of an Edwardian weatherboard house for an evolving young family.

The unusual house is experienced ‘in the round’ and the design leverages the opportunities of its multiple frontages to animate and engage with the streetscape, through the use of colour and shape. 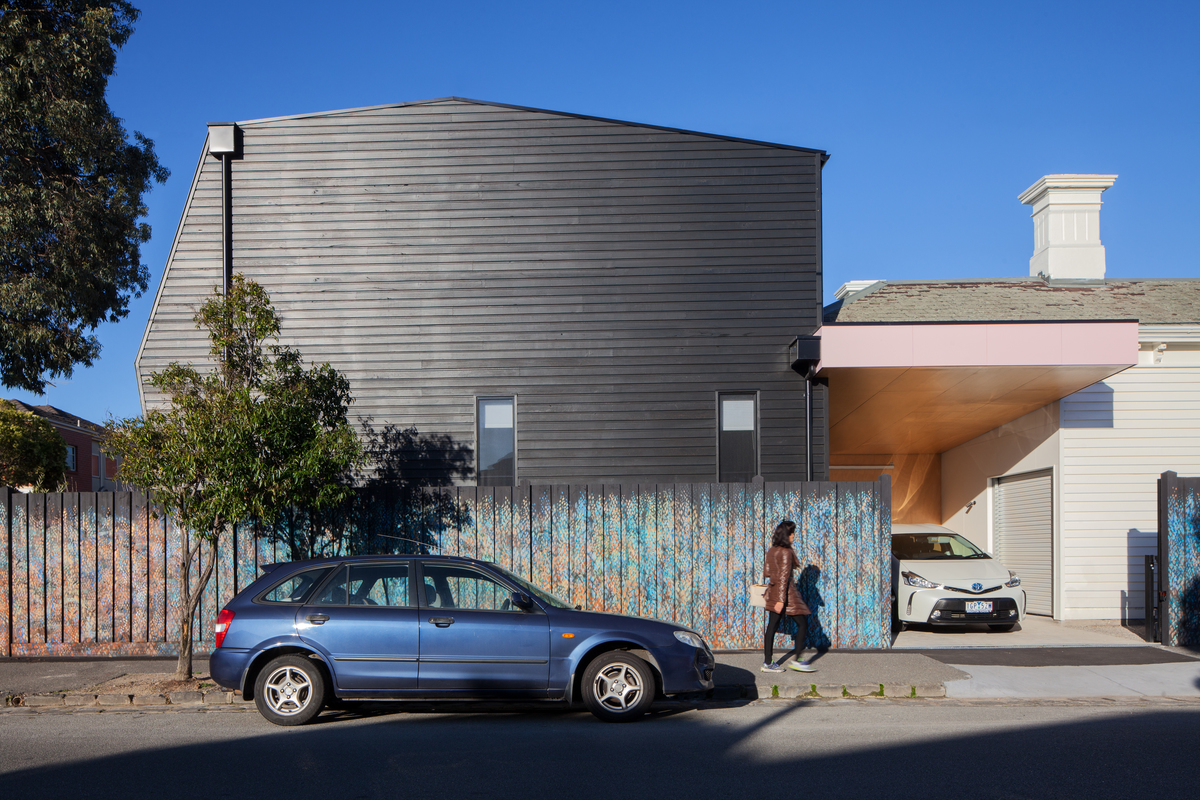 The west elevation (facing the side street) is a contrast between the original white weatherboard Edwardian cottage and the new extension, which is a deformed box, clad in timber and stained black.  A plywood canopy folds into the side of the original house to carve out a carport: serving to conjoin the two main volumes of the house. The north façade highlights the spaces behind, expressed by a pink fascia ribbon.

“The massing of the extension responds to various parameters,” explains architect Daniel Wolkenberg of POLYstudio. “Rather than a dumb box at the back of the house, it seeks to complement the original house by drawing on the form and geometry of the bay window and the roof-form. 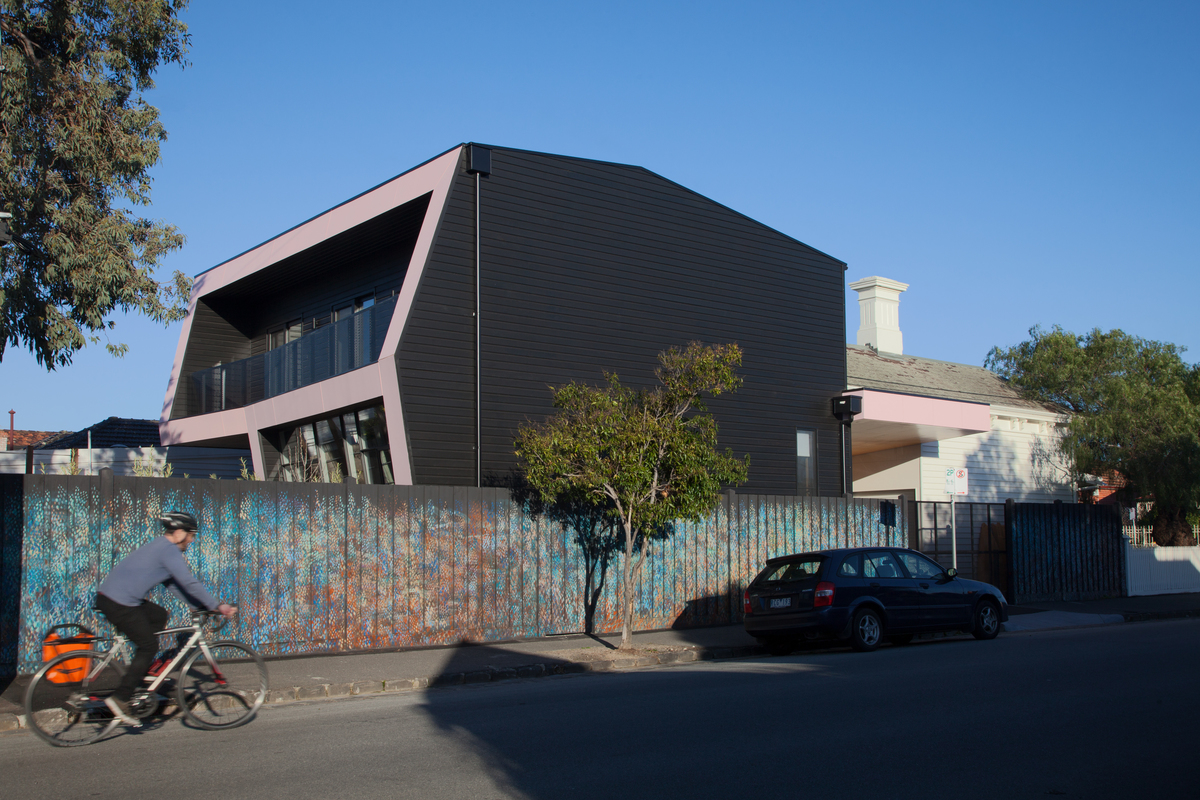 “The extension is pushed down on the south to minimise its visual impact on the original house. The form on the northern face is shaped to incorporate solar control – effectively forming a self-shading facade without the need for applied sun shading.” 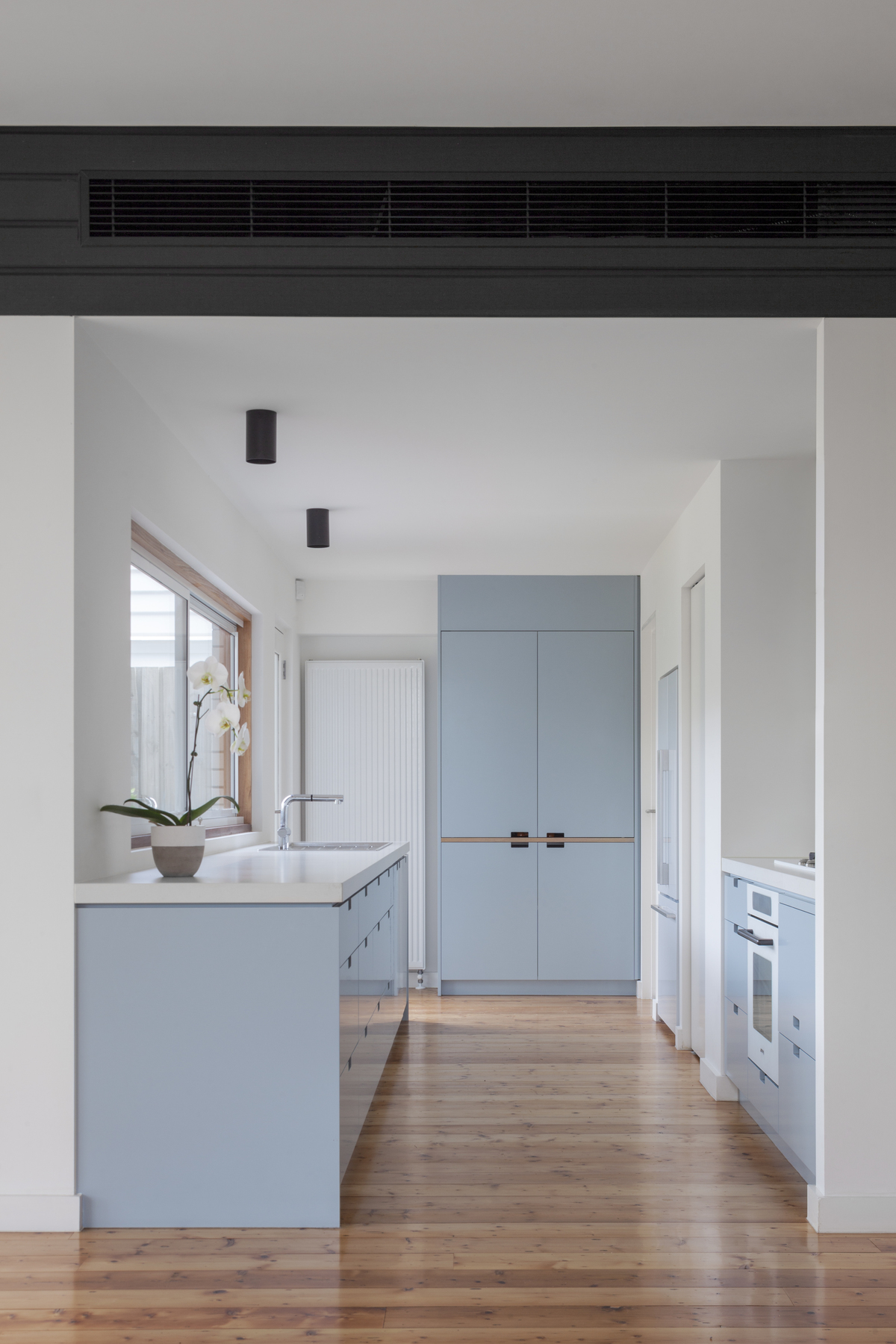 The internal planning of the house has been structured around a series of separate zones. The original house at the front comprises a parents’ zone including the master bedroom with walk in wardrobe and en suite bathroom as well as a generous study / home office.

The ground floor of the extension comprises a living and dining zone connected to the kitchen and laundry, oriented to the north and opening out to the garden.

The third key zone occupies the first floor of the extension and comprises the children’s bedrooms, which are oriented to the north and open out onto a shared balcony overlooking the garden. Off street parking has been located within the footprint of the original house to create a highly efficient floor plan that maximises the size of the back garden. 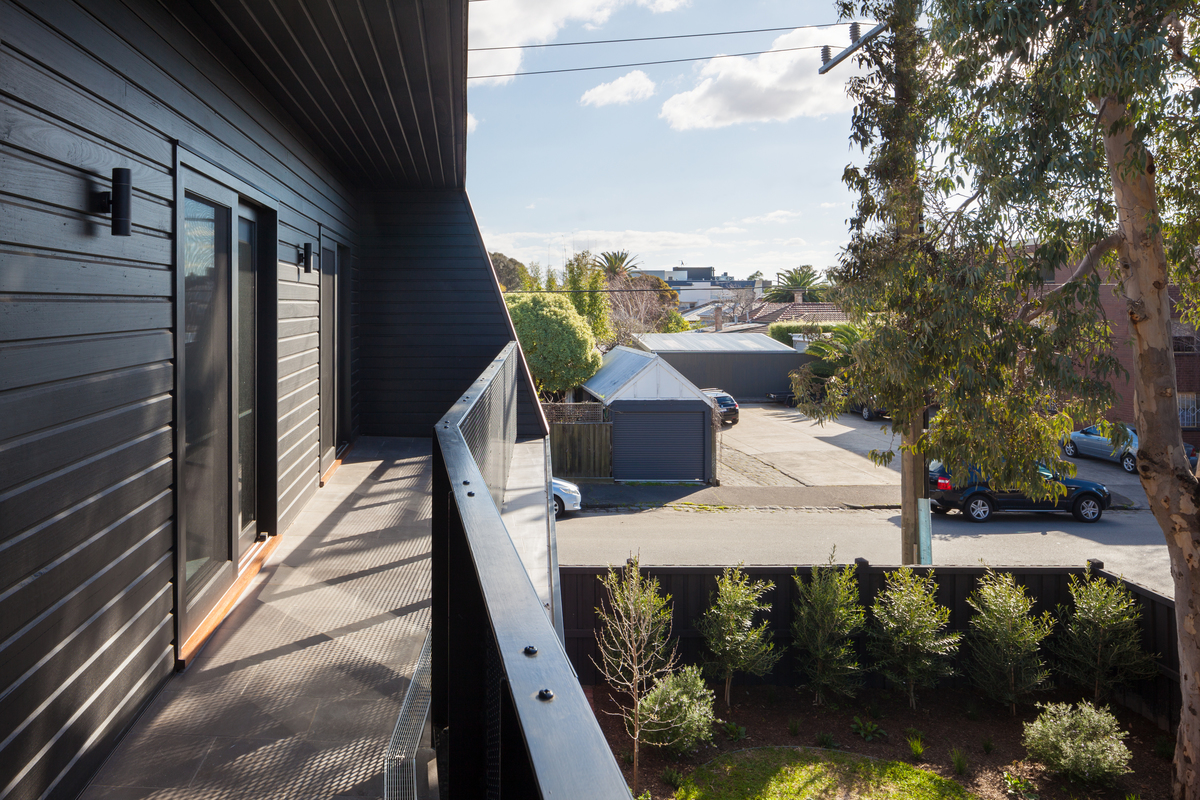 The house has also been designed to incorporate passive design principles. Key rooms and spaces are oriented to the north with effective solar shading, with a minimisation of windows facing east and west. Reverse brick veneer construction has also been adopted in the living space to incorporate thermal mass into the house. 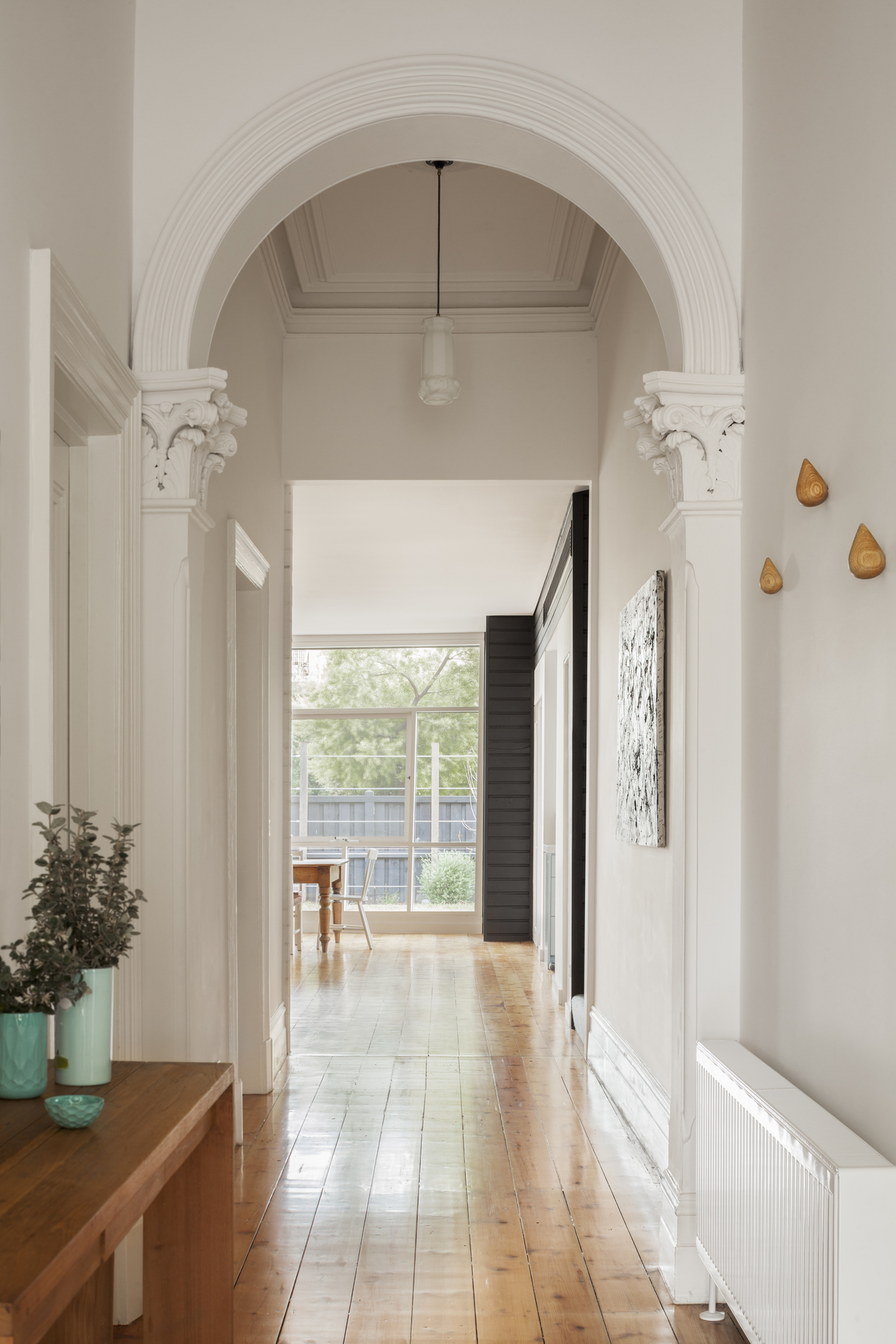 What not to miss at this weekend’s Open House