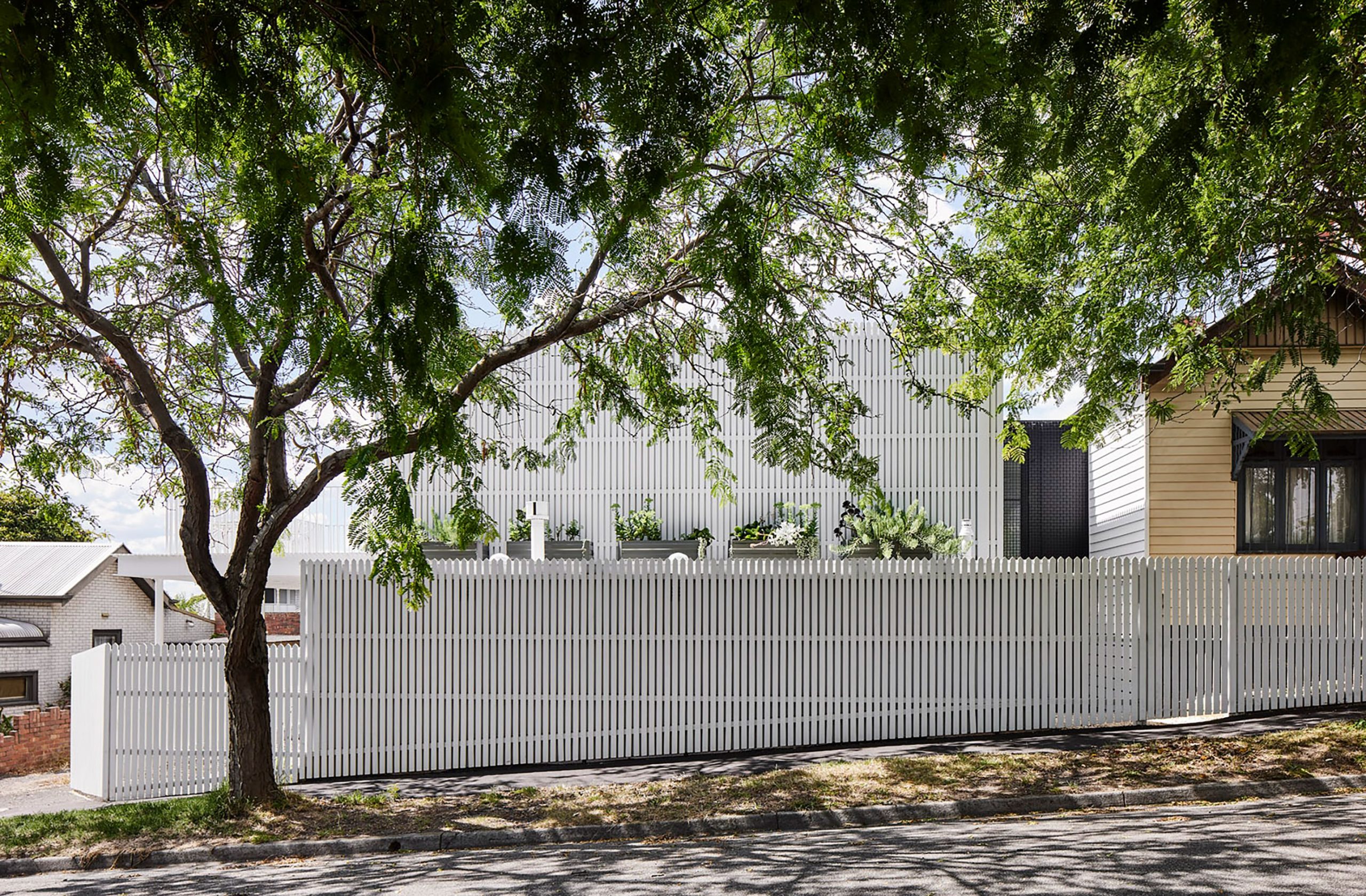 Located at the top of a hill in Northcote, Melbourne, Picket house by Austin Maynard Architects is a love letter to ‘dream suburban life in the 1940s and 50s’.

White picket fences are synonymous with mid-century residential design. Described by the Smithsonian magazine as a “visual shorthand for the good life”, the picket fence also experienced a revival in the 1980s as new urbanists encouraged potential residents by offering a sense of safety and homeliness.

Originally a neglected sharehouse, Picket house is a two-storey addition to a freestanding Edwardian timber home.

Possessing hints of personality concealed under the mask of an old, unkept weatherboard, Picket house now stands tall with a delineated silhouette, addressing the desire to build ‘lighter’.

“You can see through a picket fence, you can have a conversation through it. Unlike a brick wall, a picket fence allows for friendly, neighbourly interaction,” Austin Maynard Architects tells ADR.

“Having relocated the new addition along the southern boundary to maximise northern light, we sought to address the outcome of added bulk along the street. Rather than build a high contemporary box and high wall, we took a lighter approach.”

To achieve this, Austin Maynard sank the new addition to reduce the height and observed the suburban typology of the area.

Aesthetically and financially beneficial, white pickets reinvented the need for a side fence. During the design process, the typical fence material of the paling became the external cladding too, which hid the lower level wall of the addition on the southern side and encased the entire first floor in white pickets.

Moving around the house, concealed shutters were included within the paling line on the northern side to provide sun protection, while the western side featured rotated pickets to take advantage of the view, while also offering some shade.

Austin Maynard also trimmed the decking timber at the edges to match the palings, as if fence palings had been laid flat to become decking.

“The white picket fence is a relatable and easily identified element of the suburban landscape – a friendly device that defines the division between neighbours.

“The white palings at Picket house make it distinct from the old house, but not a foreign object, [rather] an object clad in a suburban friendly coat.”

In designing the interiors, Austin Maynard’s approach was all about bold colours and finishes.

Within the new addition a rich palette of materials and textures – such as brass detailing, mirror, terrazzo, polished concrete, saturated navy cabinetry and wall finishes – established much needed charm and character in the ground floor living space, playing against the crisp white exteriors.

“We wanted a new build that had a ’60s modernist vibe and that wasn’t easy for the builders, we know. We collected so many things over the years –furniture, art, the old French chateau doors (now the front door) and all the Danish lighting fittings that we’ve been holding on to for almost 10 years,” say Picket house owners Zoe and Merez.

“We’re really happy we were able to bring all these older elements into the new part.”

With the personable and functional touch of Austin Maynard, Picket house is now a celebration of past and present architecture as one entity.

“We love how Picket house became all about living, while the old part is a dormitory. That’s where the link between the old and the new is quite dramatic,” say the clients.

“It’s not a huge space but having the light and volume was so important. We love the progression of steps, coming down and seeing the levels and the light and the terrazzo.

“We just love the space. It’s a joy to live in a beautifully designed home that works for us.”

Founded in 2002 by Andrew Maynard, Austin Maynard Architects is an architecture practice based in Fitzroy, Victoria.