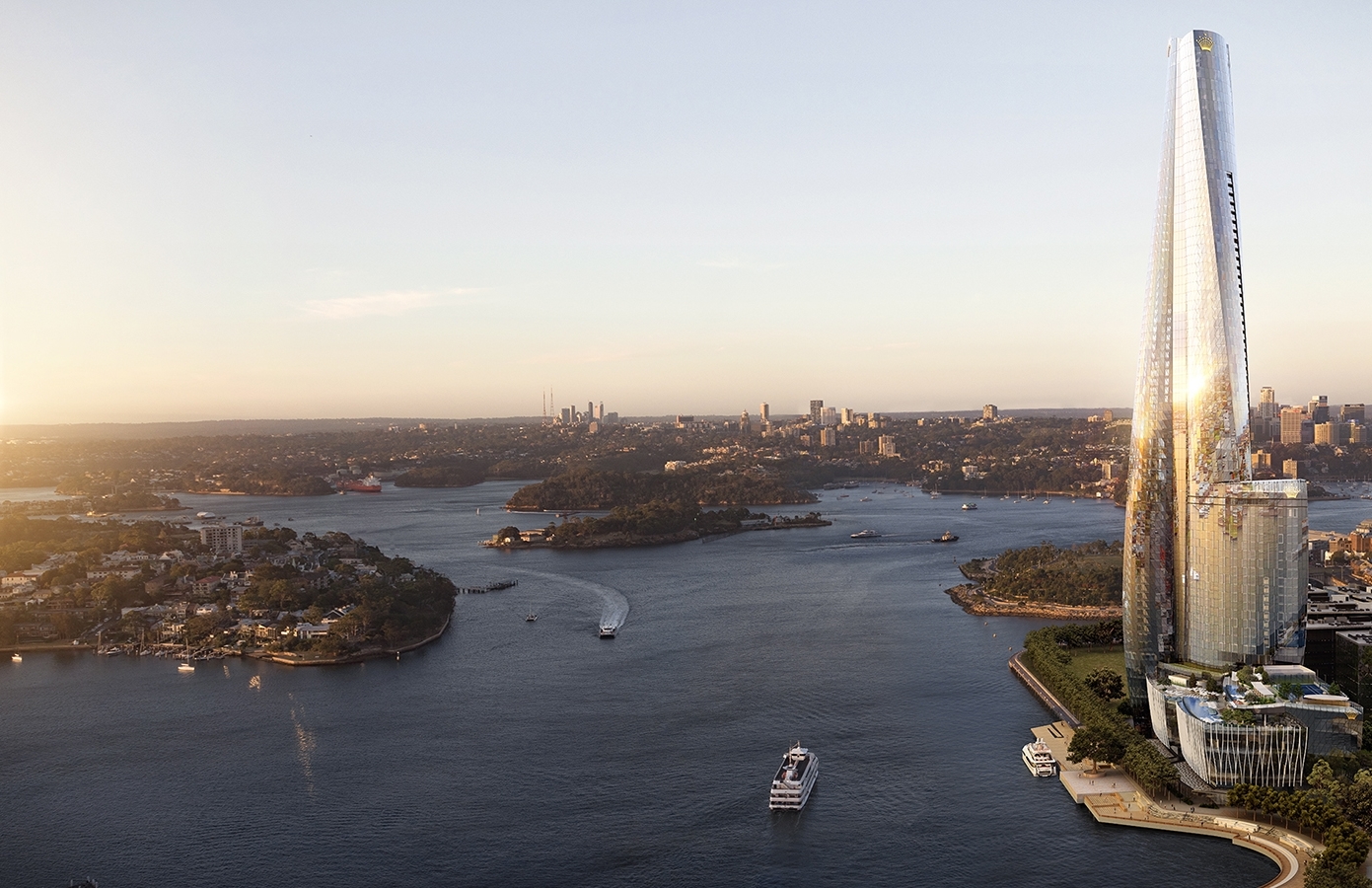 From sculpture to skyscraper – discussing the design process with Chris Wilkinson

In 2013, WilkinsonEyre principal Chris Wilkinson was puzzling over the brief for the new Crown hotel in Sydney while on Christmas holiday at the family home in Lucca, Italy.

“I spent most of the Christmas going through this brief. It was very detailed with the spaces they wanted, plus or minus figures for the area,” he says.

“When I’m in Italy, I can think because the phone stops ringing. So I just sat and thought and I came up with this idea that it had to be a sculptural form.”

The brief was an international design competition for One Barangaroo, Australia’s first branded residences, a building that would sit beside Renzo Piano’s trio of towers inspired by the “constant kaleidoscopic motion of colour and sparkle” on the waterfront in East Darling Harbour.

The sculptural form that sprung to Wilkinson’s mind was a piece he had designed with his wife and son for a 2011 competition to adorn the Gretna Landmark, on the border between England and Scotland.

The sail-like design symbolising wind and sea, the Solway Firth and Scotland’s past, present and future wasn’t selected and funding problems eventually nixed the project all together, but Wilkinson didn’t abandon the design.

“I looked back at the sculpture and thought those three petals that twist as they rise could be joined at the tips to create a building,” he says.

“So when I went back to the office after Christmas, I assembled a team, put it in 3D and saw the parametric design.

“We’re working with Arup and we asked them, ‘How on earth do we make this work?’

“You normally have a central core in your tower, which provides stability, but it needs to be buttressed by the perimeter column. The problem with our design was that the perimeter columns follow the curve of the building. The columns are actually curving and link through to the core without rigour structures.”

Whatever WilkinsonEyre did, it worked and the design was selected, but the challenges didn’t end there.

Crown’s latest offering is a resort hotel and residence, which means swimming pools, tennis courts, gyms and plenty of other things that don’t really fit into a petal-shaped tower.

WilkisonEyre added a podium, but Crown wasn’t impressed. The design was too simple, so the studio suggested Gothic architecture-inspired stone tracery in Carrara marble.

“They said they’d do it if they could afford it,” Wilkinson says.

“So now you have this incredible monument that is a whole new concept for a city building. Another layer that dresses it up and creates something quite strong in the landscape and also quite unique.”

It also provides an interesting contrast to the reflective surface that covers the tower and keeps energy levels down.

Another key consideration in the design process was what Wilkinson calls “Instagram moments”.

The 74-year-old British architect is a prolific user of the social media platform, with almost 1500 fans. And after reproving this reporter for her own lacklustre Instagram presence, he explains why it’s such an important element for today’s architect.

“You might have talked about a memorable place in the past, beautiful views and all that, but now you can capture them,” he says.

“I don’t do selfies, but people like to photograph themselves in places.”

A similar concept is being explored in the soon-to-be-opened Lancemore Crossley St hotel in Melbourne, which is being designed by Carr and includes a “selfie spot” at the front entrance.

In Crown Sydney, that ‘spot’ are the terraces that wrap almost entirely around the tower and the tennis court, in particular, which will be surfaced with a specially-commissioned work from a local Indigenous artist.

While the upper levels are reserved for hotel guests and residents, the restaurants and cafes on the ground floor will be open and accessible, along with the waterfront gardens that connect the tower to Headland Park.

But there is one area that Wilkinson is particularly excited about, even if no one will ever get to walk on it – the roof.

“How the tower finishes on the skyline was very important to me,” he says.

“In the past, they used to put all the plant at the top. But we’ve taken quite a lot of trouble to make it look interesting.

“We wanted to execute a sculpturally important building in the skyline of Sydney, so we’ve crafted these petals expressed up in the sky level, and we’ve moved the plant to the intermediate levels to keep the roof free.”

Wilkinson says he didn’t take into consideration the other buildings that will complete the One Sydney Harbour development, looking instead towards the waterfront.

“I absolutely love Sydney. I’ve described it as a 21st century Venice on steroids.

“The way the sculptural form of the tower curves around the waterfront creates a special relationship. It isn’t just a sort of mechanical box. It’s actually a form.”

As for the sculpture that inspired the entire process? You can see a miniature version of it at the hotel’s entrance.

Crown Sydney is set to be completed in 2021.

This is WilkinsonEyre’s second building in Australia. The practice also designed Swinburne University’s Advanced Manufacturing and Design Centre in 2014.