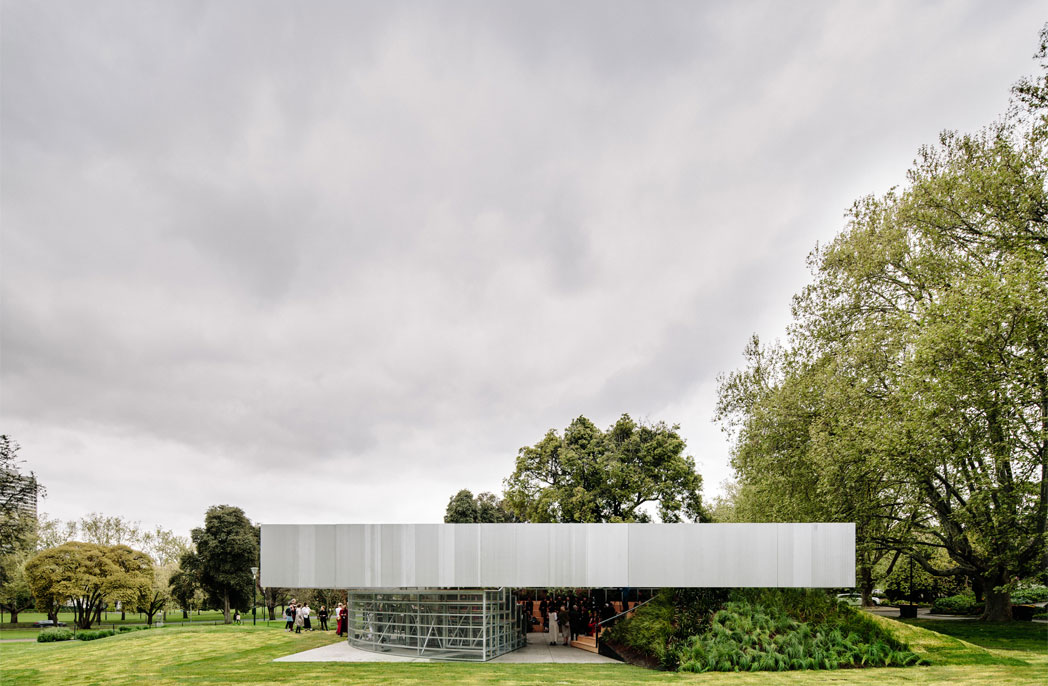 The 2017 MPavilion is the fourth annual installment of the summer space and program. This year the temporary pavilion has been designed by internationally-acclaimed firm OMA. The project marks the first completed building in Australia to be designed by OMA founder Rem Koolhaus and managing partner David Gianotten. Koolhaus has been visiting Australia for the first time in 40 years and many events have already taken place to commemorate the opening, including a packed out opening MTalk and a public lecture in collaboration with Melbourne School of Design.

The space was officially opened on Monday 2 October by Naomi Milgrom AO of the Naomi Milgrom Foundation, alongside Robert Doyle AC, Lord Mayor of Melbourne and the two MPavilion architects.

When talking about the power of the pavilion, Koolhaus explained that the design is a tool to further debate and discussion. “Our design for MPavilion 2017 is intended to provoke all kinds of activities through its configurable nature and a materiality that relates to its direct surroundings. We are happy that MPavilion can perform as a theatre of debate around the city and its development, and contribute to the ongoing civic discourse of Melbourne,” say Koolhaus and Gianotten.

Milgrom adds that, “Rem and David’s profound vision and insight has resulted in an extraordinary pavilion for Melbourne.”

The design sits sleekly within the garden surrounds, but its simplistic appearance belies much more intricacies and details. The 19 by 19-metre aluminium roof floats out from a man-made hill of native plants, propped up on one side by a rotatable grandstand. This moveable element is critical to the driving concept, which was inspired by ancient amphitheatres. It also means the space is adaptable, changing and opening up to the city, or drawing itself in for more intimate affairs. The deeply gridded roof component is semi-translucent and houses lighting that enables the space to be lit up in the evenings.

The 2017 MPavilion is made possible by the Naomi Milgrom Foundation with support from the City of Melbourne and the Victorian State Government through Creative Victoria and ANZ.

Take a look at the extended program of events for the 2017 MPavilion.