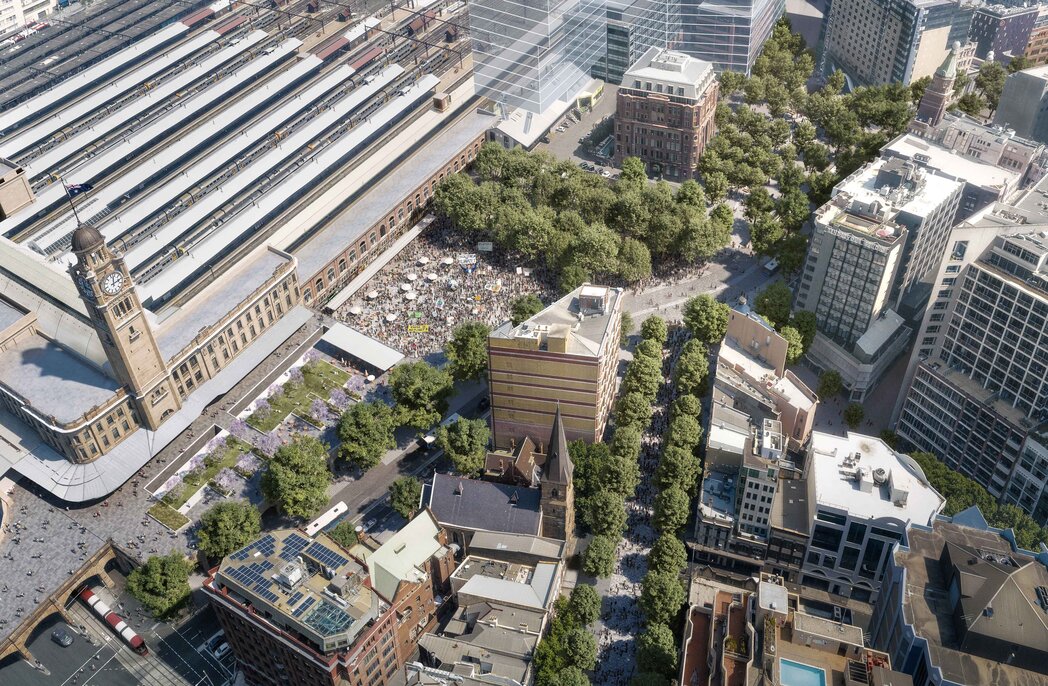 A major new public square at Sydney’s Central station is one step closer, with the City of Sydney releasing its vision for a high-tech, green and people-friendly precinct.

The square will complement the NSW Government’s plans for Tech Central, a new 250,000 sqm technology and innovation precinct next to Central Station.

“This concept is an opportunity to realise our vision of a public square at Central Station as one of three major public spaces connected by a people-friendly spine along George Street,” the Lord Mayor said.

“It’s an idea that will underpin Tech Central and give identity and space to the city as a whole.

“With increasing numbers of workers and visitors expected in the area over the next 20 years, we need more safe and comfortable spaces for people.

“High quality public open space is essential for our global city and good for our economy, environment and wellbeing. By creating wonderful public spaces, we ensure Sydney is an attractive place for businesses, residents and visitors.”

The new technology and innovation precinct planned at Central is expected to bring an influx of workers to the area in the future. Central Square will attract new businesses to the precinct and support the area’s younger demographic.

Transport infrastructure changes in the area include the new light rail and metro projects and the pedestrianisation of George Street. These will reduce bus and car traffic, and allow more space for people walking along the major corridors leading to Central Square.

The City’s plans are to create a cool, green and comfortable public space to be used both day and night.

It is a space focused on youth, visitors, public transport users, university students and local workers. The plans also celebrate and build on the area’s unique heritage.

Central Square will be designed with four connected spaces:

Central Walk West (Western Walk) – a clear and generous path leading to the future Central Walk, the passage replacing the Devonshire Street tunnel. With significant tree planting, large numbers of people will be able to walk comfortably between Central Station and a wide pedestrian crossing at George Street, Pitt Street and Quay Street.

Lower Square – next to the heritage brick station buildings, this will be a highly active space, with seating and shade, suitable for activity 24 hours a day.

Upper Square – next to the Central Station Grand Concourse and connecting through to Belmore Park, this quiet and passive space will complement the upper concourse and Belmore Park and provide a space where people can rest and relax.

Railway Square – shaded by trees, this cool, green, urban space will use increased footpath widths on the east and west sides of Broadway and provide spaces for people to sit and relax.

“Central Square is part of our work to help the safe movement of people, create a vibrant 24/7 city and increase our sustainability by providing new green spaces,” the Lord Mayor said.

In our first Post-Viral Design series, Dr Judy Bush, lecturer in Urban Planning at the University of Melbourne, said that the social isolation necessitated by COVID-19 has only increased the value of accessible urban urban spaces.