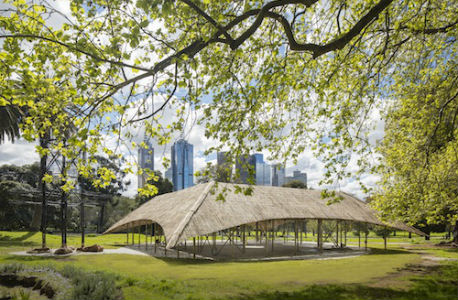 Now in its third incarnation, the 2016 MPavilion, designed by renowned Indian architect Bijoy Jain, was officially opened in Melbourne on Tuesday 4 October.

MPavilion is an annual initiative by the Naomi Milgrom Foundation, supported by the City of Melbourne and the Victorian State Government, which commissions international architects to design a summer pavilion, nestled in the Victorian Gardens across from the iconic NGV.

This kicks off a summer-long season of cross-cultural events and installations, enriching the city of Melbourne and encouraging human connection through design. Throughout the four-month program from October to February, a series of free public events, workshops and performances will unfold under the bamboo, rope and slatted Karvi-stick structure.

In stark contrast to the high-tech 2015 pavilion designed by British architect Amanda Levete of A_LA, this year’s design fuses two cities and two cultures through its exploration of materiality and place. Drawing on the vernacular influences of Bijoy Jain’s architecture practice, Studio Mumbai, the 16.8 square metre Pavilion incorporates traditional craftsmanship through the construction of 7km of imported bamboo poles, 5,000 wooden pins and 26km of rope. Weaving Melbourne into the story, the organic structure sits confidently upon a floor of bluestone, quarried in from nearby Port Fairy, Victoria.

As part of the construction process, builders from Kane Construction visited Mumbai to learn building techniques first-hand, with those master craftsmen then travelling to Melbourne to complete the pavilion on site. A true collaboration between Melbourne and Mumbai. Just as the architect commented on his design intent,

“MPavilion is a space for the people of Melbourne to gather, talk, think and to reflect. My objective has not just been to create a new building, but to capture the spirit of the place by choosing the right materials, respecting the surrounding nature and working collaboratively with local craftspeople to share design and construction ideas.”

Bijoy Jain’s MPavilion will have a legacy that lives on at the close of the 2016/17 season, just as Sean Godsell’s 2014 Pavilion and Amanda Levete’s 2015 Pavilion have now been permanently relocated across Melbourne.

Ten of the best pavilions from Dubai Expo 2020