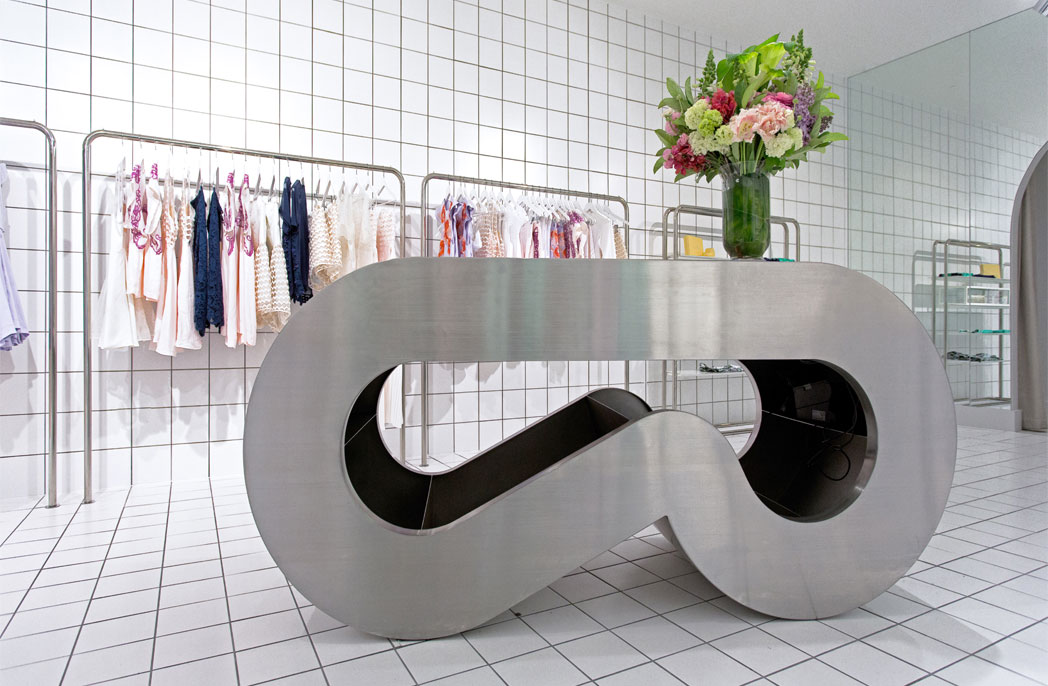 Janos Korban and Stefanie Flaubert met in 1986 while working in Stuttgart, but it was not until 1993, when they started working together that the idea of Korban/Flaubert (KF) was born. With a balance of expertise, Korban was working in metal and had previously had a three-year partnership with KM Hardwork (he also had a fabulous studio) and Flaubert was working as an architect with Günter Behnisch, Behnisch Architekten’s long lead time projects, while fulfilling, lacked immediate satisfaction). It was their shared passion for creating design that fuelled the studio’s inception.

“We both just wanted to make stuff, so we started to work together to make things, to make objects,” says Flaubert. And make stuff they did with an inaugural exhibition of 10 chaise longues, which they exhibited in a friend’s ware- house and former piano factory. By 1995, they were back in Australia with Flaubert still working in architecture, but with a shifted focus to set up shop and explore design more thoroughly.

By 1999 their place in Australian design was assured with the highly successful and eminently photographable Membrane chaise longue (it was an inside cover image in 2003). Essentially a bent tube of electro-polished stainless steel, the chaise was significantly different to anything currently available with a mesh surface exhibiting a moiré effect, graceful form and visual clout. Moreover, it signified the direction KF would become known for – that is a highly sculptural form with practical application. Effectively, this has been true of everything that has come from the studio since with its plastic stools, in particular Bongo, Swell, Tuff and Bump providing essential colour, form and seating in equal parts. “It goes back to a Japanese theme, we wanted our shapes to be like tribal artefacts and primitive forms: really super simple,” says Flaubert.

It is easy to forget how revolutionary these stools actually were, with Korban pointing out the thinking of the time: “We tried to do the Australian standard testing, which said mount the four feet to the ground, but of course there were no feet.” Korban’s expertise in metalwork has allowed the couple an exploration of material solutions of extraordinary breadth. Pursuing two directions, again it is difficult to separate the sculptural form from the practical application, as both the sculptural works and screens exhibit qualities of presence and practicality in equal measure. The Cellscreen of anodised aluminium is arguably the most celebrated of the KF designs, with installations of considerable scale such as Colacion Studio’s extraordinary design for the Tandem Group in Kuwait and Geyer’s beautiful installation for Australia Post. “We really have to thank all those architects and designers for their support; they have really supported us for a long time,” says Flaubert, who points out that her role as an architect gave her access and connection to the A&D community and the courage to take up product design.

Perpetually expanding their repertoire – it is worth remembering that they started their design journey with an exhibition of 10 chaise longues – Korban and Flaubert continue to produce designs at a cracking pace. Tables, screens, chairs, the fabulous KF Drum in stainless steel or the incredibly beautiful Jetstream, are all within their current body of products. All of which could be classified as sculpture, until the KF sculpture range is seen.

“We wanted our shapes to be like tribal artefacts and primitive forms: really super simple.” Stefanie Flaubert

Varying from relaxed and unfurling ribbons of steel, rust and colour, to tight folded zigzags and explorations of turned geometrics, the compositional elements of the couple’s sculpture is constantly surprising. Designed as wall, floor or standing pieces, the sculptures can also be hung. Commissioned by ML Design to create a bespoke piece for King George Central in Brisbane, KF developed Unison, 2012, an eight by 7.5 by 2.7-metre ribbon of steel exploring “fluidity and contained energy”.

“An animated line in metal traces the outline of a fluid form, creating shifting shapes as people walk by,” they say. Another commission of note is the astounding counter-piece for the Alice McCall Westfield Sydney store, which posits functions and sculptural form as wholly commensurate.

Whether of the complexity, rhythm and form of the screens, simplicity of the stools or elegance of the sculptures, there is a signature to the KF oeuvre that runs deep. Similarly, the colours KF uses are slightly recognisable and always exactly the colour to love. The aqua and leaf green, for example, could not be more now, while the birch grey and charcoal are heading towards the smoky look of 2017. That said, the yellow and magenta could not be more gorgeous. And herein lies the rub, KF’s designs are not about fashion, rather the studio defines a project as uniquely of its own design, thought and appeal.