Home • Architecture • Building a place of welcome: the Guesthouse 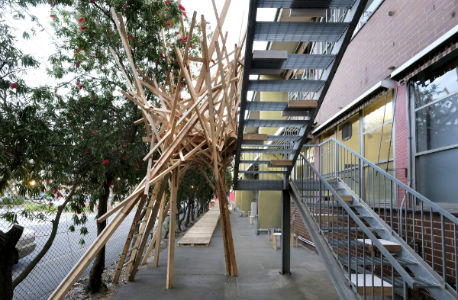 Building a place of welcome: the Guesthouse

Above: The ‘nest’ structure built by students. Written by Sara Kirby.

RMIT students have teamed up with Berlin-based architecture collective raumlabor.berlin and the local migrant community to design and build the Guesthouse, a project that highlights the migrant experience.

The project is set on the grounds of an old primary school in Melbourne’s Brunswick, a space which is now used for temporary infrastructure and operated by Testing Grounds.

“The idea of the Guesthouse is that it takes the principals of the traditional guesthouse and adapts them to the context of asylum seekers and refugees,” says lecturer and project leader Dr. Caroline Vains.

“We built a sequence of interventions that run together down a strip…there is a reception area, an inside out lounge – almost like a stage set – a common area, private spaces, a backyard and a kitchen. Regular elements of a guesthouse that have been freely adapted to this context.

“You cross bridges to go from the interventions on the outside to get to the interior, then there is a wild treehouse about 6 metres high that’s built like a bird’s nest. The treehouse started off as the idea of a hideout – like the interim position of being on the outside and the inside of a place or community. There is also an outdoor fire area, communicating the concept of being in a circle, and the idea that a circle can open easily to allow others to join,” she says.

The project began last year when Vains took a studio of students to Berlin, where she was introduced to Christof Mayer of raumlabor.berlin. She spoke to him about coming to Australia to help her out with the Guesthouse project, and a year later the project was underway.

“While the project was about unpacking the guesthouse, in a spatial manner, it was also about the principles of hosting and welcome. The other thing that was layered in conceptually is the idea of what it is to enter a place that you are unfamiliar with, a notion that is very real for migrants and refugees. But it’s happened to everyone in one way or another – you go to a party and hang on the edges for a bit, you may circle around and wait until your opportunity comes, then ultimately you find yourself as part of the group. The sequence of spaces in the Guesthouse work to map that out,” Vains says.

The students sought advice from the Asylum Seeker Resource Centre and other associations on their designs, gaining feedback and information on the nature of the migration experience in order to make the project as genuine as possible. Following that, building began.

“It was an extraordinary experience for everyone,” says Vains. “All the students went from being nervous about building to being absolute warriors. Everyone involved became fully invested, which is a rare thing from a group project.

“On about day three, there were six students carrying bricks from one side of the site to another, and this guy who lives over the road offered them a trolley. It turns out he’s on a bridging visa from Iran. His name is Nas, and he’s about the students’ age. He then joined in on the remainder of the process.

“It was that thing – the natural, spontaneous way that people can become involved rather than through formal organisation. There’s nothing like doing physical things that interests people and gets people involved,” she says.

“Community takes time, and drawing people in takes time. I know that temporary projects can only generally achieve a certain amount, but the community we have built is the part of the project that is something much bigger, bringing local practitioners together with new arrivals who have skills or aspire to have skills in architecture or design.”

The Guesthouse’s subtitle is “refugees, migration and inclusive communities through design,” so the aim of the project has been to see how design can be leveraged as an instrument of social inclusion and cohesion. The building process has proved successful in this space, while the family day, which is being held this weekend, works to broaden that community even further.

“At the family day we will have a 10-piece Asylum Seeker Resource Centre Ethiopian World Music band play and an African banquet cooked by The Social Studio – an initiative that provides refugees with fashion and café training,” Vains says.

“There will also be workshops for young people run by students,  there will be dance workshops, origami workshops, fashion workshops. There will be a mural on the wall that people are asked to contribute to and two exhibitions on display, including play equipment made for asylum seeker playgroups in Broadmeadows.”

The family day and party is open to everyone and will be held on Saturday October 15 from 1pm – 5pm at 33 Saxon St, Brunswick. Find out more and join the celebration.

List of fabulous student participants should include Jacquie Requeima. My oversight Jacquie:(

Thanks for the update, Jacquie has been added to the list.

Wow, very impressive work! The open day was extremely enjoyable too and had a wonderful atmosphere!