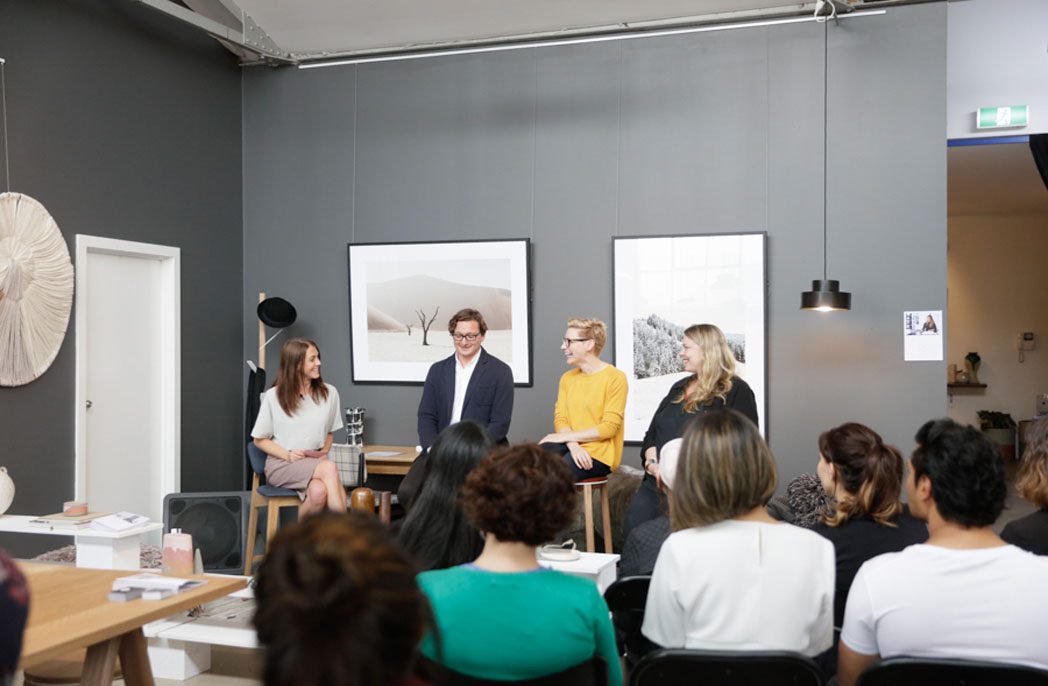 What really happens in a design studio? Figr Architecture, Maike Studio and CMD reveal all

From arguments with builders to timber factories burning down (yes, that really happened!) the real life of a design studio isn’t as glamorous as you might believe. ADR editor Natalie Mortimer recently hosted a panel at the Design Co-op  during Melbourne Design Week and spoke to Michael Artemenko of Figr Architecture, Mairead Murphy of Maike Studio and Camilla Molders of Camilla Molders Design to find out the truth behind running a practice. Below is an edited version.

What has been your biggest challenge to date in the studio and how did you tackle it?

Mairead: It’s not been a particular event; it’s more been the challenge of having the confidence to back myself. When you first start out you’re trying to feel your way through every process and coming from big design firms there was a whole bunch of stuff that I was never exposed to, so the challenge has been getting my head around the entire gamut of a studio.

You don’t have an HR department, you don’t have a marketing department and you have to think about what you want all of those things to be. I definitely wasn’t expecting the business side to be as big of a part of it and I also wasn’t expecting to enjoy that part of it as much as I am. I wasn’t expecting having to strategize as much as I do: so I have to think about work flow and how many projects you can handle and whether you might grow or not grow and things like how you are going to present yourself through social media. I guess all of those things that you don’t really realise but they’ve all got to be thought about.

Camilla: The reality of being a designer is that it’s not all champagne, and the design part is miniscule – it’s everything else, it’s the paper work etc. Putting an order in for that beautiful chair takes forever and there are so many processes to go through.

Talk us through a failure that you’ve experienced, what was the reason you felt that you failed and how did that situation arise?

Michael: A lot of it has to do with the clients that you select, and they select you at the same time. Sometimes what happens is that you’ve got the best intentions, you want to address the brief and you want to do the best possible job every time: you pour your heart and soul in to it. But when those ideas don’t align with the client’s and you keep on pushing that’s when the failure happens and communication is the first thing to go: it’s almost like you are not listening to each other. Then slowly after that the relationship deteriorates.

What we try to do with our clients in everything that we do is to educate them about the process: what we do, how we go about it and what the end result is. Sometimes sharing your knowledge takes a lot of effort. Something that we struggle a lot with, and this is where the failure comes from, is expectation of brief versus budget. What we’ve learnt to do over time is to be very upfront and explicit about what that means and what you can achieve with a particular budget. Sometimes it’s quite hard to hear for the clients.

That’s one side of the fails; I guess that’s more of the business side. The other side, which I now have a rule about, is never answer to your client anything over the phone if you haven’t seen a sample of it. I want to get there on site, I want to have a look at it, and I have to make sure that everyone is happy.

Camilla: There’s fails constantly but my fails might be that a product doesn’t turn up on time or there is delay on something. I tell my clients early on that things are going to go wrong and no one is doing it to upset them or hurt them, but it’s about how we handle it and the process going forward.

When there are clients involved and you are dealing with emotions about their home, it’s something that is very personal; sometimes it can get exhausting to deal with.

What have these fails taught you and have they made you run your business in a different way?

Mairead: Something I’m trying to deal with now is education. When I did my first few projects I’d misunderstood that people got the general idea of how the process works. I would talk to them and go through everything but I underestimated the education that you go through as a process.

The reality shows on TV give people a false sense of what happens: they don’t show the process and everything that is involved. So it seems very easy and it seems like it just happens. But in reality you have things like the planning application that takes a year or the 100 pages of documentation that we produce: none of that is shown.

So I had expected people to understand what is involved, however their expectation is based on what they see on TV, so there was a misalignment. From understanding that I try really hard to put together a process that goes through how much is involved, where there might be timeframes we have no control over and really spell out the process, which I didn’t do at the start, as I didn’t really realise that was an issue. Doing this has definitely helped and it makes the whole process more settling as well.

What has been your biggest win so far and can you explain the story behind it?

Camilla: I concentrate on interiors and because the work is very paper trail-y I like to design as much as I can myself to keep things interesting. I design a lot of furniture and rugs from scratch so every win is when a client just understands and says yes let’s do it. My favourite was the first time I did a custom rug; I just had an idea that I mentioned to a client and she said, “Let’s do it”. I said, “Hang on I need to see if that’s actually going to work,” and she said “No, let’s just do it”.

Mairead: I think it’s not a matter of a big win, it’s all the little wins, every time you finish something. I recently had a client write to me out of the blue about a project I do about six years ago to say we love the house as much now as we did then. That really means you managed to respond to them properly. We get repeat clients and referrals and those things make you feel good.

Michael: For me it’s backing yourself and your own knowledge. I think in our practice that’s been one of the highlights and in particular our Courtyard House that relied very heavily on a timber ceiling, with the idea being a concrete floor with timber ceilings.

We were in the design presentation with the client and we had done so many images and renders and diagrams to explain why the timber ceiling is important and what the flow and effect will be. But the client said, “no timber ceiling, there’s too much timber.”

And we just thought, “No! the project will be ruined without it”. We explained that without it, the building would become very stark and white, almost a clinical space. So, we proposed a meeting to go over it, we put a BBQ on and tried to make it more of an honest conversation rather than one between architect and client. We wanted to speak to our clients like they were family or friends in a mutual ground-type scenario. We explained why it was so important and this went on for about five hours. After the meeting we still didn’t know if it was going ahead and my business partner and I looked at each other and said, “How do you think it went” and it really was a 50/50 chance.

We were really worried and sadly we got a phone call saying they weren’t going ahead. But then a week later I spoke to the builder and he said. “I thought they weren’t doing the timber ceiling” and said, “What do you mean?” He replied, “It’s back on I had to order the timber”.

I rang the client to see what had happened and he said, “Mate, you guys poured that much heart and soul in to convincing us, we thought if we don’t do this, this is something we might regret forever”.

Every time we catch up with them for dinner now they say thank you for convincing them. I think from now on whenever something happens that we strongly feel about like a design idea or at least what our agenda is, we really fight for it now but we do pick our battles: we aren’t going to fight over fabric or something that we don’t believe in but we will fight over those big design intent decisions.

What do you learn the most from? The challenges, wins, or fails?

Mairead: It’s definitely the fails, but it’s the wins that keep you going. Every time you get a win it gets your energy up and you can go in to the next thing and it keeps you positive.

Michael: I think it’s the fails that you are always having to be mindful of and knowing that they will always happen. It’s really important to learn from that and know that you can solve them. Part of us being professionals is to deal with challenges. The success is great, that’s almost the easy part, but it’s dealing with the speed humps that come up and your knowledge and experience is what gets our clients over the line.

Camilla: I’d say both. Both the wins and the fails I’ve learnt from. The fails, obviously, because you have the processes in place to not have that happen again but the wins give the confidence to push me a little bit further next time.