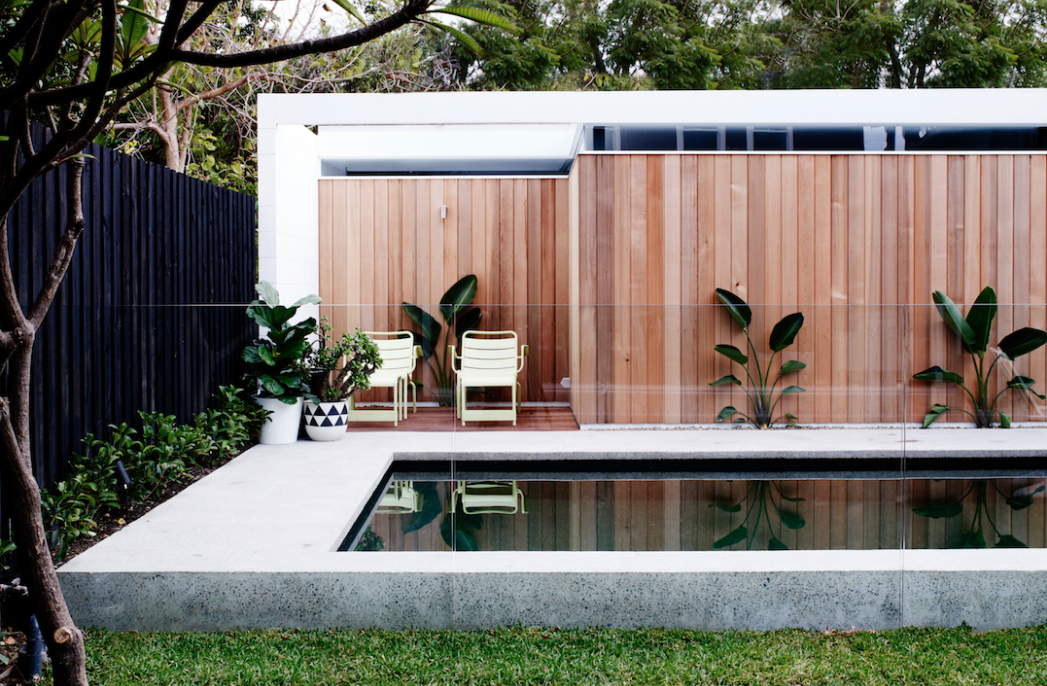 When two become one: Coogee house

“We bought a rundown art deco duplex (two two-bedroom units) with loads of character and lovely original features. It had lots of potential… but it only had external stairs.”

To take their 1920s duplex and convert it into a four-bedroom family home, Emma and Bruce needed to fit an internal staircase. “Additionally, we wanted to add on a new single-level living space at the back, opening onto the garden, plus a pool and a new garage with storage,” they say.

While the couple knew the duplex’s original floor plan would easily convert into what they wanted, they also knew it would be a project too big for them to handle without help, so they appointed Madeleine Blanchfield Architects to the job. 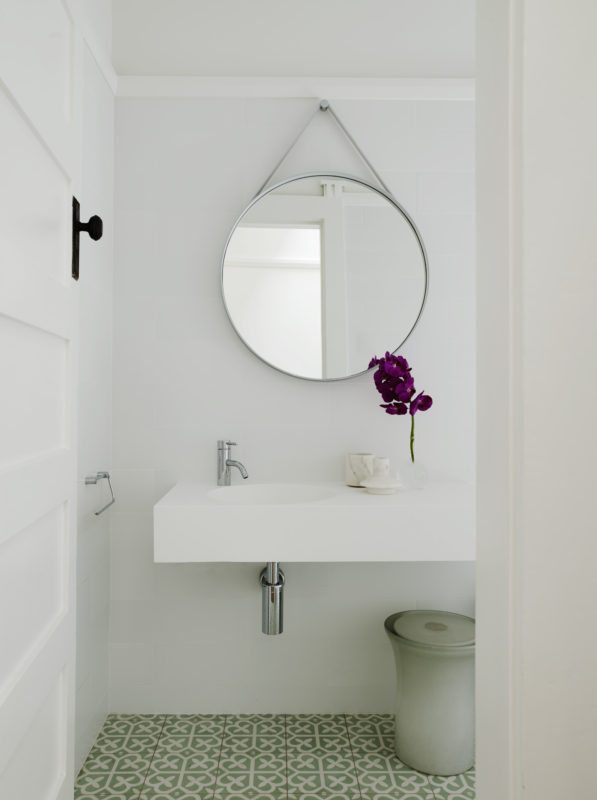 “We wanted the original building to stay old and the extension to look new. And we didn’t want anything too tricky or flashy,” they say – a brief that was achieved through the retention of as much of the original structure’s fabric as possible, while simultaneously repurposing rooms to suit modern life.

Flooring, doors and windows from the duplex were saved and used in different areas of the home, and existing glass doors were replicated to maintain the integrity of the old rooms. Existing finishes such as Carrara marble and oak were used in the new areas of the home to provide a gentle cohesion between old and new. 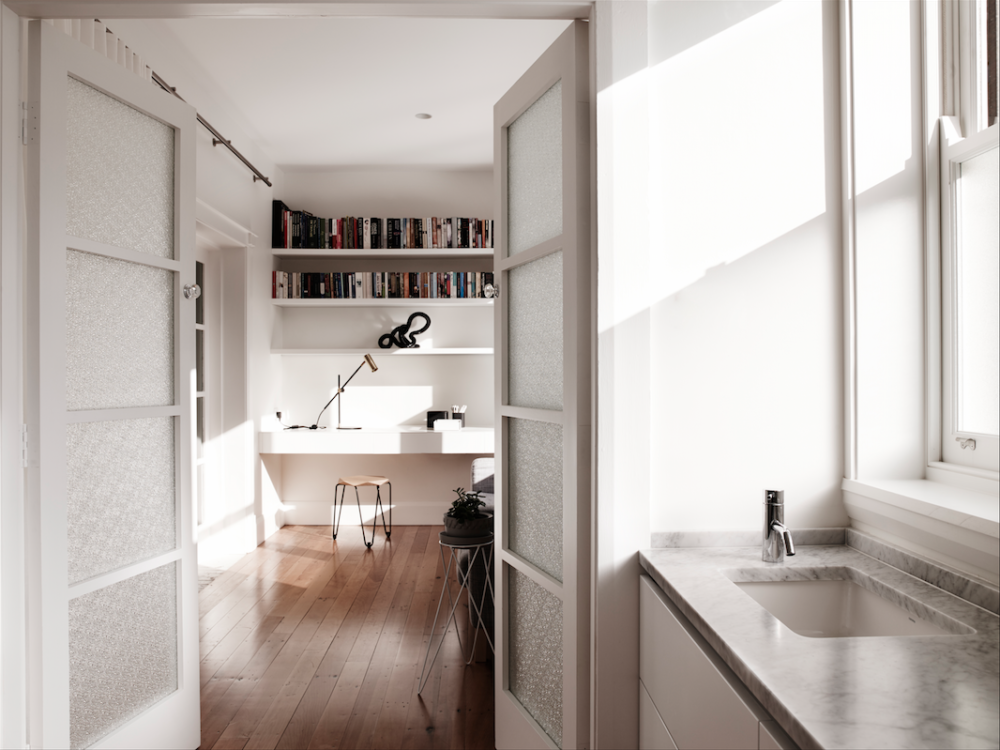 The new living space that Emma and Bruce wanted was inserted at the back of the home, and the bathrooms were all relocated. The kitchen was also relocated, and constructed in what was previously a living space.

“The kitchen is my favourite room,” Blanchfield says. “We retained all the art deco features from the lounge. The stove now sits within the old fireplace opening and a large island bench sits in the middle of the room. It’s an unusual room with lots of character and its proximity to the main living pavilion makes it a great and interesting space.” 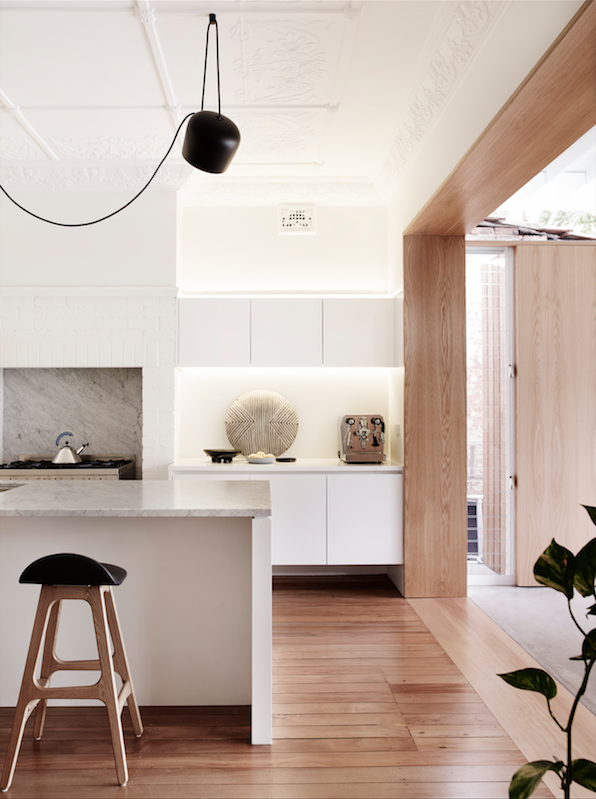 Emma, Bruce and their two children eat at the dining table most nights, which is bathed in sun during the afternoon thanks to the ceiling-height windows and glass doors. It is a perfect spot for doing homework or craft with the kids, the couple say: “The space is so light and airy that it feels like you’re outdoors, even on a cold day when the sliding doors are closed.”

The living space was designed as a flexible indoor/outdoor area, with the entire rear wall of the house bordered by full-height sliding doors. These doors can be slid across partially or completely, allowing the owners to open up the home to the backyard in a customisable fashion.

The design was developed in this way largely because the clients wanted a pool; however, there wasn’t a huge amount of space available in the backyard. Blanchfield then came up with the idea for an open plan living/dining area that had the ability to expand out into the garden, rather than having strict, separate indoor and outdoor areas and thus repeating furniture on an outdoor terrace. This saved space in the backyard and made both the extension and pool possible. “This was quite a brave move, but evidently a good one,” Blanchfield says. “It worked just as we hoped.”

Concrete flooring chosen for the living space makes cleaning easy, especially with two kids and a dog – it’s design that considers practicality as well as visual appeal. Further, an external side door to the downstairs bathroom means the kids can come in wet from the pool or sandy from the beach without messing up the whole house.

To connect the duplex and turn it into one seamless home, a staircase was carved through the existing bathrooms, which were stacked on top of one another and positioned in the centre of the home. 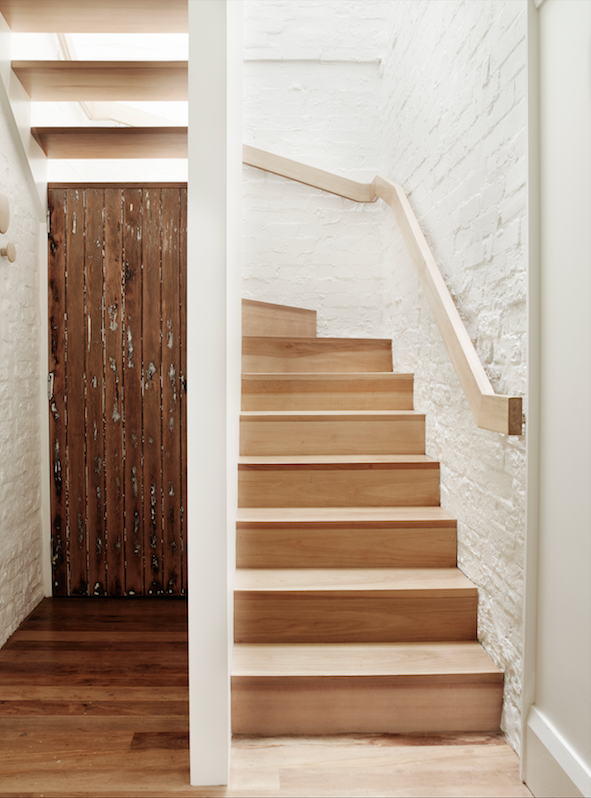 “The staircase is our favourite element,” say Emma and Bruce, “especially the illuminated hand rail. When the old bathroom tiles were removed, all the render fell off the walls and exposed the original brickwork. It was so beautiful that we decided to just paint the brickwork. We were worried about how the new stairs and the skylight would relate to the old space, but it works!”

The Coogee house is one with character and flow. It feels fresh and new, but retains undertones of its original 1920s style – made possible through an embracing of the original building’s character, and careful juxtaposition of its original fabric against understated contemporary additions. 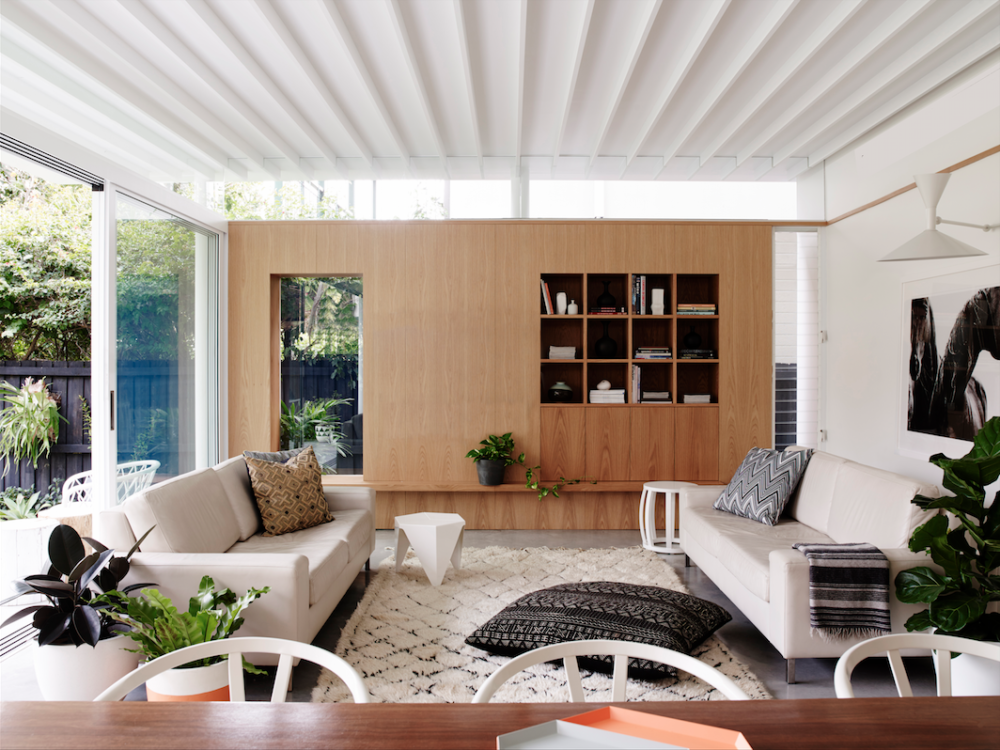 The renovation was completed just over two years ago and, since, Blanchfield and the clients have remained in touch. “I’ve gone back to the house and it was great to see it being used,” Blanchfield says, “particularly to see the kids in the pool and the new addition to the family (a pug puppy) on the lawn.”

Interested in renovations to Heritage buildings? Take a look at what Those Architects did with Ansarada’s Chicago office.

Discover the range of flush sliding locks from Halliday + Baillie