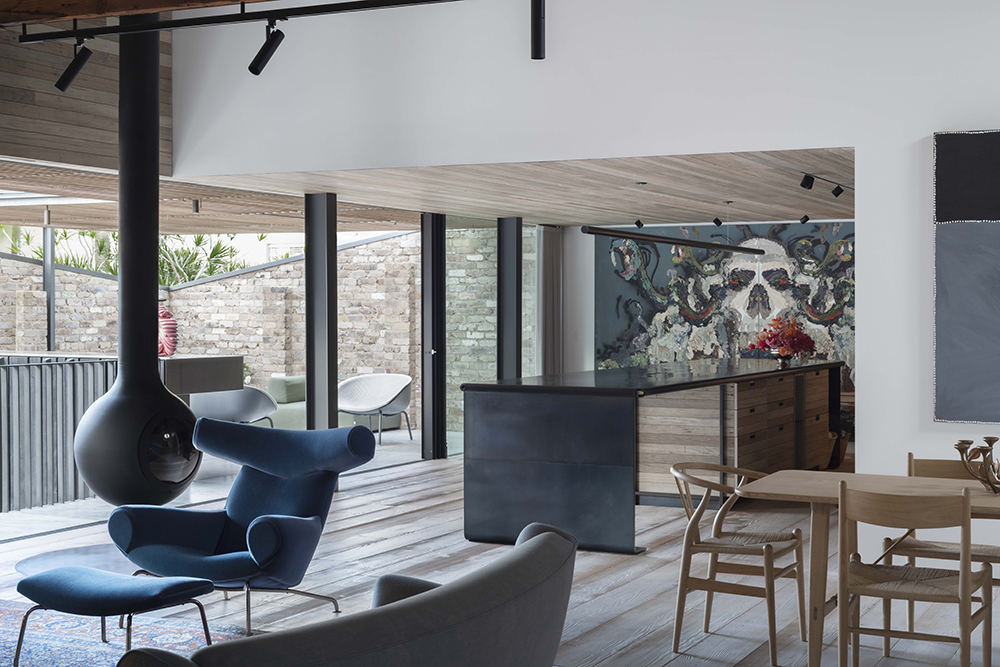 Virginia Kerridge Architects has used recycled materials to create a “durable, sustainable and beautiful” redesign of a Robin Boyd-winning home in Sydney.

Grant Pirrie House was originally built in the 1890s as a timber warehouse.

Fast forward another 20 years and the owners of the residential brick industrial warehouse wanted to reformat, while still “keeping a respectful eye” on what Jahn had done.

“The clients are the original owners that commissioned the previous renovation in the late nineties,” Virginia Kerridge tells ADR.

“The original house was in their words ‘a party house’, and now they were seeking more of a ‘home’.”

Jahn’s original design was “extremely strong spatially” and in its respect for the original building, emanating out from the north-facing courtyard area, which Kerridge describes as being reminiscent of Carlo Scarpa’s Brion Vega Cemetery.

A sculptural screen protected the ground floor rooms, while the original timber trusses were used as strong design elements.

“At the inception of the brief, the existing house was in a poor state of repair. Having been an award-winning building, we were very cognisant of this and aware that the new design needed to be extremely sensitive,” says Kerridge.

“We sent copies of the proposed design drawings to Graham Jahn for his comment.

Kerridge responded to the brief of “being at home”, by “making use of each area in a meaningful way”.

The ground floor was reshaped to become more multi-purpose with a garage workshop and laundry.

Here, the ceilings are colour coded according to activities by painting the underside of the concrete slabs.

A sitting area was also added to the client’s daughter’s bedroom and the guest room transformed into a yoga room to better reflect how the family used the spaces.

In the living area and master bedroom issues with overheating were addressed with generous external shading. An oculus window was added to allow cross ventilation from north to south.

“Internally, the surfaces work with sensory motor experiences and the house becomes a journey of discovery,” says Kerridge.

“Our aim was to create an authentic architectural experience that facilitated a sense of belonging and a yearning to stay at home.”

Kerridge used recycled materials throughout the project as a nod to “ideas of re-use and past occupation”.

Materials that had failed or were rotten were replaced with recycled materials where possible and low emission materials where they were not. Any bricks removed were cleaned and re-used.

“Materials have also been chosen for their natural weathering properties,” says Kerridge.

“The idea was that new work should be read as being different to the existing building, but be of a compatible material, so that the building becomes a seamless whole.”

The client’s art collection was also a key feature of the interiors and a favourite feature of Kerridge’s.

“I love the way their artwork has become entwined with the design of the house and how it has enhanced the whole experiential aspect and made going inside the house a complete adventure,” she says.

“The design process was a journey and so is the experience of the house.”

This isn’t the first warehouse redesign from Virginia Kerridge Architect. The Sydney practice is also behind Lilyfield warehouse, a landmark residence that was originally a candy factory.