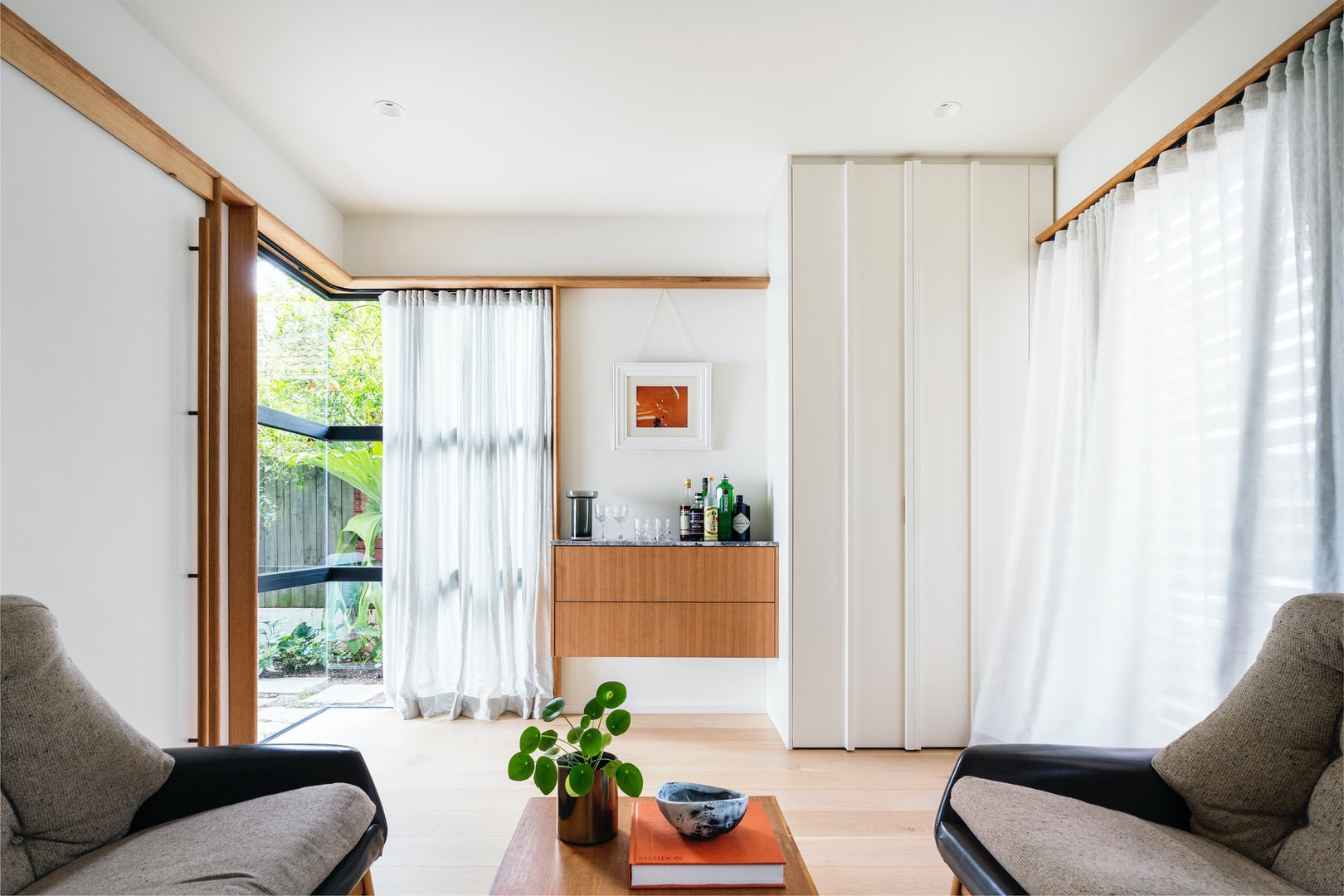 Applied to a narrow, long site typical of inner west Sydney, Leichhardt Machiya offers a variant to the typical ‘gun barrel’ terrace houses of the area.

“The house draws on the Kyo-Machiya in both its ordering principles and its architectural aesthetic elements,” Mariani tells ADR.

Traditionally, Machiya houses had a public, working shopfront to the house with a private rear living quarters behind.

The typology afforded the opportunity for a hierarchy of spaces to be created from public zone to private zone through different spatial and garden sequences.

For this property, Studio Haptic drew on the language of Japanese screens and used horizontal timber slats to present a private facade to the street when closed.

The front room of the house can completely open to the street and become the working ‘semi public’ room.  It was designed as a flexible space and a potential office/business front for Mariani.

Once through the gated screens, a passage garden of stone steppers and foliage leads to a garden porch and the “heart of the house”, the courtyard.

“We had a desire for a strong connection to the garden,” says Mariani.

“We wanted a house that was able to open to the outside and yet also easily close and allow privacy from the surrounding neighbours in the dense inner city,” he adds.

“The spatial layering, sequencing, and experience of Machiya houses is one that offers a symbiotic relationship between house and nature and is what we set out to achieve.”

Natural light was maximised through the central courtyard. Experienced as a “double height open air garden room”, it functions as a light well and connects to most of the ground level rooms.

A semi, a solid wall on the western boundary anchors the building with large operable glass facades to the courtyard, street and rear gardens.

At the upper level, the gable end forms of the home create a barn-like extrusion of bedrooms and bathroom spaces that inhabit the roof space. While the central stairwell acts as a vertical flue in the house, drawing air up and out the louvres at the high level of the courtyard.

Aesthetically, the interiors have a uniting thread of timber detailing with “strong vertical lines”.

The external walls are constructed as a ventilated timber facade with the air cavity continuing up over the roof to vented ridge caps. The horizontal timber screens juxtapose to the vertical black cladding battens.

“The house is not minimal, but it is searching for clarity, simplicity and ideally purity,” explains Mariani.

“[The design] creates a playful hierarchy of shape and a material language that echoes and draws inspiration from the detailing of Japanese interiors that create a feeling of balance and harmony.

“Materiality is the hero, used to create the grandeur of space more so than simple size itself.”

Leichhardt Machiya was shortlisted in the Residential Architecture – Houses (New) category in the NSW Architecture Awards.

Studio Haptic is a small Sydney-based architectural studio founded in 2009 and led by Mathew Mariani and Taj Jackson.