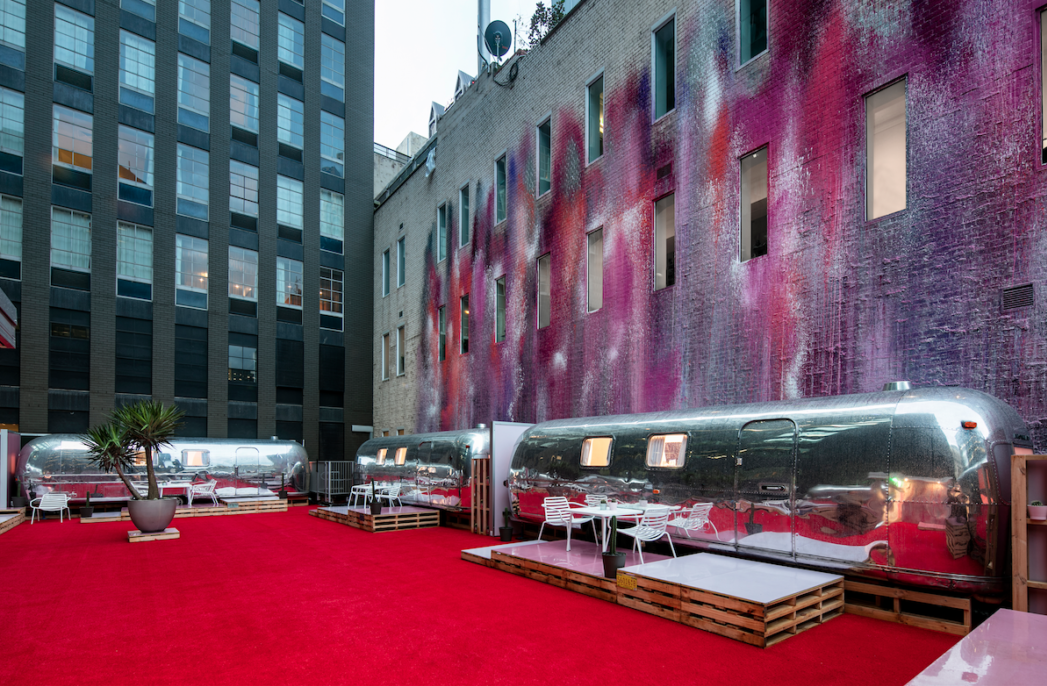 Are un-normal hotels the new normal?

In Melbourne, there is a hotel on the roof of another building. Actually, the ‘hotel’ is six Airstream caravan trailers, which collectively are called Notel. The name is short for ‘Not a Hotel’ and on the website, you’re invited to subscribe to ‘No News’. If you want a drink while you’re staying at Notel, you can order it at ‘No Bar.’

While the idea of staying in a pimped-out caravan on a rooftop may sound kitschy, it’s not. Thanks to clever design and strong conceptualisation, it’s actually quite luxurious. And it’s perfectly in line with the direction in which the hotel industry is currently headed. That is, in a direction that leads to the polar opposite of a cookie-cutter experience.

On an international level, there has been much said about the ‘design hotel’ trend. And while many have pinned this on what is being called ‘the Airbnb effect’, the move towards unique, quirky and  independent offerings has become so widespread that it has taken on a life of its own.

Probably one of the best-known examples of the design hotel boom globally is the Ace Hotel chain (although even ‘chain’ feels like a word of antiquity, associated as it is with the old giants such as Hilton and Novotel). Based in Portland, Oregon, Ace Hotels now has outposts in New York, Palm Springs, Panama City, Los Angeles, New Orleans, Pittsburgh and London, England. The Hotel’s clever marketing describes itself as ‘friendly’, ‘inclusive’, ‘soulful’, ‘human’ and full of ‘creative gumption’ – a direct contrast to the old order, in which cold and impersonal buzzwords like ‘luxury,’ ‘contemporary’ and ‘architecturally-designed’ reigned over press releases.

Whereas it used to be that the discerning traveller wanted to know what they could expect when they opened the door to their hotel room, now it seems that the need for comfort has been replaced by the desire for excitement. And Australian hoteliers have taken note.

James Fry, the owner of Melbourne’s Notel, wanted to do something different with the rooftop space he owned, but knew he needed to avoid kitsch. After all, it’s not just the young adventure-seeker who is drawn to these outside-the-box offerings; the audience – contrary to popular opinion – spans generations, industries and income levels.

“The original concept was to do different types of accommodation,” says Fry. “I wanted it to be all about Melbourne, so I had originally planned to use a tent, a caravan, a bus and a tram, and convert those all into sort of gimmicky accommodation. But then I found those [Airstream] caravans and I fell in love with them; they’re so sexy.”

After Fry and his team were done with them, the vintage Airstreams, which were imported from the US, became even sexier. Far from the cramped, 1970s camping experience, the six Airstreams that make up Notel have been polished down to a shiny mirror finish on the outside, and totally gutted on the inside.

“On the inside, we completely stripped them out, down to the bare bones,” says Fry. “We refitted them as very high-end hotel rooms with the help of Edwards Moore [in collaboration with Studio Edwards]. They did a really good job creating something that was a little bit space age-y.

“When you think about a caravan, you think about it being filled with the contents of an entire house – of it being very tight and cramped – but these caravans are not like that. On the inside, they [look like] very high-end hotel rooms.”

While from the outside these not-hotel rooms are clearly caravans, from the inside, you would never guess as much. Walking through a private courtyard and into the caravan, guests are confronted by a diagonal wall of translucent pink. Behind this luminous screen lies the bathroom – stocked with Malin + Goetz toiletries – as well as a closet. On the other end of the caravan lies a plush, queen-sized bed fitted with sheets that are just as queenly.

“For us, we wanted our design to surpass the expectations of our clients,” says Fry. “Having caravans on a roof is unique, so cool that it’s naturally going to spark people’s interest. But I wanted it to be more than just a gimmick. I wanted the fundamentals of a hotel – the sleep quality, the amenities – to be more than what people expected.

“One of the things we love is that we get people calling up afterwards wanting to buy our beds. They’ll call up asking what kind of beds we’ve used and we’ll give all the details, then they’ll go away and buy the mattress, the pillows, the sheets. They’ll just go and replicate it at home.” When was the last time you did that in a hotel chain?

Although the shift towards design hotels suggests that travellers are looking for more intimate and authentic experiences, it places such as Notel that signal this shift is not necessarily away from luxury. In fact, some of these new generation hotels are just as luxurious – if not more – than the high-end chains of yore.

Take Jackalope, another example of Australia’s design hotel boom, designed by Carr Design Group. Opened last year by Louis Li – a filmmaker in a former life – Jackalope is towards the higher end of the hotel luxury spectrum, while managing to remain every bit as eccentric as Notel.

Li describes Jackalope, which sits on Victoria’s Mornington Peninsula, as “an avant-garde brand” the fundamental objective of which is to help its guests “escape from reality”. To achieve this, Li has drawn on his filmmaking background to create a highly conceptual ‘narrative’ experience that takes visitors on a journey through alchemy.

The restaurant, for instance, is representative of the fermentation stage of alchemy. “We installed lights on the [ceiling] that change intensities to represent that bubbling,” says Li. “Suddenly, with this narrative cohesion, all of the art and design has a reason behind it. They’re telling the same story.”

With Jackalope, Li is hoping to target the high-end leisure and conference market – not difficult, when you have a fully functioning winery as part of your hotel. With his concept, he recognised that the shift away from cookie-cutter hotel chains was not just a millennial move towards more Airbnb-like experiences; it was an across-the-board change of expectations.

“People are becoming more and more curious about exciting things,” says Li. “People aren’t treating hotels as a two-night stay; they’re treating them as a destination. With social media and different blogs, people are more design-savvy. Nowadays, they’re travelling physically but also with their social media. They’re reading hundreds of posts every day. So it’s very hard to wow the crowd, much harder than 10 years ago.

“And we’re not just competing with Airbnb. Hoteliers are also now competing with people’s homes. With technology and progress and people travelling more, what can we do to make a hotel a better home? To cut through that homesickness [aspect]?”

For Li, the solution to the modern hoteliers’ dilemma was simple: to make Jackalope as personal as possible. “The formula of creating a luxury experience is becoming a bit common,” he says. “I take the project very, very personally. That’s the very important thing to forming authenticity: you have to be personal. I want people walking into a Jackalope, not to just walk into a hotel, but to walk into my mind. I’d like to treat people as my dearest friends to show them what I like and what I dislike. This kind of hotel has a point of view and a point of perspective: they’re seeing the world through my lenses.”

And, at the end of the day, if you had to choose between staying on a hyper-comfortable bed in space-age caravans, inside the mind of an avant-garde alchemist filmmaker, or to just stay at home, which would you choose?

Read more about the future of hotels with Rosie Morley.