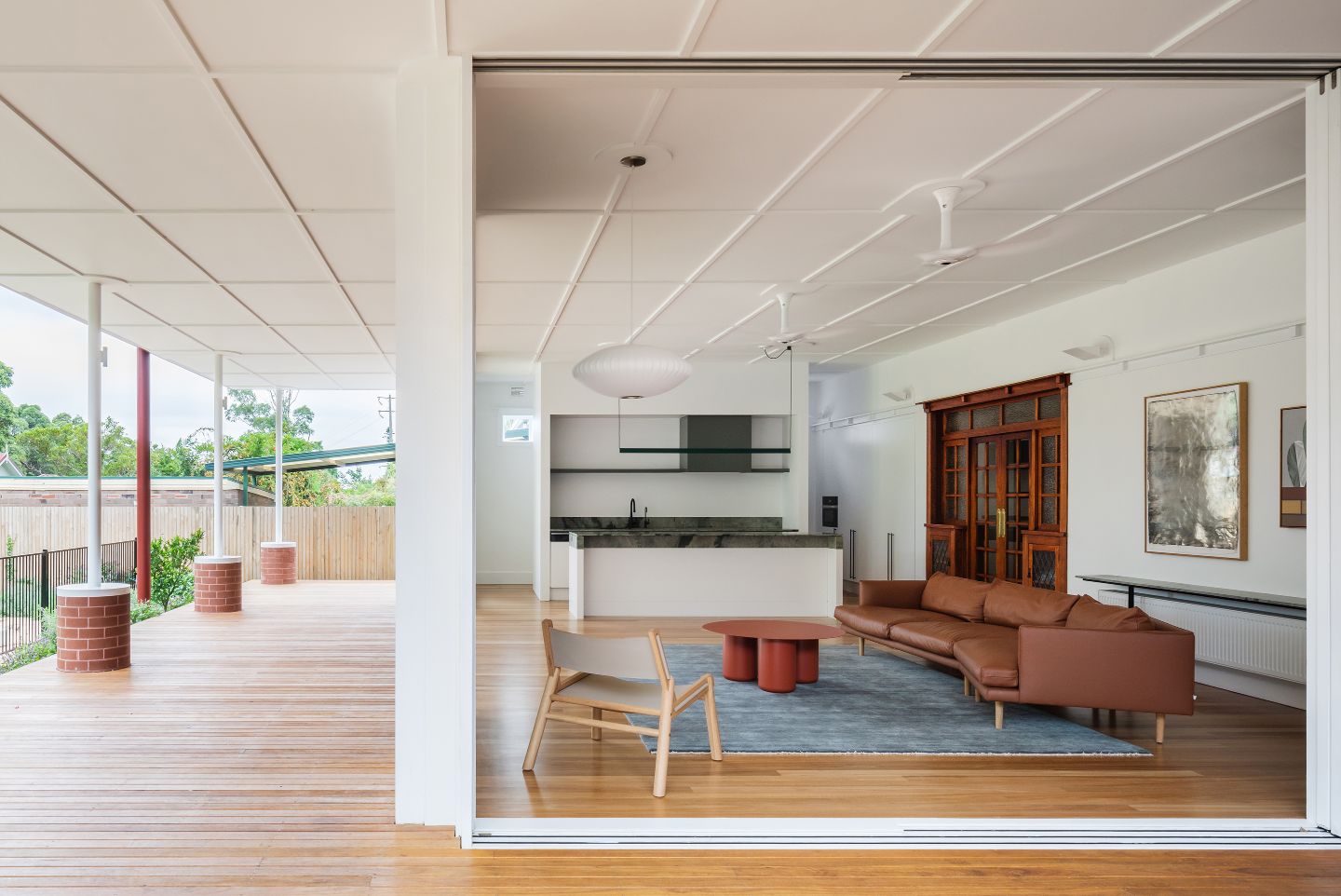 Embracing the “eclectic and experimental”, the local studio sought to “channel the spirit” of the two-storey interwar house, which had undergone numerous renovations.

“Originally built by the proprietor of a local lumber yard, the house had been the subject of experimentation throughout the decades with renovations in the 1950s and 1980s,” explains the studio.

“This had resulted in an eclectic mix of design elements including a river stone fireplace, decorative timber, stained glass and lead lighting.”

But rather than demolish the lot and start again, Tribe Studio Architects chose to highlight the “idiosyncratic nature” of the home, keeping, among other things, the frosted glass pirate ship door and many of the leadlight windows.

“We sought to understand and retain elements both native and sympathetic to the original build,” explains principal Hannah Tribe, “embracing the playful while paying respect to the unique aspects of the house added over the years.”

The renovation and extension of Dulwich Hill House centred around the back of the property, with the aim of connecting the house to the garden.

A new rear addition was designed with a bright red roof to complement its white walls and ceiling.

Designed by Fieldwork landscape design, the garden reflects a “playful approach to the architecture” with the studio dubbing it a “wildly contemporary take” on a cottage garden.

Back inside the rear addition, the updated kitchen connects directly to the outdoor spaces.

A new grey marbled countertop complements the grey appliances and fixtures, while the joinery is kept minimalistic white with black accents.

Elsewhere in the home, the original flat veneer panels and mock-Victorian decorative plaster ceiling mouldings have been maintained and celebrated.

Bright colours have been used to highlight built-in shelving and bathroom cabinetry, while white walls provide a backdrop for the family’s collection of prints and paintings.

Alongside its decision to restore rather than remove, Tribe Studio Architects further increased the sustainability of Dulwich Hill House by adding photovoltaics, water tanks and hydronic heating.

Stack and cross ventilation provided by high level skylights allow for an abundance of airflow and natural light throughout the house.

“In an act of spatial gymnastics, the total floor area of the house has increased while the volume and footprint have decreased,” concludes Tribe Studio Architects.

“This provides much needed breathing space for the family and a retreat from inner Sydney high-density living.”

Founded in 2003 by Tribe, Tribe Studio Architects is a studio-based Sydney design practice delivering projects ranging from a civic scale through to bespoke hardware.

Recently the studio tackled another renovation in Sydney’s south-eastern beaches, swapping poky and dark for airy and light-filled.