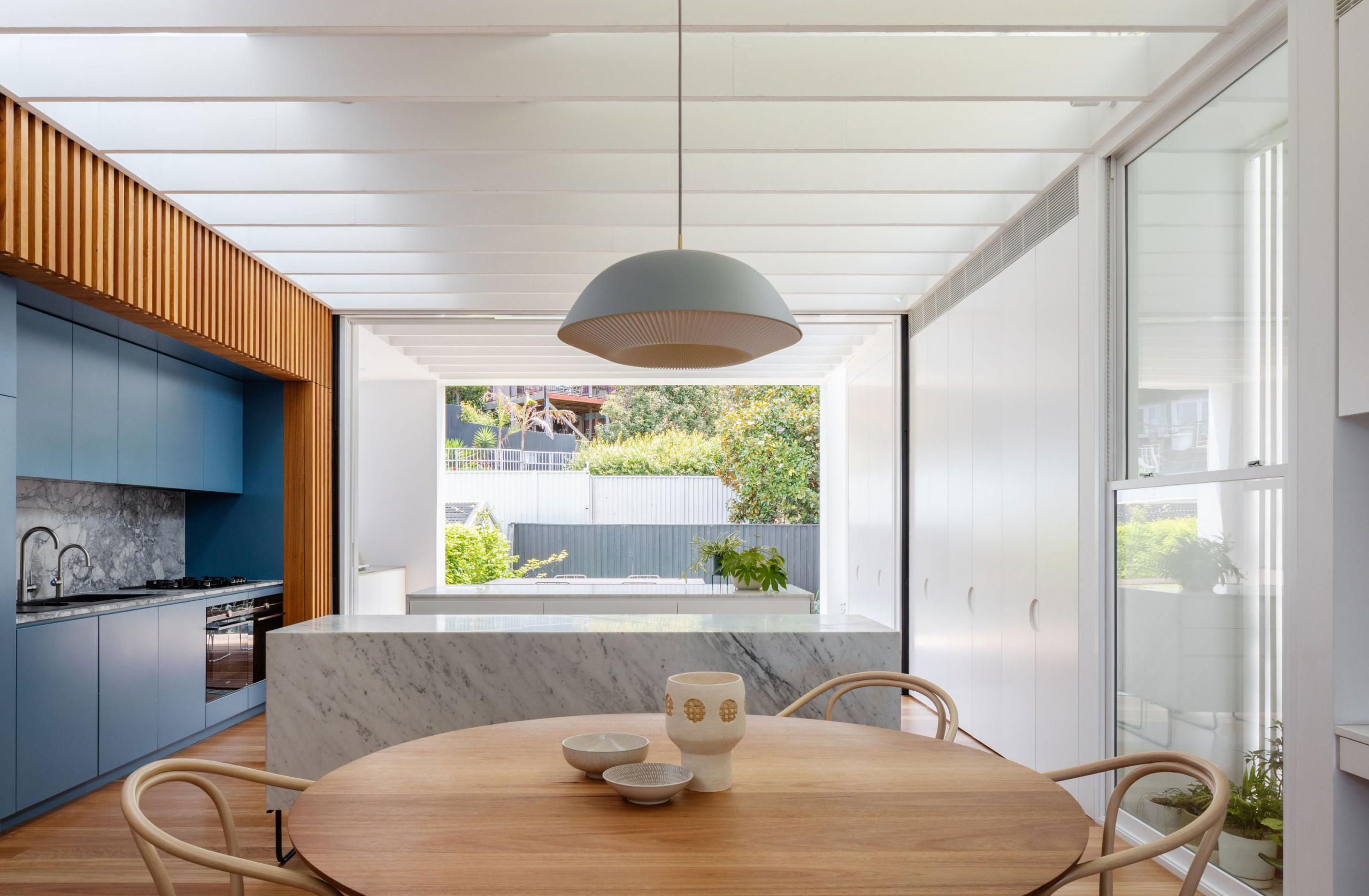 TRIBE Studio alters and adds to this family home on the Sydney coast, swapping poky and dark for airy and light-filled.

When the owners approached the studio, Clovelly House was an elevated single-storey dwelling with a gabled facade mirrored by its neighbour to give the street impression of one larger house.

The formal living was at the front of the house with a “poky kitchen” and lean-to laundry leading to the backyard.

“In the past, the street frontage of a semi-detached house was designed to present a strong and consistent face towards the street,” says TRIBE studio principal Hannah Tribe.

Designing for a family of five, TRIBE shuffled the spaces, moving the master bedroom and ensuite to the street-fronting position with access to a terrace over the double garage.

The children’s rooms are lined up along the north-face with a walk-through bathroom that provides direct access to the pool.

Open-plan living spaces are connected to the westerly-oriented garden with its jacaranda, frangipani and robinia tree, while the rear volume that partially encloses an entertaining terrace appears to “float over” the concrete blockwork that steps into the garden.

“By locating the living spaces on the top floor, we connected both to the view at the east and to the elevated garden in the west,” says Tribe.

While the existing brickwork of the original semi-detached dwelling was retained, reusing existing fabric and thermal mass, the roof was modified to evoke “origami cranes”.

Sculptural clerestory windows “drink in northerly light providing a refreshing sense of being both in and outdoors simultaneously”.

By reorienting the plan and adding heating to ground floor bedrooms, TRIBE removed the need for lights during the day and excessive heating in winter and cooling in summer – all features of the previous design.

The solar design of window shading assists in warming the home in winter, while cross ventilation cools in summer.

Inside, the material palette and detailing takes its inspiration from the board and batten detailing of the original gables.

“The building’s organisational strategy is services/joinery/stair along the party wall with open spaces to the north. We used the interior palette to reinforce this planning logic,” Tribe tells ADR.

The ‘shell’ space is a mixture of timber and board painted in white finishes, while the services spaces are clad in Australian hardwood with reveal elements, kitchen and stairs in a dusty blue paint that is “inherently misty, cool and nostalgic”, evoking the client’s Irish roots.

“The brief called for loads of sunlight, and the choice of white paint amplifies natural light and changes in character. It is crispy and cool in the morning, warm and glowing by afternoon,” says Tribe.

“Blackbutt is warm in tone and hardy in character so suitable for robust family beach activities.

“The great joy of this house is the sense of ambiguity. There is so much diffuse and direct light in the living spaces, and so much connection to garden, view, sky that you get an incredible sense of being both indoors and outdoors at the same time. It feels like a kind of threshold condition.”

Founded in 2003 by Hannah Tribe, the Sydney-based studio works in residential architecture with a site-specific approach. The studio recently created a warm and personal Sydney apartment.