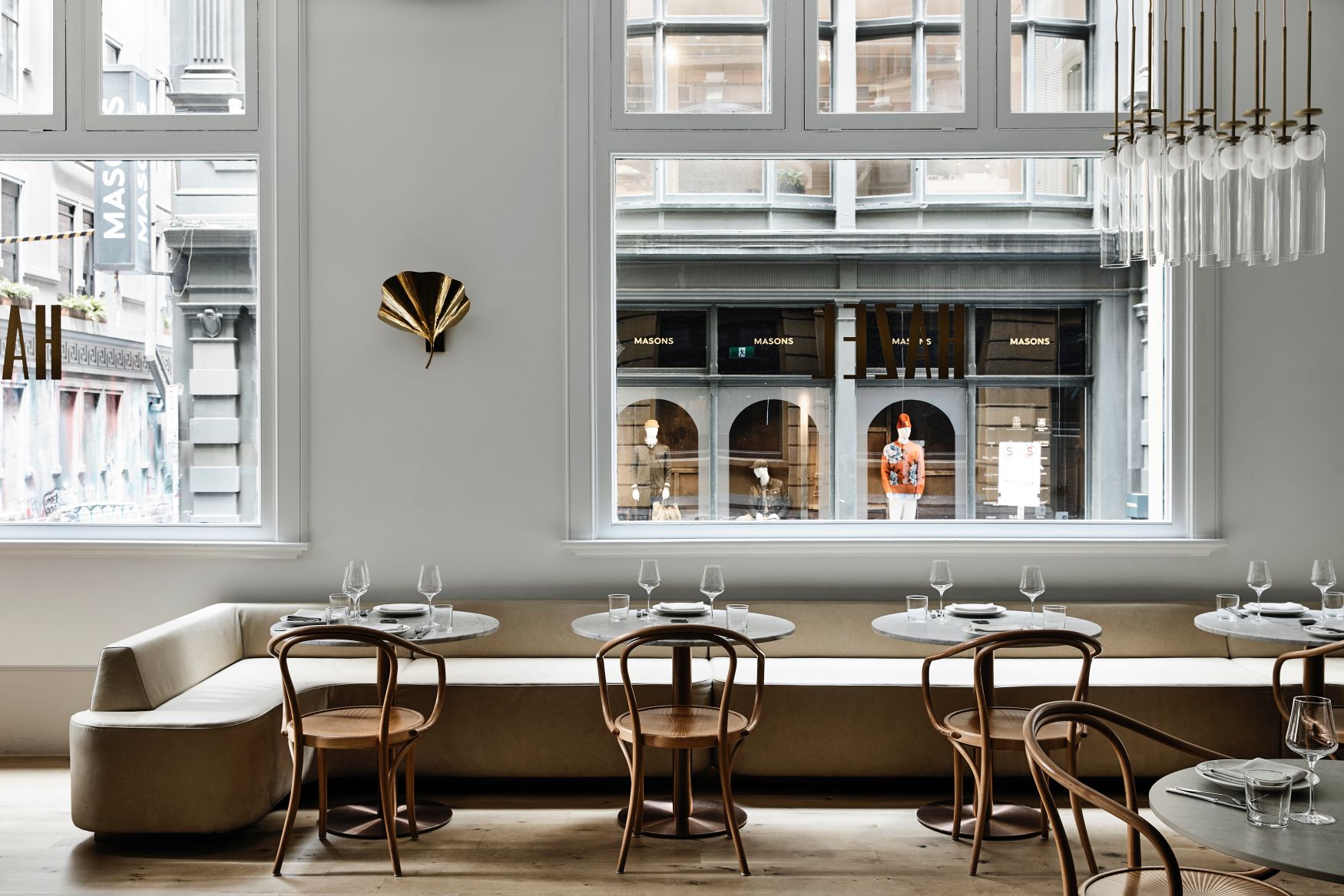 Against the backdrop of one of Melbourne’s oldest buildings, The Stella Collective’s Hazel channels the feminine rock goddess of a bygone era.

In the stairwell of one of Melbourne’s oldest buildings, a provocative image of a dark-haired beauty hangs as muse for The Stella Collective’s latest restaurant fitout.

“She is very much telling the story of Hazel. This beautiful, gorgeous cheeky girl, showing a little bit of tit. That’s the definitely the spirit of Hazel,” says the studio’s director Hana Hakim.

Painted by Joseph Wallace King, the piece is the most telling nod to the 1970s glamour that inspired the Melbourne studio. A golden frame and gold candelabra flank it – a taste of the gilded accents strewn throughout the space as the designers pay homage to the era of Studio 54 without the kitsch.

“We asked ourselves, ‘How do you create a feeling without doing anything recognisable?’ We wanted just a touch. We didn’t want people to walk in and say, ‘I know where that’s from… And that’s from…’ We wanted ’70s, but with clean lines and without bombarding people with crap,” says Hakim.

The brainchild of Mulberry Group CEO Nathan Toleman, Hazel occupies the ground and first floor of the Neo-Renaissance T&G Building on Melbourne’s Flinders Lane. It was designed as a contrast to its sister venue, Dessous, which sits in the building’s basement.

“Nathan envisioned two very distinct venues. Hazel was to be light, fresh and beautiful. A feminine rock ’70s goddess to Dessous’ dark arts of drinking messiness,” says Hakim. “But we knew from the get-go it was going to be a very, very difficult project thanks to the building’s age.”

Built between 1928 and 1959, the T&G Building has most recently been used for offices. The floors now occupied by Hazel came with a Heritage overlay, wall-to-floor carpet tile and plenty of issues.

“It was the hardest project Nathan and I have ever done. It nearly broke us. It was just round after round of being in the boxing ring with so many things being uncovered,” says Hakim.

“For example, the original building had the most amazing columns. They were one of the reasons why Nathan wanted the building to begin with. Unfortunately, we quickly found they were not structurally suitable for the change of use. We had to cover them up, which was just heartbreaking.

“The design almost came much later in the process. You knew in your heart what it was going to look like, but so much transformation had to happen to get to this real, functioning establishment that people felt had this great flow with everything working in harmony.”

With the original columns lost and the space gutted to accommodate a huge commercial kitchen with live flame as well as gas, The Stella Collective drew inspiration from the “beautiful people” the team envisioned dining at Hazel.

“I can’t really say, ‘Oh, we went back to the 1930s to celebrate the building’s history’ because the fitout’s very much a Bianca-Jagger-at-Studio-54-having-the-best-time-of-her-life feeling. That abundance and that real awesome ‘70s disco beat,” says Hakim.

Stepping in from Flinders Lane, Hazel is framed by a 1500-metre wide double-glazing wrapped in a ‘been-there-forever’-look bronze frame that immediately sets her apart from the dour office lobby.

With drama suitably established, the ground floor of the restaurant unfolds along American oak floorboards and a toffee-coloured palette of pale leather banquettes and pink-stone, subconsciously driving you to the level’s showstopper – the bar.

“We knew the open kitchen on the first floor would be everyone’s go-to space, so we wanted to create something just as dramatic downstairs,” says Hakim. “We put in an absolutely beautiful bar with custom designed chandeliers sporting an Arabian ’70s glamour.”

Behind it, a timber balustrade staircase ripped straight out of the pages of grand old Heritage home takes you to the first floor. Extravagant and commanding, the curvaceous structure is one of the most memorable features of the design, running alongside the exposed brickwork of the original building, and ascending, in style, to the enormous open playground of head chef Zac Nicholson (former head chef at Rockpool Bar and Grill).

It’s here you’ll find Hakim’s favourite corner – two banquette seats together opposite the kitchen and its large south-facing windows. “When you sit there, you just feel on top of the world. It’s a great feeling. A lovely moment in time,” he says.

Grandiose, but not ostentatious, Hazel doesn’t instinctively bear The Stella Collective stamp. The client, Toleman, guided the aesthetic with Hakim working to “sing his narrative the whole way through and make sure that that narrative was growing, evolving and really pushing the boundaries”, but perhaps there is a hint of the Melbourne studio in one of its least expected spaces – the bathrooms.

“That’s where we could have a lot of fun,” says Hakim. “Not that we didn’t have fun elsewhere, but everywhere else is quite neutral. We just wanted to pack a lot of punch in the bathrooms.”

Hakim infuses an element of the unexpected in what is often an overlooked space. It’s an international affair with London wallpaper “bringing the white tiger into the room”, antique French mirrors acquired from “a beautiful gentleman in Melbourne” and hand-blown Mark Douglass crystal-cut wall sconces coming together like a siren’s call, encouraging you to never leave or, at the very least, seriously consider wallpapering your bathroom at home.

“Oh and the smell,” says Hakim. “The bathroom’s smell. In a good way. They smell delightful.”

Revelling in the glory days of ’70s glamour, Hazel is a generational reboot celebrating culture, cuisine, thinking and design. Nestled in one of Melbourne’s oldest buildings, the space is as alluring and enigmatic as its playful painted muse, and almost as enticing.

The Stella Collective is a global design practice based in Melbourne. It’s headed by Hana Hakim, who is a judge for this year’s IDEA awards. The studio is also behind the Pine Avenue Townhouses.

This article originally appeared in the latest issue of inside magazine, on newsstands now!