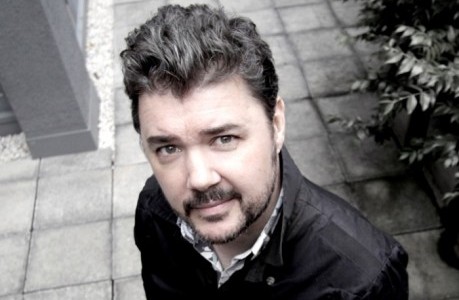 With a long list of award-winning works to his name, Gavin Harris is one of this country’s most prolific creative forces. Harris is design director at interior design and architecture studio futurespace in Sydney and counts the likes of Schiavello, Cult and Stylecraft among the many high-profile Aussie brands he has worked with to produce his wonderfully varied portfolio of innovative, characterful industrial design.

The accolades are a testament to Harris’ energetic persistence and dedication to his craft. Win or lose, he has always embraced design competitions for the impetus they give to produce and test the mettle of a self-initiated concept.

“If you don’t win, you learn something – but if you’re lucky enough to, it gives you conviction in your work, and the confidence to go forward,” Harris says.

Two significant wins came in 2010, with Harris’ Squiggle It winning Designer Rugs’ Evolve competition, as well as his Takushi table taking top honours in Cult’s Design Journey. Harris has since continued a fruitful association with both brands, leading to the development of exciting new products.

With a refined simplicity, the Takushi piece proved a popular one for Cult and is still in production, updated recently with re-engineered legs and frame. Harris has two projects currently in the works with the furniture house: one a new modular lounge system with clever custom attachments, and the other, a smart stand-alone table system with technological capability to suit the modern office.

“In an untethered, wireless workplace – how can our products truly support the way people work?” Harris asks. His Bulbo table box incorporates induction power, making its top a nifty hidden charge point. No longer bound by the tangled tyranny of cables, users are able to charge a range of devices simply by placing them on the surface. Designed with flexibility in mind, the shape of Bulbo gives users three height options depending on configuration of components.

Harris has just signed off on Mindscape, a new collection for Designer Rugs going into production for a launch late this year. With Mindscape, Harris challenges the conventional size and scale of rugs, playing with new forms, shapes and texture beyond simply high and low cut pile. The range mixes different yarns, combining the effects of loop along with cut, taking a product typically considered in two dimensions and bringing depth and grain to it.

“We use rugs in a lot of our fitouts. They’re unfortunately sometimes a bit of an afterthought in a space, but they can add so much character and identity,” Harris says. In a fitout for commercial real estate group Jones Lang Lasalle, for example, futurespace developed a rug that was a graphic representation of Sydney in plan view. “So not only did it look interesting but it also had a story to tell in the space,” Harris explains, JLL being a big player in the development of Sydney.

At futurespace, Harris oversees the optimisation of workplaces, drawing on expertise in activity-based working. So it follows that his designs are often borne out of identifying a need within a project, developing a product for a particular fitout and then reproducing it for a wider audience. Case in point, futurespace’s design of the REA Group headquarters features the Agile panels he developed for Schiavello – a portable, folding wall system with multifunctional zoning capacity to cater to REA Group’s neighbourhood-based working model.

For Harris, with so much on the go, the focus is on ensuring the standard of quality and integrity of his work across the industry. At this point in his longstanding career, “I’m better able to articulate what I’m trying to achieve,” he says. “You have to be mindful that you are maintaining separate relationships with different brands, so that this style belongs to this group, and this element stays over there.”

Though each project is unique, when viewed collectively, certain themes do emerge. Circles seem to be a common motif, for example, giving form to his Donut coat hooks, appearing in tables including Bulbo, and adding detail to his Zero door handles for Queensland-based Barben Agencies. Harris’ work transcends both the domestic and commercial spheres, and each is imbued with a particularly graphic, playful style that has become his signature.

“You don’t think of it while you’re working, but it’s natural – you gravitate toward certain approaches, you resolve things in certain ways specific to you,” Harris says. “But in the back of my head I think there’s a language there that can tie all my work together. That’s just part of a designer’s DNA.”