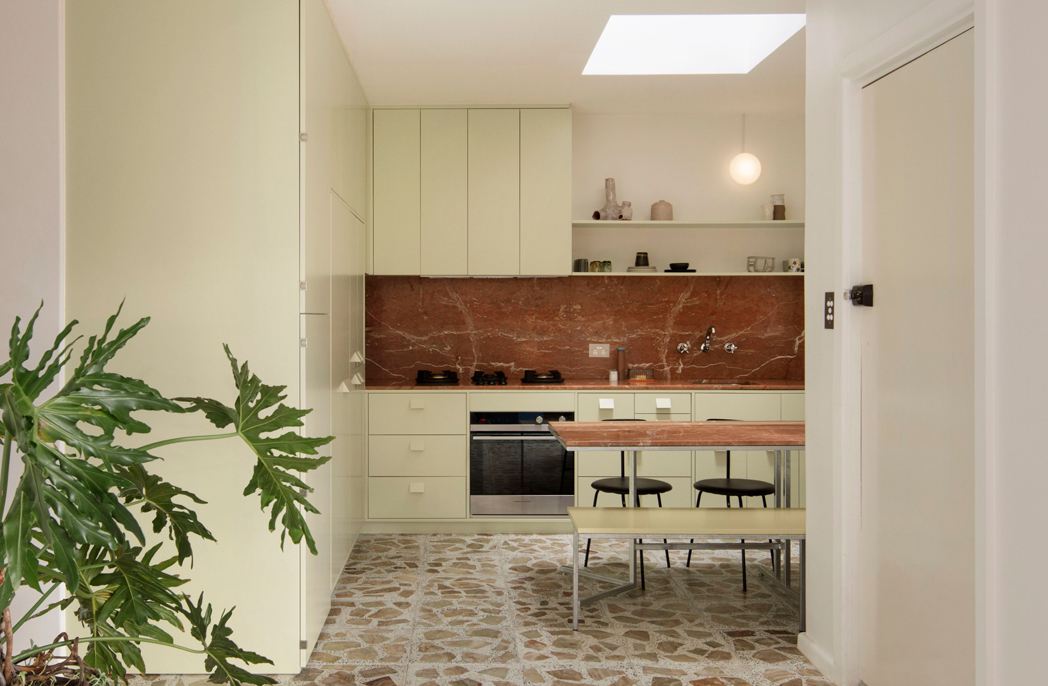 Faced with a space that was “too confined” and “disconnected” from the living room, Barker and Stewart reconfigured the layout of the kitchen in their 65-square metre two-bedroom apartment in a recent renovation.

“The layout was typical of many apartments of this typology, with a clear division between living and private spaces and with frontage on two sides.”

“The brief sought to celebrate the quality and atmosphere of the original home, while adapting to meet the current needs of the owner.”

Prior to renovation, the apartment had been empty for 20 years, but Barker says the “precedent of good design” and quality materials shone through the faded green carpets, soft pink walls and colourful vinyl floor tiles.

“Our design approach was to introduce a new architectural layer, which could build upon original elements, fixtures and details that we felt held value,” he says.

Linoleum flooring, carpets and walls were replaced and repainted, while the light from the original windows was amplified with the addition of a ceiling window.

“The void playfully reveals a glimpse of a previously hidden structural space and frames the every changing view of the sky,” adds Barker.

The new kitchen at the front of the house is L-shaped around a long custom red marble and steel-framed work bench that doubles as the dining table.

Banquette seating in a light yellow follows the lines of the table, further diving the kitchen and living area.

“The original interiors were quite bold and colourful, although there was a softness to the feeling of the rooms,” says Barker.

“For the renovation, we thought about strong colours that had warmth, but felt subtle at the same time and which would relate to each other as a distinct layer.”

The brown and grey tiled terrazzo flooring used throughout the apartment draws inspiration from the speckled original featured in the bathroom.

Located at the rear of the home between the two bedrooms, the bathroom features pink tiles and baby blue fixtures that are unique to Stewart and Barker’s apartment.

Salvaged from a larger project as excess stock, the new terrazzo tiles “unify the spaces” and pick up on the greens and pinks used in the kitchen.

Barker and Stewart chose a light green 2PAC cabinetry with visible framing around the doors and drawers and custom finger pulls for the kitchen. Sliding pocket doors conceal appliances, while the apartment’s original tapware was maintained.

The work bench, splashback and counter are made from Rosa Alicante marble, illuminated by a Ross Gardam wall sconce.

“Colour, material and form are brought together as a new layer to continue the story of the original apartment and bring joy to the daily life of the occupants.”

Murray Barker is a Melbourne-based architect focusing on residential architecture, including new build homes and alterations and additions.