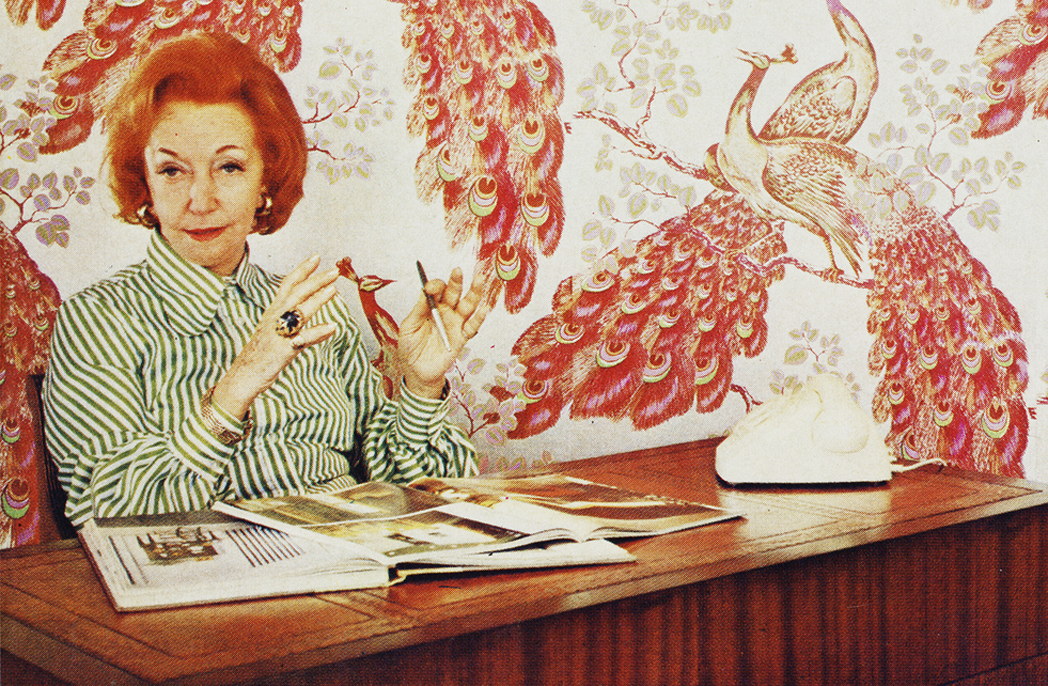 Much ado about Florence Broadhurst

Following recent news that NSW Police is launching a review into Broadhurst’s 1977 murder, Gillian Serisier delves into the world of the famous and infamous wallpaper designer.

Then there is the, ‘Can she really take credit for the designs when her eyesight was clearly shot?’ argument.

Oh, and she was horrifically murdered in her Paddington factory at the age of 78.

But what these sensational elements fail to sum up is a vibrant and strong business woman making it in a male dominated world.

Really, her fabrications of career, birthplace, training and acumen amount to little more than CV padding to suit what was needed to excel.

Indeed, a straight bio for this woman is redundant to explaining who she was. In short, a Queenslander who travelled as a singer and dancer through Asia, went to Europe, got married, got divorced, went to England, pretended to get married, had a child, set up a business as a Parisian couturier, came back to Australia, got pretend divorced, became a wallpaper designer.

The bottom line will always and most importantly be, that her designs remain exceptional.

The main game then is this amazing personality, a woman who at 60 started a wallpaper business. That, and the fact that there just happened to be a small failing business in her back lot. John Laing was an artist making wallpaper that no one wanted. Broadhurst was a woman who knew what was coming globally and ran with it.

A lot has been made about Broadhurst not knowing how silk screens worked when she started. This should be greeted with a resounding, ‘So what?’.

What she did know was how to put colours together, how to see what was coming in terms of trends and how to find influences ahead of the game – in today’s parlance – she knew how to read the zeitgeist.

She also knew who to employ to get the most traction socially as well as who would work the hardest, longest and be the most artistically able to follow her instructions.

Fitzpatrick worked out how to make the background dots work to create continuity between the wallpaper panels – no mean feat given that she wasn’t working with anyone who had made screen-printed wallpaper before!

Fitzgerald was also on board for Broadhurst’s theatricality and complicit in letting interior designers think it was all Broadhurst’s work by switching places with Broadhurst on their arrival.

“The effect was great. She impressed the decorator and they would then walk off to the end of the showroom,” Fitzgerald once famously said.

What is clear is her eye was across everything and, despite her failing sight, she would look at each design under a light box and clearly know what worked and what didn’t

She was also ahead of the times in terms of customising work with specific designs, which she created and extrapolated to suit (and entice) key designers – something that is now de rigueur to any product designer.

Granted, her designs have moved in and out of fashion, and she would perhaps be the first to throw up her arms and say, ‘Do something new’, all the while milking it for everything she could.

But Signature Design Archive – the owners of the Florence Broadhurst brand – have a plan – marketing it with a sustainable ethos.

The result is a brand that has emerged in the last 10 years with a clear understanding of how to work with interior designers.

The patterns are curated for slow release with no pattern flooding the market at any given moment.

Others still are a complete surprise. Crocodile and Cats, classically nuanced on the one hand and out right playful on the other, are two that are not readily known.

Given that she claimed 800 designs, with a reality of about 530, there are many more to be re-released, continuing the Broadhurst legacy.

Contemporary designers are reaping the benefits of this legacy with a range that traverses the elegant tonal shifts of Chinese Key to the outlandish cacophonies of Swedish Stripe.

Favourites though, will always remain favourites with The Cranes continuing to impress in the recent Raffles Hotel Singapore’s Yi Restaurant for Chef Jereme Leung.

For this project, design firm Aedas Interiors approached Materialised for a custom wall covering using The Cranes fabric to deliver a coherent narrative of nature.

“I love the vintage look, but we wanted it to have a more modern feel,” says Viñas.

“The black and white colouration we used gives it a fresh, updated look.

“I’ve always been a huge fan and admirer of Florence Broadhurst. I was immediately smitten.”

And, what could be more appropriate than a wholly fictitious private club when it comes to Florence Broadhurst?