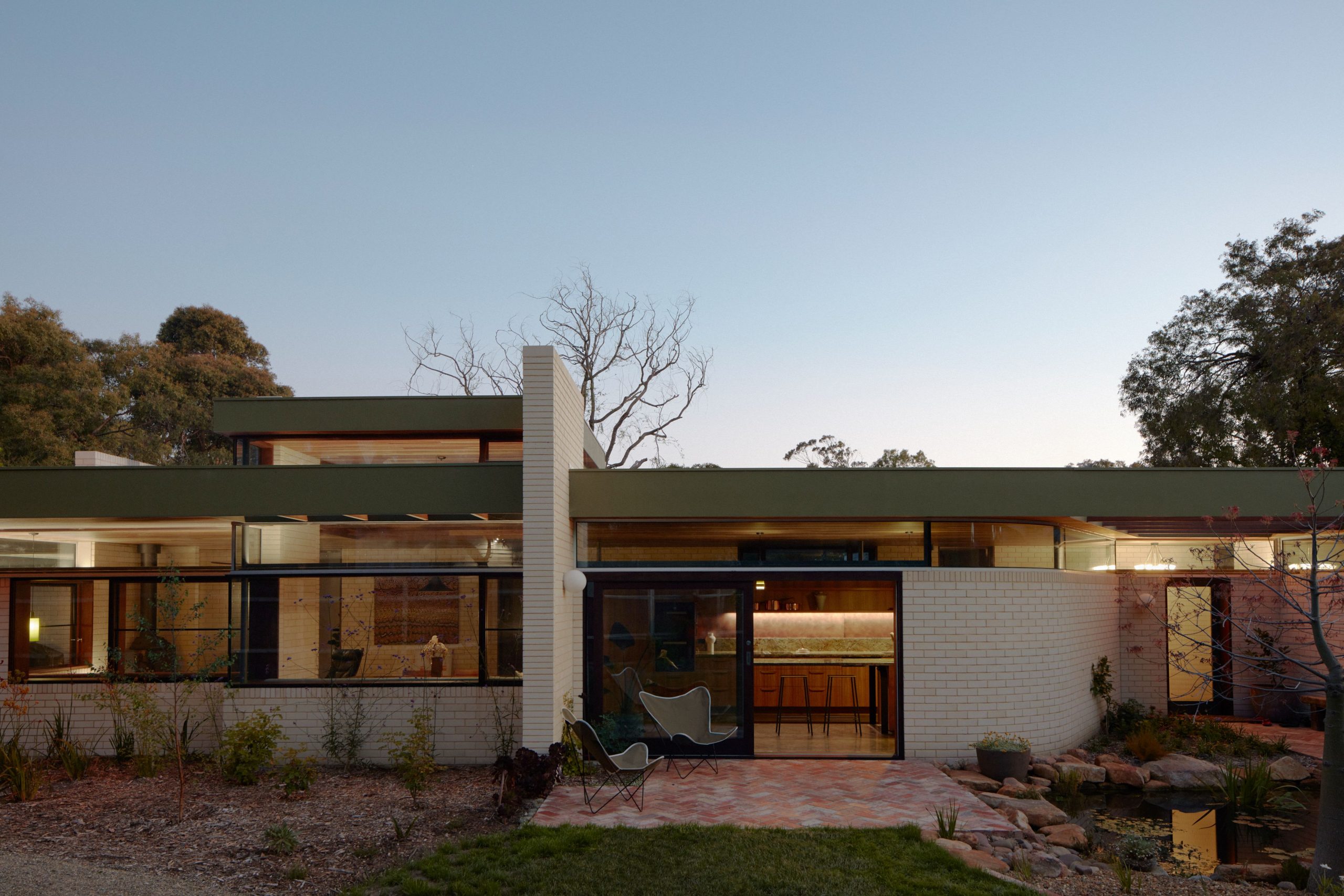 With a feeling of lightness and stillness, Florida house from Nest Architects and Placement is anything but an empty nest for a semi-retired couple living in coastal Victoria.

Haven is the first word that comes to mind when you stumble across Florida house. Seeking sanctuary in a seaside suburb two and a half hours from Melbourne, the white brick bungalow feels like a taste of something long past. It suggests a memory from childhood or days spent without care indoors when there wasn’t a statewide mandate to do so…

In many ways, this isn’t a coincidence. Nor is it a case of an overly effusive writer assigning human attributes to a mass of bricks and timber. It is very much a deliberate design decision made by Nest Architects and Placement.

“It sounds stupid and simple, but corners are really important in a house, which is why I don’t understand why we keep trying to build homes without them,” explains Nest Architects director Emilio Fuscaldo.

“We generally have all grown up in houses with corners and windowsills and built-in joinery – spaces you can really nestle into and make yourself feel comfortable.

“So when you look at our projects, which have corners accentuated with joinery and windowsills everywhere, you’re reminded of where you grew up, and think, ‘That looks really nice and familiar’, as opposed to feeling stark or minimal.”

That isn’t to say Florida house is compact and cosy. In fact, it’s the opposite.

Home to a couple transitioning into early retirement, and their three adult children, it stretches more than 200 square metres, but has been designed to be locked off into smaller spaces for myriad future uses.

“On the right hand side, you’ve got the main house with the dining areas and bedrooms,” says Fuscaldo.

“All the kids are nesting at home at the moment, but that won’t be forever. So on the left side, we’ve created a separate sanctuary that could potentially be closed off completely for a future Airbnb.

“Between them is an entry courtyard that gives some separation to the two spaces, but also acts as a mechanism to break up what is a big and long house.”

This optical illusion very much comes into play outside the home too, where the bright white bricks – its most striking feature – support a low horizontal ceiling highlighted by a forest-green fascia.

Thoughts immediately turn to the mid-century, something that Placement director and ex-Nest architect Stephanie Kitingan acknowledges, but is quick to play down.

“There is no denying the clients were inspired by mid- century homes, this was evident in the concept, but at Nest, we design spaces for people. Florida house definitely references the modernist era in terms of materials and how it sits in the landscape, but it also feels pretty timeless.”

The blades and curves that define Florida house’s façade seek to separate its roof from its walls, making the whole project feel as though it’s floating.

Since the house itself is quite large, but the block is not, these features also serve to break down the bulk of the exterior, while also nestling the home into its luscious garden, designed by Akas Landscape Architecture with direction from the horticulturally inclined clients.

“They were quite porous and, during construction, we had to get a new shipment in, and it was a whole different story. But when paired with the fascia (a last minute colour choice by the client), they make for what is
an undeniably striking house balanced within the garden as opposed to dominating it.”

These white bricks snake their way into Florida house’s interiors, through the entrance courtyard and into the light- filled living spaces.

“Having bricks on the inside corresponds to the way we like to design, whereby the material speaks for itself,” says Fuscaldo. “It doesn’t have to have added layers. Why should you build something only to internally skin it with something else? Florida house is quite honest in that it’s built with bricks inside and outside, and the white fills the interiors with a crispness and an openness, which I really like.”

For contrast, Nest Architects and Placement chose polished concrete floors and one type of timber, although you’d be forgiven for thinking they’d used more.

“There is a real variance in the timber tones, especially on the ceiling, where lots of reds and browns interplay in a really funky way, but it’s all spotted gum,” explains Kitingan.

“There’s just a difference between the veneer and lining boards. So the ceiling is lining boards, which is milled straight out of the tree for a greater level of variation. Whereas with the veneer, you can control the colour a bit more,” adds Fuscaldo.

“The clients wanted something Australian, and Tasmanian oak had been done and dusted. We felt like spotted gum was more dynamic and really interesting, without being too slick or too polished.”

In the kitchen, custom cabinetry provides a background to countertops in large slabs of forest-green marble. Custom built-in pieces fill Florida house. They’re at the heart of what makes the project so warm and intimate. Large, airy rooms that would otherwise feel too big are lined by window seats and banquettes, study nooks curve around corners and expansive wardrobes have finely-carved handles. Even a sunken bath in a sea of blue and green tiles goes from sterile to spa-like with an expansive spotted gum and granite sink.

“When you build in the joinery, you can limit the size of the rooms. You don’t have to move chairs around. You can create little nooks and courtyards and breakout spaces, and it’s probably cheaper than buying a $20,000 couch,” says Fuscaldo.

“It also creates spaces where you feel like you can hide away,” adds Kitingan.

“Warmth is a big thing when creating a home. So places that feel like they should be intimate – like the living room – should be intimate. You should want to nestle in them. And then in larger spaces, you should feel like you can open up. That’s the dining area with its extending table and vintage pendant lights [from Radar in Fitzroy].

“All those things add to the feeling of intimacy in the home, which, in turn, makes it homely.”

Nest Architects was founded in 2006 by Fuscaldo. The practice reflects his personal beliefs in collaboration, environmental sustainability and inclusive design.

Kitingan worked at Nest Architects before branching off to start Placement in Melbourne in 2020. This is the duo’s first collaboration.

In 2018, Nest Architects blurred old and new in this Edwardian home.