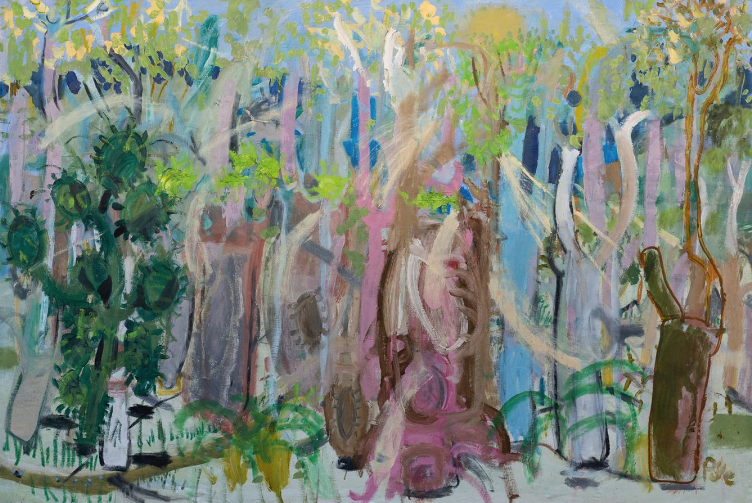 Presented by Melbourne-based design store, Modern Times, Magma : Gamma is an exhibition of original paintings by Andy Pye and captures the essence of the raw bushland and rock forms of the southern Grampians in south-west Victoria with an “effervescent optimism”.

Australian painter Andy Pye has exhibited widely in a number of Victorian galleries and his works are held in private and corporate collections in Australia, the US, Canada, France and the UK.

Working out of his bush studio near Eldorado in northern Victoria, Pye paints en plein air, capturing the native bushland.

Heightened and respectful, these images also highlight the spiritualism of the area, central to the creation stories of the Jadawadjali and Djab Wurrung people who have had an association with the area traditionally known as Gariwerd for more than 30,000 years.

“I see the world of art showing us how long. The ever-sceptical postmodern movement has mutated (as predicted) into out-and-out nihilism and darkness,” explains Pye on his artistic approach.

“Our trees and this land is speaking. Mid-Century modernist Art in Victoria didn’t begin the story – but it took it to a public place in a loving way. It wasn’t Von Guerard who showed us how magnificent the landscapes are, it was Vassilieff, Namatjira, Tucker, Boyd et al. Sometimes crew are like ‘dudes trying to copy Boyd’. You’re joking? If I don’t pay homage to their brushstroke and technique, who will? Not the postmodernists.”

Alongside the exhibition, Pye will also host an artist talk and live painting event on Saturday 13 August, where he will discuss the life, sound, movement and solitary landscape of the Australian bush.