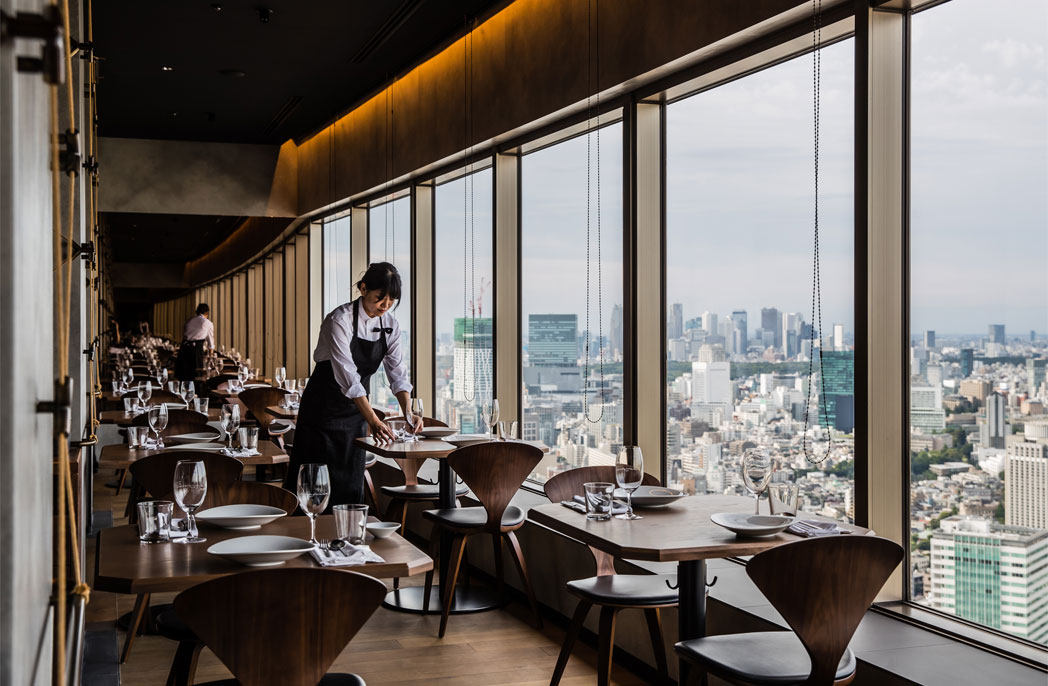 Luchetti Krelle this week delivered Longrain Tokyo, a warm and earthy interior on the 39th floor of a skyscraper in Ebisu, Tokyo.

Floating high above the skyline, with a panoramic city view below, the layout gives subtle nods to its founding Surry Hills warehouse, while also paying respect to Japanese symbols and craftsmanship.

To discuss how their final design fuses cool mid century classics, with references to its brother, and sister venues, we caught up with principal designer Stuart Krelle over a coffee.

As we quickly discover, the job of transporting an iconic modern Thai restaurant to Tokyo, was not without its challenges. The 160-seater required a sensitive touch to blend Australian casual dining and refined Thai cuisine, into a glamorous Tokyo locale.

Ebisu is a district popular with young people for food and wine culture and the top two floors of Yebisu Garden Place represent a premium destination with spectacular views.

“We wanted the restaurant to have its own identity, but we also wanted to give subtle nods to the two other venues,” says Stuart.

“For instance we loved the green fish scale tiles and heritage red brick at Longrain Chinatown on Little Bourke Street Melbourne and the ceiling joists and beams in the Surry Hills warehouse in Sydney.”

But because the site chosen was not a heritage warehouse, or a converted factory, Luchetti Krelle had to import the founding concepts from its homeland restaurants, in creative ways.

“We have used a subtle ‘X’ symbol through the Longrain Ebisu venue to reference the Australian warehouse framework, but also to represent an intersection of cultures; Australian, Japanese and Thai,” says Stuart.

“They help to soften the other materials like brick, steel and concrete. They add some femininity, together, with the use of marble and aged brass,” Stuart says.

The other major design feature is a bespoke light feature over the bar, which Stuart Krelle designed to anchor the bar at the entrance and provide a sense of wonderment and occasion.

“The light is representative of Thai rain chains that provide a soothing shift of water. Mixed with a mid century influence and inspiration from the interchangeable modular candelabra by Fritz Nagel,” Stuart says.

The other lighting is by French minimalist Serge Mouille, which is an element taken directly from Longrain Sydney.

Longrain Melbourne is present too. As you move around the venue you find the distinctive round wooden table with inlaid marble lazy Susan’s, a red brick feature wall behind the bar as well as pops of green wool and earthy ochre red flooring. While it might not be obvious to those who’ve never visited Longrain in Australia, these vignettes will be a welcome reminder to foodie tourists visiting from Australia.

“The Longrain design vernacular is definitely here,” says Longrain founder and restaurateur Sam Christie. “But Ebisu has its own style and it really reflects the exact, precision of our Japanese partners. Just their attention to detail which is always impressive.”

Lead image by Nikki To.

Take a look at a hospitality closer to home by Luchetti Krelle – Bar Brosé in Darlinghurst.