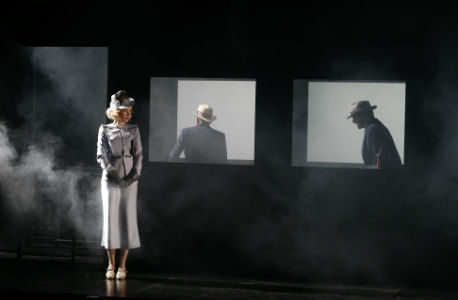 Image above, Double Indemnity. All photography by Jeff Busby. Written by Jan Henderson.

The Melbourne Theatre Company (MTC), established in 1953, has organically grown into an indomitable force within the world of Australian theatre and is a fine example of talent, expertise and community. Over the years the company has presented many memorable plays with outstanding actors, exceptional productions and precision delivery; however, with the advent of two new productions, Skylight and Double Indemnity, the complementing force of the set design of both plays enhances the words of the writers and the performances of the actors, and takes a visual centre stage that satisfies the creative in us all. 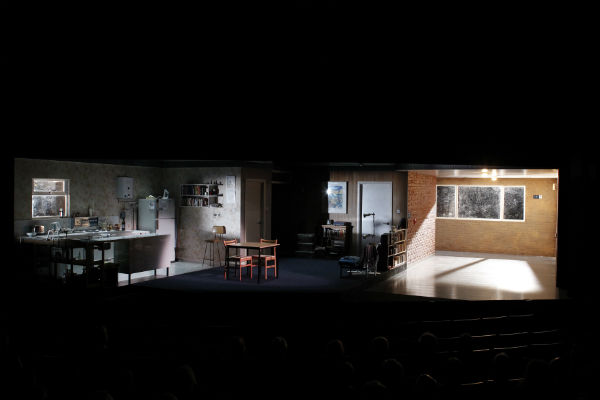 As the curtain opens on Double Indemnity the set design is both powerful in its simplicity and subtle enough to remain a backdrop to the single actor on stage. Andrew Bailey, production design coordinator at the MTC and set designer for this adaptation has created an integral visual experience to accompany the words of James M Cain’s 1943 novel (adapted for this production by Tom Holloway). Bailey was trained at the National Institute of Dramatic Art (NIDA) and studied arts production majoring in design. Graduating in 2004 he was involved with small independent theatre productions and fringe shows, then finally moved to the MTC in 2008. His portfolio of productions is extensive and his masterful interpretation of Double Indemnity has reaped many accolades. Double Indemnity is a powerful story of love, lust and power.

The fast-paced tale is set in the US during the Depression and the characters are flawed and deep, hungry for money and looking for love. This is a plot full of intrigue, with twists and turns at every juncture, and so Bailey has constructed a set that rotates and shifts with the brisk pace of the dialogue. The set is curved, a large rotunda set in the middle of the stage that supports the different rooms required. Characters move as the set moves, walking through doorways, always on their way to some- where. Light and shadow is sculpted to convey the good and the bad of the characters and their situations, and smoke is utilised to evoke an atmosphere of gloom and desperation. Bailey’s use of colour is masterful – there is very little. The set is light brown, the few furniture pieces, a desk, chair, sofa or armchair are black or brown, the costumes are subdued. Save for the occasional slash of red lipstick or white ensemble on the female lead, the colour continuity of the set is the perfect foil to the action on stage. When the scene requires, Bailey has created minimal sets and props that totally transport the viewer. With this set design, it is what’s not seen that makes the visual real, so a stark black stage with a lit car window takes us on a road trip with the characters, or a simple rail with posts transports us to the deck of a boat on the high seas. Bailey admits that with theatre design he is “much more drawn to creating an abstract shape that allows the audience to fill in the blanks” and this production is a fine example of this.

“There is an extraordinary generosity through the entire MTC team, with all of us working towards one end, that when the curtain goes up on opening night, what is on stage has aspired to excellence in every area, and that we have done everything possible to create a great work of art.” -Brett Sheehy AO, Artistic Director, Melbourne Theatre Company

As spare as the set design is for Double Indemnity the opposite is true of Skylight. The set for Skylight is static, fixed throughout the play. Every- thing that is required is on stage and in place and it is the use of the set by the actors that defines the characters and complements their words. Dale Fergu- son is the set designer for Skylight and his understanding of the characters is evident in the design that literally fills the stage at the Sumner Theatre in the Southbank arts precinct. Ferguson graduated from NIDA in 1989 and immediately joined the Queensland Theatre Company as resident set designer where he remained for five years. In 1995 he moved to Melbourne and the MTC for three years leaving to freelance in 1998. Throughout his career Ferguson has leaned towards drama and opera and in the last few years his style has shifted towards the very detailed and ultra realistic. With the design of the Skylight set his predilections are evident. He says, “With detail, I try to become another character in the play and therefore try to approach the design the same way as an actor would interrogate a role, give a back story.” David Hare’s Skylight is a play crafted around three characters and their experience of love and loss on one level and ideology on another. Kyra, the female lead, is a complex character living in an apartment block with little comfort, reunited with her ex-lover and confronted by their past through the eyes of the present. With such a circuitous story Ferguson designed the set as large as the storyline itself. His vision is realised in a 12-metre high structure of an apartment block spread over five lev- els. Kyra’s ground floor flat is shown as an interior while the apartments above are presented through their exterior with the apartment’s lobby to the side. As Ferguson states, “This play can work in the smallest theatre possible, but MTC programed it in a large theatrical space… the challenge was to still make the play feel small and intimate, almost claustrophobic, and touch on the environment and people who live around [Kyra] and the economic situation she has chosen to exist in.”

We see Kyra’s small featureless kitchen, a single bar heater for warmth and the lacklustre décor. In one scene she makes a spaghetti dinner, turns on the tap and the water pours into the saucepan (is this theatre or real life?). The kettle is used often in the making of interminable cups of tea. The set is Kyra, once comfortable, now down-at- heel and everything is ‘make do’. 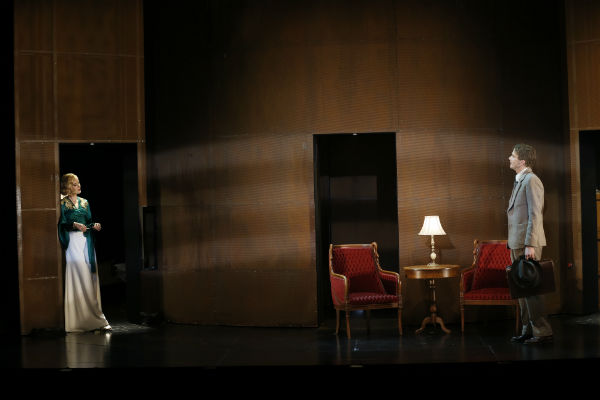 Ferguson has layered the set with objects that help build the character beyond the words. His interest in architectural set design is obvious and he displays the set the way he wants the audience to see the play, commenting, “I don’t believe any seat in the theatre will have the same experience as the seat next to it or anywhere else. I share different views with different angles and this creates dynamic, architectural lines, but not everybody is seeing the same things. So I’m sharing points of view… where everything can reveal itself slowly.”

Two plays, two very different experiences, one highly stylised, the other ultra realistic, but each with outstanding set design that inspires the imagination beyond the words and, simply put, ‘creates theatre’.

The architecture of dance