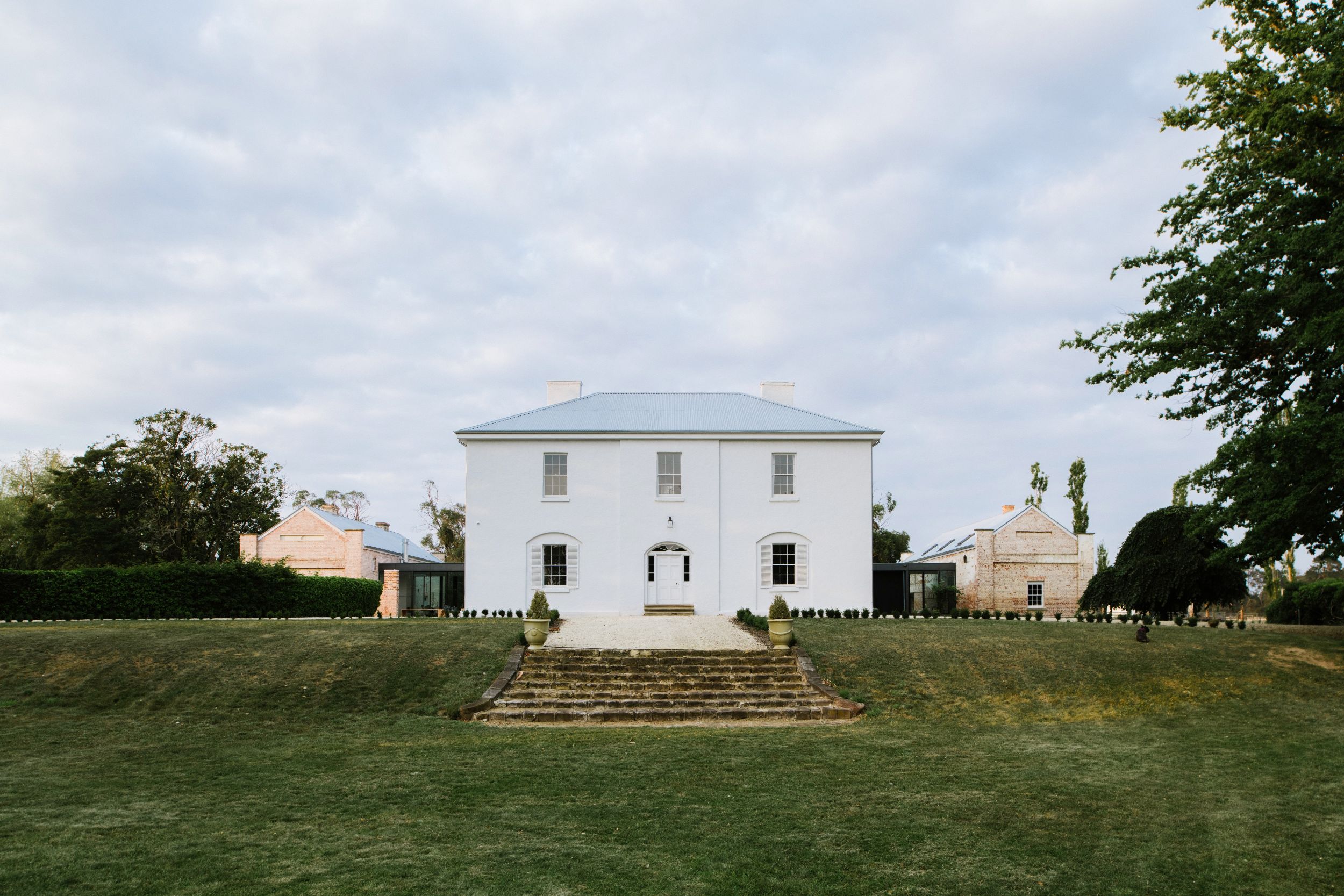 Georgian mansion houses have been part of the Tasmanian landscape for the last 200 years, often standing, sentry-like, overlooking land adapted for livestock and cropping.

Their cliff-like walls, small paned windows and narrow eves lend them a clean geometry that gives away little of the life inside.

It is no small feat to take on one of these properties, as this kind of project brings with it robust negotiations with Heritage authorities and a tremendous requirement for restoration.

When the owners of Symmons Plains homestead, Jane and Stephen, briefed Cumulus Studio director Todd Henderson, they described their desire for “a significant renovation for a significant Tasmanian home”.

The resulting work finds a balance between decisions made for the property in itself and those made to accommodate the lifestyle of this family of seven.

John Arndell Youl built Symmons Plains homestead in the 1830s, on a land grant obtained by his father in 1819.

Incredibly, the property stayed in the Youl family until 2011, when it was sold to the clients for this project. Jane and Stephen were very keen to find the right architectural match for them on such an important project. Stephen farms the remainder of the estate for a large global conglomerate and Jane had a great interest in design and interiors. She wanted to remain very involved in the process throughout.

So Henderson’s pragmatic, hands-on approach to making architecture appealed to Stephen, and his enjoyment of collaborating with clients and builders on design was the right match for Jane.

The first building on the site, which accommodated the original kitchen, was a small, two-storey gable roofed building, which was ultimately surrounded by the mansion house and flanked by two symmetrically placed outbuildings – the granary to the east and the stables to the west.

At some point in the design discussions, Stephen declared that he wanted to link all of the buildings together.

He also wanted to ensure that the main Georgian building was still the heart of the home and used daily. And, in terms of a lifestyle brief, the family of seven, who farm and fish and ride horses or dirt bikes, needed a robust home that would take the knocks. It needed to have the flexibility to be both grounded and grand, and accommodate the family as it grew and changed.

In response, Cumulus Studio proposed a new piece of building, running across the back of the main house, connecting it to each of the outbuildings.

This element is intentionally contemporary, sliding in under the eave of a lean-to at the rear of the main house, keeping its profile low against the Heritage façades and providing a way to mediate a number of different floor levels of the different buildings.

It faces the south, but captures northern sun between the main house and the outbuildings. While much of the Heritage fabric remains unchanged due to the constraints of the listing, this new piece of building can be elastic to interpolate between the buildings. New, more heavily serviced spaces, like the kitchen, are accommodated here with ease.

Importantly, the linking building also forms an open edge to the outdoor spaces held within the ‘arms’ of the outbuildings, transforming them from simple yards into more formal courts.

Programmatically, all of the main rooms needed for retreat, warmth or enclosure – office, bedrooms, television room and formal dining room – are located within the Georgian house.

The main spaces for socialising and connecting with outdoor rooms, on the other hand, are found within the new piece of building.

The granary provides two semi-self contained accommodation spaces for visiting family, the stables hold a rumpus room and the garage, and the original kitchen has become a flexible gallery space, its second floor almost entirely removed and the roof structure revealed.

Essential service spaces, like a mudroom, have been included in the new work to support the family’s lifestyle.

While the approach to the interiors of the Georgian house was quite simple, with much of the work being new paint finishes and window coverings, there was more scope to explore ideas of materiality within the linking building and the granary.

Jane had a desire to have steel framed windows in the new work, so Henderson designed a custom glazing system, which was fabricated locally.

The regularly spaced mullions on the floor-to-ceiling glazing create a rhythm across the façades of the new work that sits comfortably against the symmetrical Heritage buildings while remaining clearly contemporary. Steel was also used for trims and architraves in the renovation, to distinguish new work.

Keying in with the scale and colour of the glazing, a series of large pivot doors divide spaces within the linking building. Exploring an interest of Jane’s, the doors are finished using the Japanese shou sugi ban technique, which local furniture designer Simon Ancher taught Jane and the joinery contractor.

A few of Ancher’s pieces have been selected for the renovation, including a blackwood coffee table and his Stillwater bench, featuring the same finishing technique.

In the granary, the texture of the original brick walls has become a significant part of the aesthetic. Cleaned back of any loose paint, the brick patterning and variation from face brick to partially-painted provides a lively backdrop.

Steel again plays a role in these rooms, in particular the partially suspended steel stair, which is composed of a series of folded and flat plate fins, finished in matt black.

Another feature is the upper level floor. Salvaged and completely reconstructed, the 300-millimetre wide, pit-sawn boards now have a new lease of life.

What will not be as obvious from the photos or drawings is the amount of care and repair that happened throughout the process of renovating the estate. Rising damp was attended to, unsympathetic work removed, solid walls reinstated and whole buildings re-roofed.

As Jane emphatically explains, “We replaced every window,” each piece made to suit its Heritage surround, such as small square panes in the Georgina work.

Sadly, Heritage buildings are often placed in the ‘too-hard’ basket and are sometimes left to fall into ruin as a result.

In this case, however, the intentions of the clients and the architectural strategy to link all of the buildings have brought life to the whole complex of buildings, accommodating contemporary ways of living and, in doing so, preparing Symmons Plains to weather the next half century or more.

Led by Led by Kylee Scott, Todd Henderson, Peter Walker and Keith Westbrook, Cumulus Studio is based out of Tasmania. The practice is recently behind the boutique hotel Stillwater Seven. It also designed the Arts Centre Melbourne’s café, Centro.