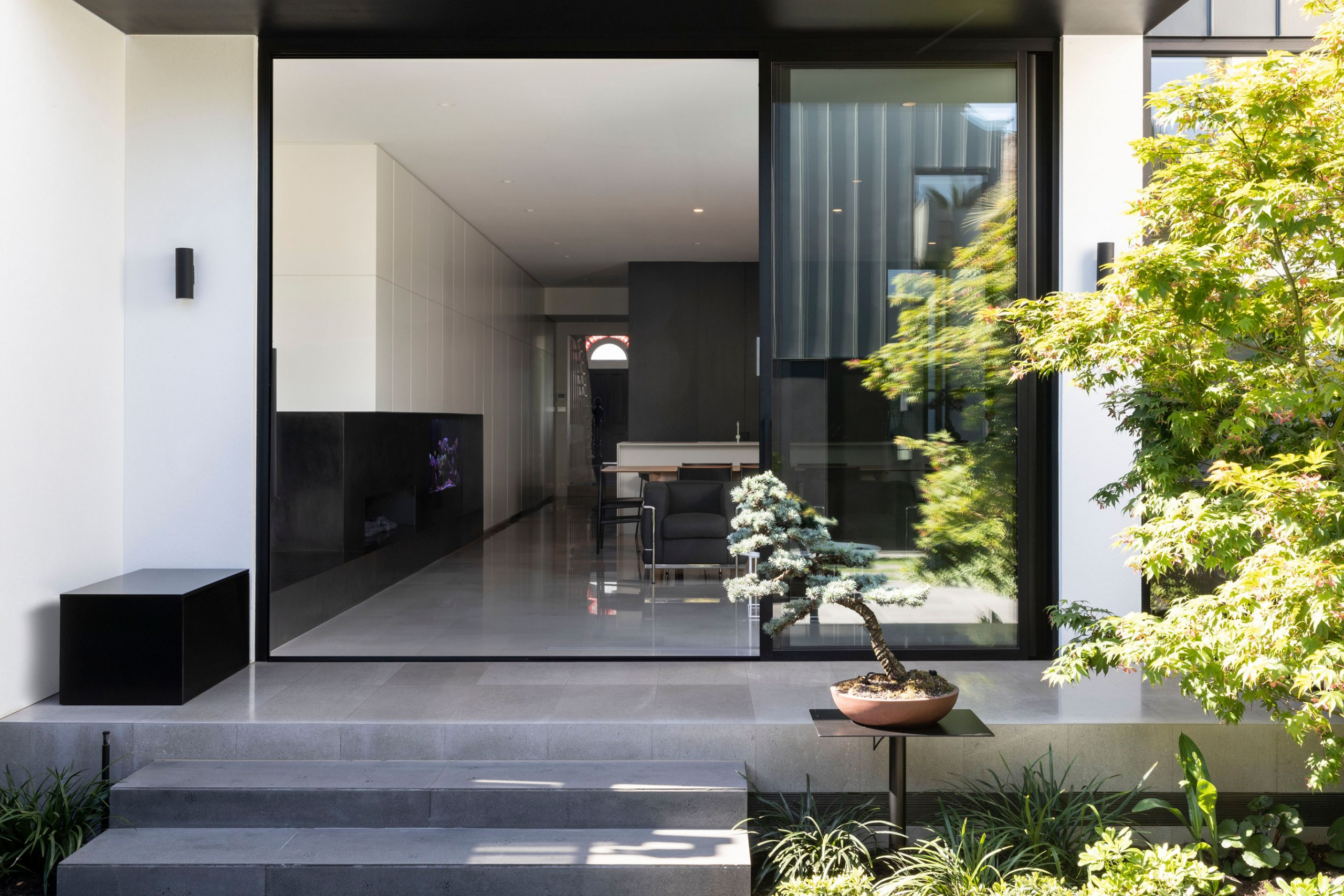 A chance encounter in an airport bookstore led this family to entrust the revitalisation of their Melbourne Heritage home to Sue Carr and her design team.

On a work assignment in Chiba, Japan, Shaun Rust once stood awestruck at the sight of Vessel, an oversized geometric public sculpture by Melbourne artist Robert Owen.

“The sculpture just spoke to me – the colour, the blue he uses, the serenity around it, the form, its geometry. I was captivated,” he says.

Rust and his partner Michael couldn’t have predicted that, four years later, a similar piece of Owen’s work would be designed for the entrance of their East Melbourne home.

Such was the serendipitous and sense-led journey of revitalising their Heritage home, with Carr at the helm.

“The inspiration for this home was centred on what I saw in Japan. The tranquillity, calmness, centred way of living, harmony of living with the natural world,” he explains.

Eastern philosophies flow through the project, in process and form. Even the connection with Carr seemed manifest.

Killing time at the airport en route back to Melbourne, Rust chanced across a book of architects’ homes and opened it to an image of Carr’s principal architect, Sue Carr.

“There was Sue sitting in her home, and the instant I saw the palette, the clean lines, the serenity and its beautiful cherry blossom tree in the centre of the house, I thought something special was going on,” he says.

Ultimately, it was the firm’s commitment to minimalist, functional beauty that won Rust over. That, and the presence of a Robert Owen sculpture hanging in Carr’s office – yet another image of providence in a project that seemed fated to be.

Values of scale, respect for Heritage and contemporaneity drove the project. The modern home, set within an historic 19th century Heritage-listed Victorian terrace house, encompasses three key zones: the original terrace dwelling, a central courtyard and a contemporary studio addition at the rear of the property.

“Central to the design is to achieve the ‘feel of the space’: the play of light, reflection, neutral materiality, the control of contrasts and integration of landscape,” explains Sue Carr.

The original terrace, designed by prolific Melbourne architect William Pitt, who also designed Melbourne’s Princess Theatre, has been completely transformed to a contemporary home for a family of four.

The strict Heritage overlay proved one of the most challenging aspects of this project, but ultimately added layers of interest and legacy, engendering an integration of Heritage and contemporary design.

Honouring the original Pitt design, Carr utilised the high ceilings and northern aspect of the terrace, orchestrating movement between old and new that leads from the arched terrace frontage to the zinc-clad dwelling at the rear.

“Working with the existing, yet obscured, ornamentation of the building, beautiful details have been revealed such as cornicing, arched doorways and even an original window frame on the southern façade,” says Carr. “These all play against the incredibly modern insertions.”

Interiors of the old terrace were reconfigured to overcome dark and inefficient layouts. The front rooms, previously closed-in and uninviting, have been transformed into a light-filled dining space, music room and study.

The couple wanted to utilise natural materials such as stone and wood, but the brief was not only aesthetic – the house needed to function as a family home. “The home is moulded to the ways we live and things we like to do,” Rust says.

The couple’s nine-year-old twin girls love to play the piano and violin in the front room, beside the two bespoke sculptures created by Owen to represent the daughters.

These two marine blue geometric fixtures were designed around the twins’ exact time and place of birth. The geometric design takes its shape from the star formations over San Diego where they were born through surrogacy.

Michael, an eye surgeon, finds respite from his high-pressure days with his bonsai collection in the bluestone courtyard, and custom-built fish tank that extends into a sub-tank and filtering system under the house.

Elements of fire and metal were incorporated through retaining the three traditional fireplaces and adding a custom steel fireplace in the living area, complementing the cast iron around the fish tank.

Bold monochrome framings run across spaces, providing linearity and directionality. The foyer space incorporates a metal, architectural insertion of ‘black box’ scullery, around which the kitchen and dining area have been hung, and a storage wall runs the length of the main living space for clutter-free living.

Rust explains the pared-back interiors have encouraged a monthly process of reductionism. Even the kids are inspired to pack away their mess. He admits the family’s colourful collection of artwork has been in storage since the remodel.

“We hung none of it; the house just doesn’t need it. The art, for us, is the limestone, the bluestone, the cladding, it’s the Ginkgo trees, and the fish tank.”

Materiality, space and light were used to open the interiors and showcase views oriented to the outdoors. Reflected light from the pond at the entrance dances across the front room. From the living area, the courtyard and studio are framed as if a picture.

The courtyard acts as a transition space between the main house and studio accommodation – one built into its historic frame, and the other wholly contemporary.

“We were not concerned of casting a stark juxtaposition against the main Heritage house,” says Carr. “The new building draws influence from other studio pavilions in the laneway, the zinc-cladding revitalising the existing design language.”

The project was completed in late 2019, having taken almost three years, including the build and interiors, all of which were managed by Carr. The couple were hands-on, and Carr was meticulous. To ensure the faultlessly clear limestone ground floor, each tile was individually photographed in an Italian quarry and reviewed before shipping.

Both parties explain a sense of trust and shared vision that enhanced the project.

“The power of this project for me was the collaboration,” Rust says. “I felt that we had a united vision, and it just flowed.”

Carr is an architecture and interior design studio based in Melbourne. The studio recently designed a hibachi grill restaurant that takes visitors from the streets of Richmond and into a cool and calm Japanese haven and brought the vineyard to the boardroom for Treasury Wines.