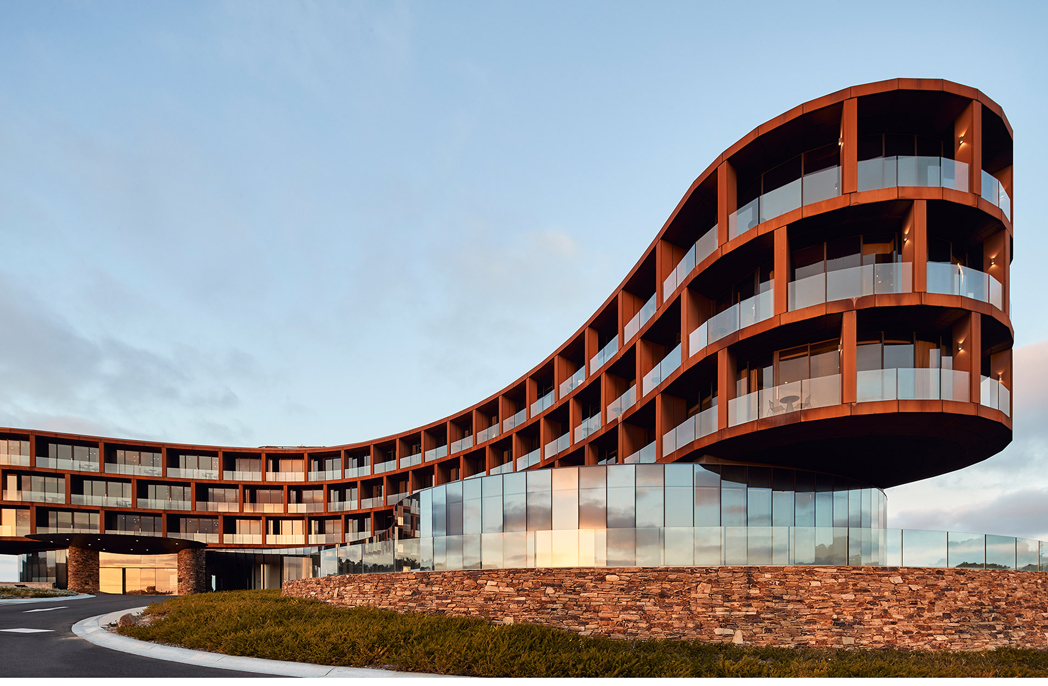 Wood Marsh drew from the “corrosive nature” of the Victorian coastline to inform the “sculptural geometry” and material selection of its RACV Cape Schanck Resort.

Located in a “natural saddle” adjacent to the Bass Strait, the 120-room hotel, day spa and golf course/club was “carefully positioned” in the coastal landscape.

“The soft, rolling dune-like quality of the topography called for an architecture that was fluid and sculptural,” explains the Melbourne practice.

“A robust architectural outcome, the resort celebrates the untamed nature of its site.”

Set directly behind the existing club facility, which will be replaced with a north-facing garden and recreation area, the upper portion of the resort “reaches across” with three seven-metre cantilevers.

“The geometry itself plays with perspective,” says Wood Marsh of the cantilevers.

“It extends to form a three-lobed figure reaching north from Port Phillip Bay to the Bass Strait in the south, with the full scale of the building never revealed.”

Respectful of neighbours, the resort’s parking, back-of-house services and golf pro shop were partially buried in two basement levels, while steps were taken to ensure the new structure didn’t disturb the local flora and fauna, which include the white-footed dunnart (a marsupial), the leafy greenhood orchid and rare coastal moonah tree woodlands.

Completing the resort is a two-storey steel and concrete building that houses the spa, yoga room and health club on one floor and the reception, conference and dining spaces on the other.

This sits on a locally sourced stone plinth, which “anchors” the building to the land and is symbolic of the project’s focus on craftsmanship.

“Together, the resort evokes the imagery of an object that has been slowly revealed by natural erosion,” says Wood Marsh.

“The building has a constantly shifting profile as it is viewed from various points around the surrounding site.”

Seeking a “visual break”, architects designed a glazed podium directly above the plinth.

Set back with a large protective overhang, the podium draws panoramic views into the conference rooms, restaurant, lounges and hotel, while also contrasting the “sweeping weathering steel arcs” of the project’s exterior.

Inside, the hotel rooms are informed by a “concertina of Corten sections” that will be enhanced as they “shift and adjust their colour” over time.

Grey Italian marble, blackened steel and terrazzo are paired with warm timber-slat walls, while a splash of gold leaf above a blackened-steel stair leads down to the spa level.

“The materiality of the building has been chosen specifically for its ability to age gracefully over time,” concludes Wood Marsh.

“Sophisticated not blingy”, the materials palette was, in part, also inspired by a Hermes handbag.

Established by Wood and Randal Marsh in 1983, Wood Marsh is a Melbourne-based architecture practice. It also took inspiration from the “corrosive nature of Victoria’s sandstone coastline” recently for this surf lifesaving club in Ocean Grove.