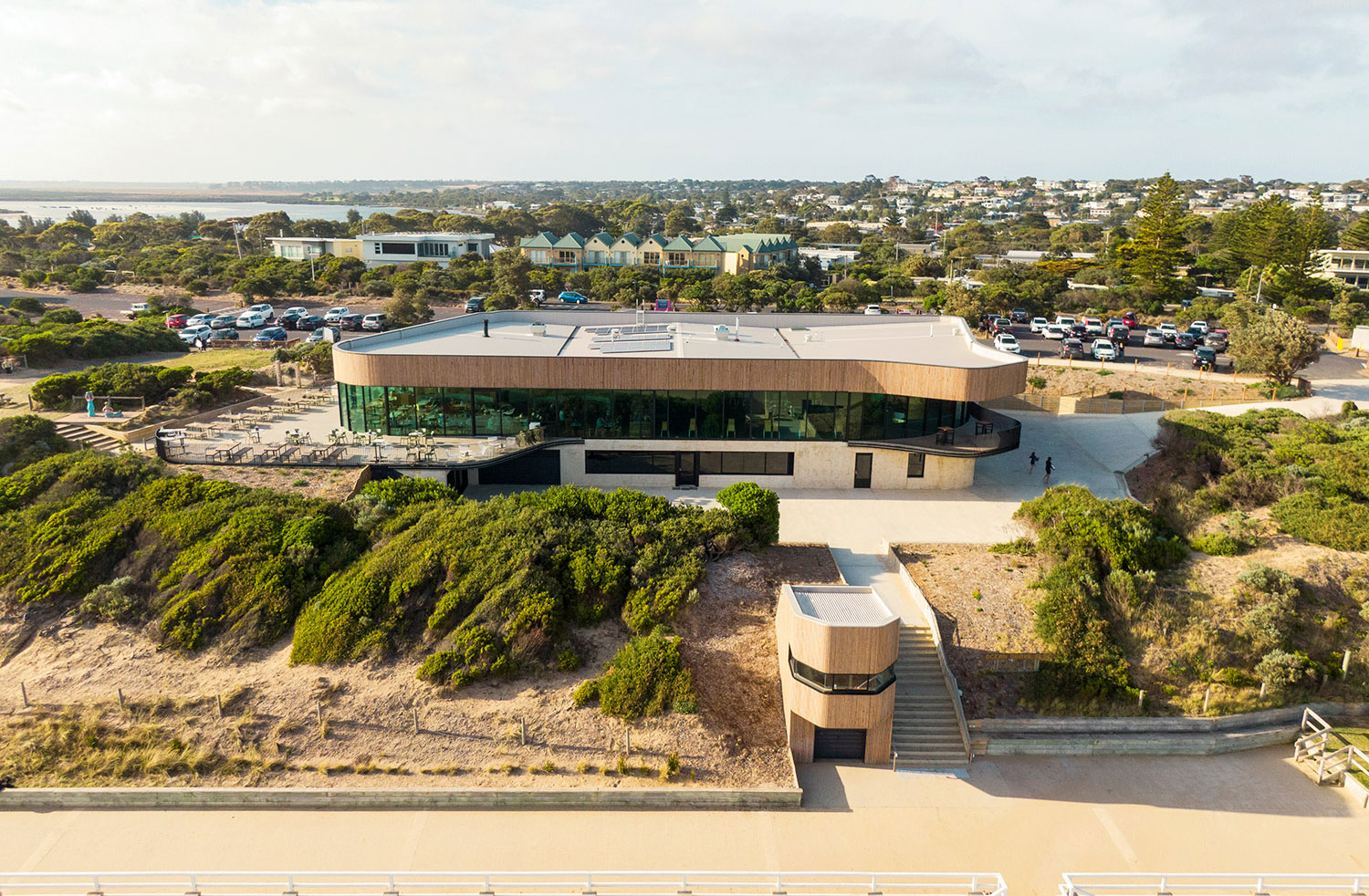 Wood Marsh has taken inspiration from the “corrosive nature of Victoria’s sandstone coastline” in this surf lifesaving club in Ocean Grove.

The centre, which opened in July 2019, is ‘positioned lightly’ in the landscape and divided across two levels so as to fit within the footprint of the original building.

“It subtly establishes a place where people come together around a shared appreciation of the waterfront.”

The building, which replaces the previous 25-year-old structure, is designed to “discretely tuck” into the slope of the site.

Above it, a curved timber-clad upper floor follows the contours of the landscape, “floating within the coastal vegetation”, and features the café and bar with terrace views of the Bass Straight.

Since the surf lifesaving club is also a social hub for the Ocean Grove community, operable walls and integrated acoustic treatment provide various configurations for hosting a wide range of functions in these spaces.

Visually, the entire ground plane is lifted to meet the top landing for improved accessibility.

A deliberate curving allows shadows to bleed around the corners, blurring harsh contours and helping the structure blend into the surrounding dunes.

“From most views, the building’s careful positioning and design give the illusion that it is a single-storey structure,” says Wood Marsh.

Materials were chosen to appear “softened by years of weathering” further adding to the visual illusion.

Natural timber, dark metal, concrete and glass “echo its connection to the ocean and eroded dunes”, draw strongly on contextual influences and are durable.

A short distance from the club, a separate control tower “stands like a protruding rock formation”. Designed as an angular structure in contrast with the softened edges of the main building, it allows surf lifesavers to patrol more of the beach and shelter from harsh weather.

Through a unified conceptual approach, the two buildings are physically and functionally separate, but share a strong dialogue.

“A robust ruggedness, through the ‘dune’ and ‘stack’ components, is represented in the relationship between the horizontality of the club building obscured in the dunes and the verticality of the more prominent control tower,” concludes Wood Marsh.

Established by Wood and Randal Marsh in 1983, Wood Marsh is a Melbourne-based architecture practice. Its most recent project, Piccolo House – a mixed-use building in Melbourne, is featured in the upcoming edition of inside magazine, on newsstands mid-March 2021.