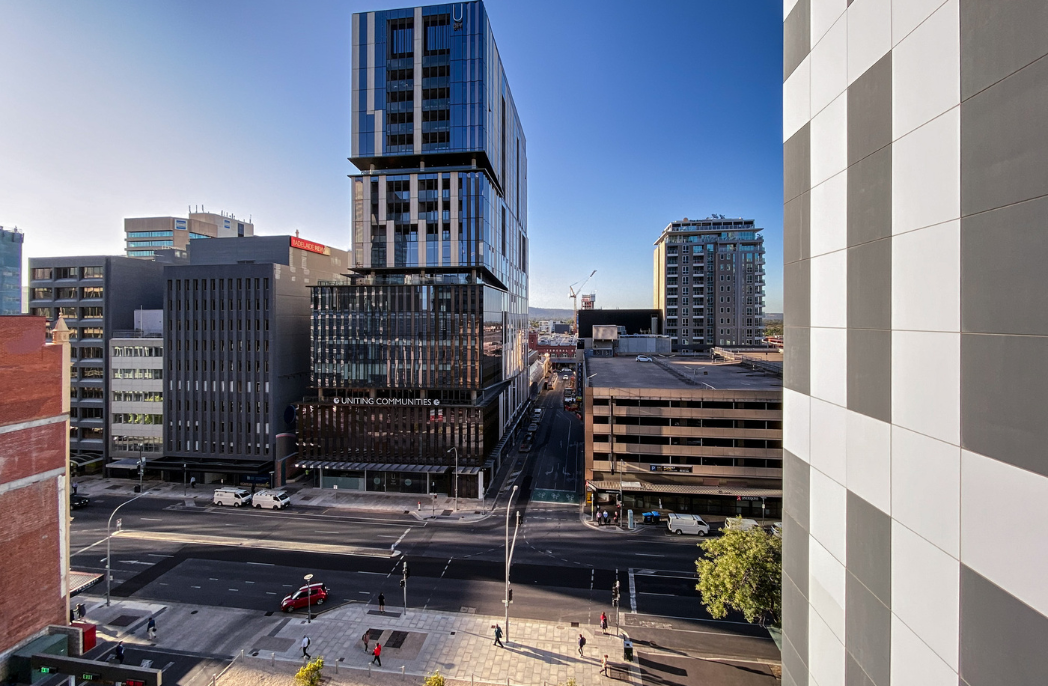 U City is located in Adelaide’s CBD. Redeveloped in 2019 for the Uniting Communities charity, it is the first building in South Australia to achieve Carbon Neutral Building Certification.

It has also received a 5 Star Green Star Performance rating via the Green Building Council of Australia (GBCA) and the Australian Government’s Climate Active Program.

Schrapel says in order to become carbon neutral, carbon offsets have been purchased and retired to cover the whole of the mixed-use building and the charity has committed to offset the building’s carbon emissions for a further 10 years.

The carbon offsets include biodiversity credits from the EcoAustralia native revegetation protection project, which covers 7350 square metres at Mount Sandy, near the Coorong, and a wind power project in Taiwan. Both projects contribute to the United Nations Sustainable Development Goals.

“Acknowledged by the Property Council of Australia as the nation’s best mixed-use development, U City was the first of its kind built in Australia. It blends Uniting Communities’ varied social services and offices with commercial, retail, hospitality and other tenants, a retirement village, NDIS supported long term accessible rentals and an accessible hotel,” says Schrapel.

Uniting Communities last year announced it had set a target to achieve Net Zero by 2035. It has also committed to optimising performance, with tracking and tuning applied to the building services to achieve ongoing energy efficiency and water ratings.

Sustainability is at the heart of U City and is considered in all aspects of the building’s operations, including in procurement, to ensure environmentally and socially conscious choices are made at all levels of business operations.

There are also regular assessments of employee and occupant satisfaction with the building’s performance, and transport surveys to raise awareness of sustainable options and to gather data for ongoing measurement.

Schrapel says U City’s residents, Uniting Communities’ employees working in the building and its visitors are committed to supporting efforts to achieve Net Zero and to drive a sustainable future.

“Our retirement village residents and our tenants are proud to occupy a building that is leading the way in environmental sustainability, and they’re willing to do their bit to ensure we leave as small a footprint as possible in our daily lives at U City,” he says.

Events held at the function centre can also claim carbon neutral water and energy use.