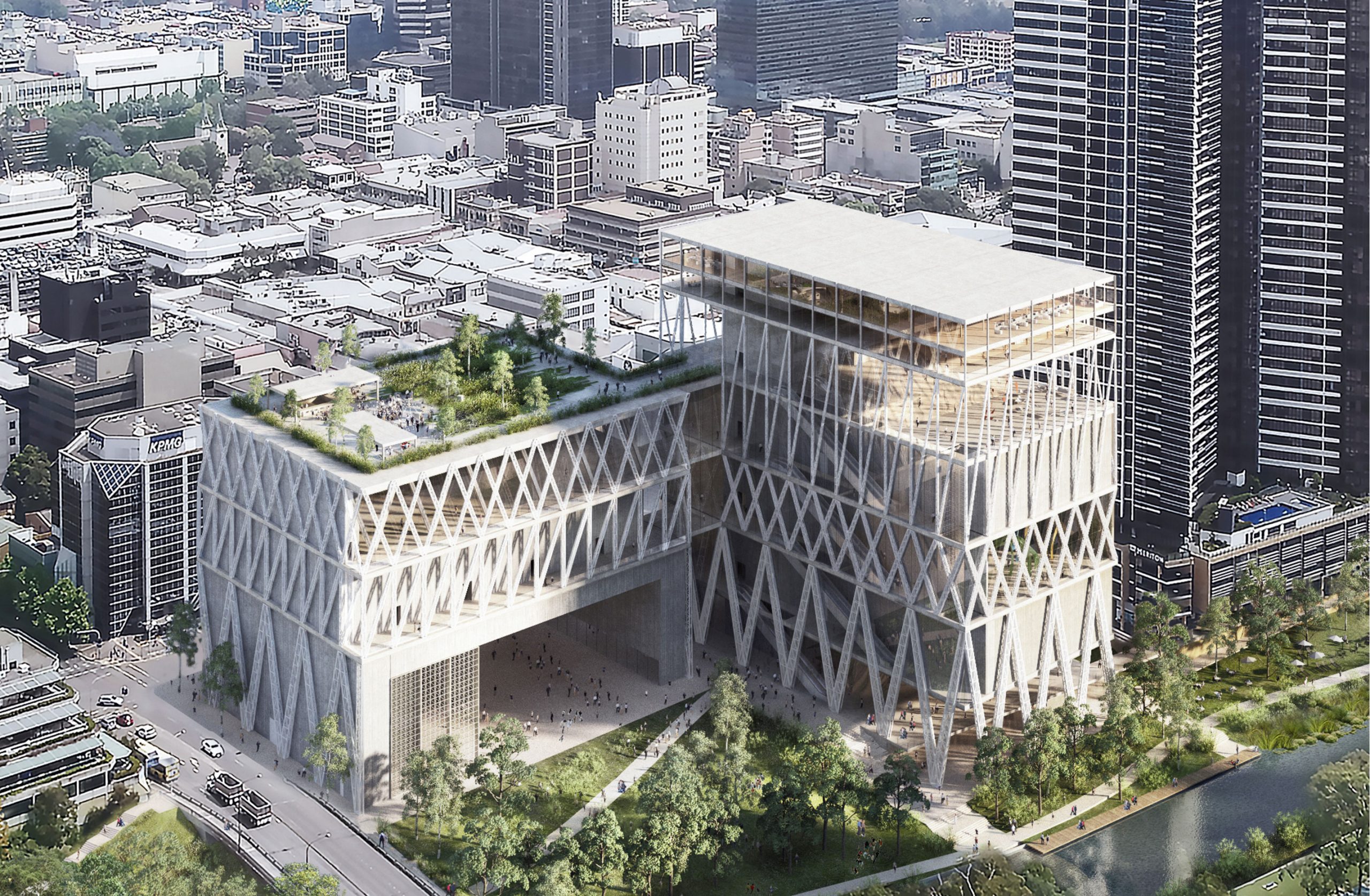 Jury Chair, Naomi Milgrom AO describes the winning design proposal as an elegant, robust and intelligent solution that creates a “a sense of joy.

“The proposed spatial organisation, transparency and lightness of the structure encapsulates the ambitions of the new Powerhouse. The external public realm will be generous, offering an exceptional public open space for Parramatta that will significantly extend the civic link and reinforce the important relationship of the city to the river.”

Moreau Kusunoki + Genton were chosen last week ahead of a shortlist of seven other teams: AL_A and Architectus, Bernardes Architecture and Scale Architecture, BVN Architecture and Carlo Ratti Associati, CHROFI and Reko Rennie, and Steven Holl Architects and Conrad Gargett.

The open two-stage international design competition was announced in January this year and featured a complicated brief to provide options for the retention or exclusion of heritage buildings, a museum unencumbered by multi-storey commercial towers, an exhibition space of 15,000 square metres and a riverside revitalisation.

The winning design will feature a “delicate latticed exoskeleton” that allows the public to see glimpses of the exhibition from the outside.

The structural steel lattice also amplifies the building’s efficiency, minimising weight and its carbon footprint with the highest lattices made from structural timber in what the design team hopes will make the museum appear as if it’s “dissolving into the sky”.

The museum will be part of a 24-hour precinct that connects it both to Parramatta’s social scene and the riverside – the latter being an important requirement of the brief.

To meet it, Moreau Kusunoki and Genton have oriented the building towards the riverfront, creating a shaded and green “breathing space”.

Inside, the multi-functional space will include seven presentation areas, 60 residential studios, exhibitions and education programs across science, technology and culture.

It’s tipped to be the the largest exhibition gallery of any museum in the country at 20 metres high and 3000 square metres.

However, plans for a multi-storey residential/commercial tower above the museum have been scrapped.

Moreau Kusunoki says the design team aspired to create an inclusive and welcoming place that was in “touch with the river, landscape and Country”.

“We envisage the Powerhouse Parramatta as a hyper-platform, a building with limitless potential, which continuously evolves. The built form treads lightly on the site, creating a porous ground plane,” says Kusunoki.

“The flexible and dynamic presentation spaces are linked through transparent connecting spaces, which offer a quiet place for reflection, a lively place for interaction, a safe neutral space for meetings and the creation of new shared memories. The Powerhouse will transcend scale to exist simultaneously as both intimate and iconic.”

The transparent space described by Kusunoki was inspired by the Japanese concept of ‘ma’ and is being designed as an in-between space that will serve multiple needs.

The Parramatta Powerhouse project has caused considerable backlash for the NSW government with protester objecting to the cost of the decision to move the institution from its home in Ultimo.

Create NSW has announced that almost $20 million has already been spent in relocation plans, but the government has put the “net cost” at $645 million.

Protestors say they object to the spending in light of the state’s drought and bushfires, as well as the tiny funding allocations given to NSW’s 300 volunteer museums.

The new museum will also involve the demolition of the heritage-listed 1870s Italianate villa and former maternity hospital Willow Grove, as well as St George’s Terrace.

Paris-based Moreau Kusunoki was founded by Nicolas Moreau, who previously worked with Kengo Kuma, and Hiroko Kusunoki, who worked for Hala Wardé at Ateliers Jean Nouvel.

Genton has practices in Sydney and Melbourne and was behind the Frankston Station redesign.