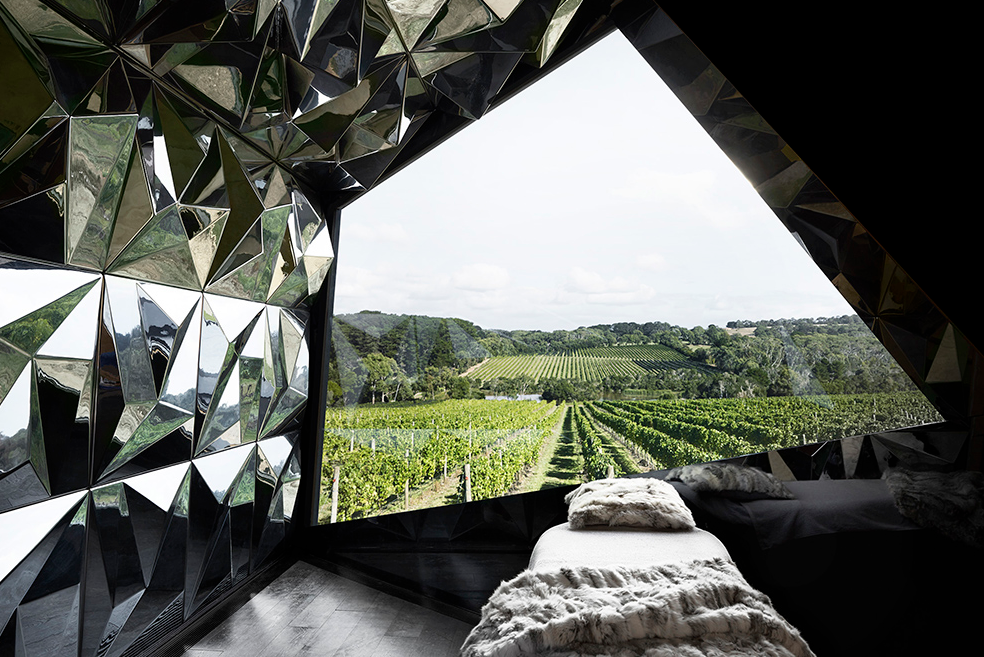 The 17 overall project winners from 17 years of IDEA

With less than two weeks to go until IDEA 2020 launches, we look back at the projects that took top crown in each past edition of the awards.

IDEA celebrates its 18th anniversary in 2020, making it one of the oldest interior design awards in the industry. So indulge us as we dig deep into the archives and relive the overall winner projects of the (almost) past two decades.

Fed Square was just coming to life when Hecker Phelan & Guthrie were commissioned this project, which won the overall prize at the inaugural IDEA in 2003. The brief was tackle two different sites. Downstairs was more like a bar and casual space and upstairs was a more challenging space because the client wanted to develop a fine dining concept.

The focus was all about pattern making. It was about trying to get that intensity – both in pattern and colour for the floor and wall finishes. Both were designed in unison, with each complimenting one another.

This project seems to have disappeared into the void. While we don’t know any details about this technicolour residence from 16 years ago, we know that this Melbourne architecture practice likes to rehearse living in each space, to imagine the experience and, throughout the project, is completely dedicated to thinking about what it is like to live/work in the spaces being realised.

This former church in a small town in regional Victoria was a collaboration between architect and designer Multiplicity and landscape sculptor Mel Ogden.

The design called for minimal incursion externally and for the interior architecture to be separate from the original built envelope. Internal spaces designated for private use were expressed as two vertical stacks offset from either side wall with a corridor between. Each stack contained pods on each level. The eastern stack contained bunk bedrooms at both ground and mezzanine levels. The other provided for laundry and shower rooms at ground floor level and provision for a bathroom at mezzanine level.

Gloss Creative director Amanda Henderson was in her fourth year of working on Moët’s tent when she saw a rendering of PTW Architecture’s national aquatic centre at the 2008 Beijing Summer Olympics – a building inspired by bubbles.

For the pavilion, PTW erected a standard tent frame of steel posts secured to a pine platform. The architects then draped the frame in two layers of PVC sheeting. A transparent outer layer provided protection from the elements, while the inner white layer featured a blade-cut pattern of circles meant to resemble champagne bubbles. The interior’s centrepiece was a white spandex membrane intended to represent the negative space between the junction of three bubbles. As daylight filtered through the perforations in the roof and walls, the result was an otherworldly shape awash in bubbles.

Located near rugged coastline, Cape Schanck House sits within an expanse of native trees subject to strong prevailing winds. Paul Morgan describes the home as a ‘breakthrough’ project for his practice, going as far as to call it ‘pure architecture’ – a project whose architectural intent was not mediated by constraints.

This modern-day beach shack is a product of its surrounding landscape and the strong environmental conditions it experiences close to the bay. Its frame was developed after thorough analysis of sunlight’s movement across the site, along with the wind’s frequency, speed and direction. The resulting design is both environmentally driven and aesthetically intriguing with walls and windows taking on uncommon angles and a white blob/water tank in the living room, which acts as a natural cooling system in warmer months.

The former 1888 Carriage Workshops building at Eveleigh is transformed into an innovative new centre committed to the conception, development and presentation of a wide spectrum of performance. Tonkin Zulaikha Greer’s adaptive reuse of the building as the Carriageworks Contemporary Arts Centre embraces the building’s past while providing it with a bold new future.

Three fully serviced, flexible theatre spaces, rehearsal rooms, administrative offices, workshop space and amenities are housed in discrete concrete boxes. These are clearly articulated from the heritage fabric, which retains its patina of age and use and its remaining industrial artefacts. The new forms stand free of the rows of original cast iron columns, creating circulation routes in the interstitial spaces with views through the building.

This 20,000 square metre hotel includes 18 bars, a ballroom and a rooftop pool, and draws inspiration from modern LA and Florida homes and Palm Springs glamour and nostalgia. A strong focus is placed on creating the illusion of a domestic environment through a series of interconnecting rooms, each with its own character and function, as well as clustered soft furnishings and lighting, and ‘one-off’ pieces.

The genius lies in the careful interrelation between all aspects of the venue, and the opulent mix of destinations. The precinct exists in an Ivy league of its own. Shortly after her win, Hecker Phelan & Guthrie founding partner Kerry Phelan left the practice to pursue her own creative pursuits.

The starting point of the design philosophy was the surrounding area, with the rustication of the historical maritime context deliberately enhanced. Oversized warehouse timber trusses, lead red coated surfaces, cage-like light fittings, shipping relics fused with Dani Marti Brillo Pad and commissioned rope canvases all conspire to surpass the standards of this genre of hotel.

A late 19th-century grocery warehouse with two street frontages is converted into a two-level residence by these Sydney architects. Internally, a 1.7 metre height difference between the two streets creates the tall volume of the living space.

The highlight of this project is its use of colour. All existing structure was retained, lined and painted white, while all new elements was painted black. This concept is carried through to the black and white rubber flooring. All joinery was finished in black anodised aluminium, including the bathroom on the upper level, which maintained the datum established by the height of the original window openings. The clear glazing above allowed light from the new clerestory window to illuminate the formerly dark centre of the deep open planned space.

Melbourne’s $1 billion Royal Children’s Hospital was based on ideas developed by the hospital encompassing a family-centred care model that put children and their families at the centre of the facility.

At a practical level, the Infinity Centre, a new senior school for the Penleigh and Essendon Grammar School, provided all the structured areas required of such a facility.

Beyond this, the design developed as an abstraction of the infinity symbol. The institution’s approach to teaching and learning was reflected through the key concepts embedded in the design – the dynamic between structure and fluidity and between uniformity and individuality.

Swathes of colour streak across the walls, floors and ceilings of rooms in both wings are part of a colour strategy to help students to differentiate between each department, making it a clear winner as IDEA celebrates its first decade.

A family house on a long, narrow and gently sloping site, incorporating an existing Victorian dwelling, minimises energy use through passive solar design and responds to the client’s request that the architecture reflect their extensive time living in various parts of Asia.

St Kilda West House is that wonderful culmination of aesthetics, functionality and being attuned to the client’s spatial and organisational needs. It is a house that is wholly liveable, when living is a lifestyle of varied and flowing personalities. At times austere, at others tactile, dramatic and social, it is also meandering, friendly and composed. It is, in fact, a house verging on the sublime.

The Melbourne School of Design for University of Melbourne’s Faculty of Architecture, Building and Planning creates an environment for flexible teaching and learning for students, researchers and academics. It is also an educational tool in itself through the considered use of materials and transparent overlapping of planning and spatial relationships.

The idea of what architecture can give back to the community also works at the scale of the university. Connecting back into the network of buildings and courtyards, the design operates as an urban gesture reinforcing the workings and systems of the campus.

It goes without saying that Indigo Slam is a masterpiece in our own backyard – but what became clear was that the interior for this building could have gone the other way and been very cold. Grand and impressive but too austere – the bare structure and the architecture could have overpowered the experience.

William and Smart Design Studio harness the stateliness of the home, but expertly address the human scale. Concrete and render are king here, but there is fine attention to detail in the use of brass, brick and marble. If even just for a moment we put aside the architecture of the house, the interiors really stand on their own.

Jackalope Hotel is in a class of its own. Set on the Mornington Peninsula, it breaks all the rules and redefines what a destination hotel can be.

Part object, part installation, part art, part theatre, Jackalope immerses guests in a journey that will delight and surprise. In a venue designed to provide an otherworldly experience rich with narrative and imagination, guests are transported away from the everyday with a fusion of art, design, dining and storytelling.

Capturing (rather than reinventing) the essence of Longrain, the design for this Tokyo restaurant draws inspiration from the cross bracing of the warehouse ceiling joists, and the ‘Woven Wall’ pattern of the Sydney iteration, while the red brick of the Heritage building and the green fish scale tiles of Melbourne are revisited.

The restaurant captures the Australian casual style of dining represented in both the Sydney and Melbourne venues and links the three venues visually. Strong motifs that have been identified within the existing venues are used to build a unique language for the new venue that criss-crosses the Australian, Thai and Japanese culture

While the design facilitates fundamental practical and functional aspects through consideration of all components within the facility, the innovative response has yielded the interior spaces of this private art gallery with drama and beauty in their proportions and precise and careful detailing.

Dramatic scale and the manipulation of volumes has always been a powerful tool in the designer kit. Combining this with an uncompromising pared back palette of concrete and blackened steel and skilfully juxtaposing the highly refined with the brutal, the Dangove Art Storage Facility is a truly memorable composition where architecture, engineering and interior are as one.

Keen to join the ranks of these incredible projects? Entries for IDEA 2020 open on Thursday 27 February.