Home • Architecture • Size isn’t everything: House A by Whispering Smith 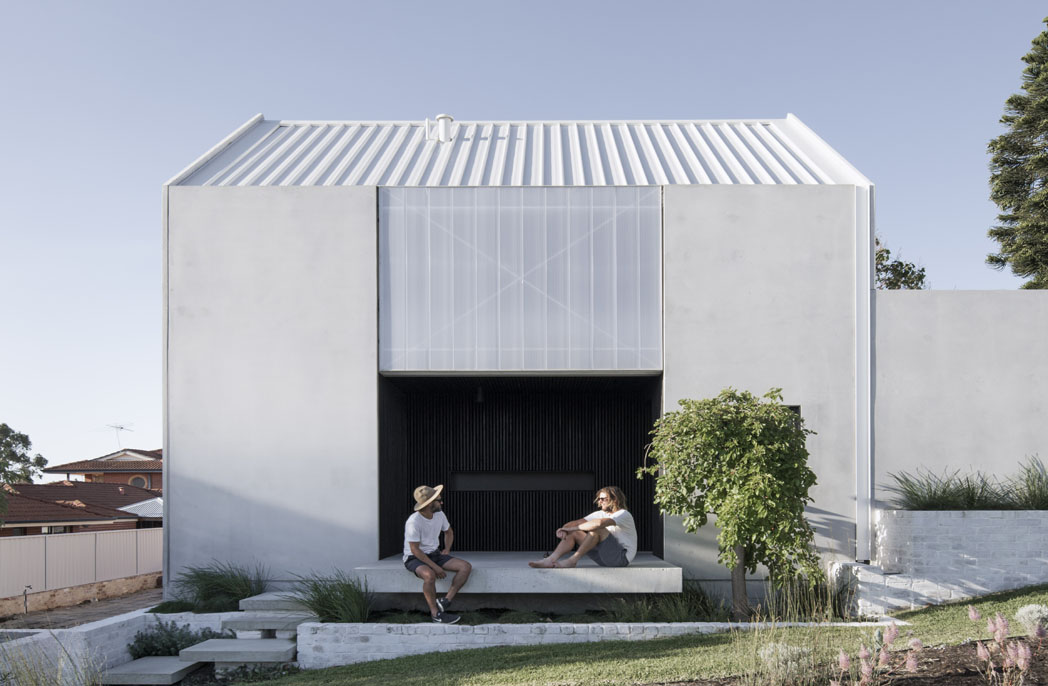 Kate fitzgerald, director of whispering smith, discusses House A, a home she built for herself and her partner that has an unusual size and appearance.

Whispering Smith’s House A is a challenge to the status quo of housing in Perth. The sustainable apartment-house hybrid is designed for small lots and uses commercial materials in an innovative way to achieve a tight footprint and carbon neutral status.

The brief was to take a 175-square metre block under Perth’s single bedroom dwelling code, and make an affordable and sustainable home for Whispering Smith’s director, Kate FitzGerald and her partner.

House A is 70 square metres of compact, flexible and delightful spaces, which are capable of hosting a dinner party for 30 guests, illustrating that small can be big. House A was the first house of three by Whispering Smith, in partnership with FitzGerald’s father. The diminutive footprint of the house was designed to maintain the existing mature trees and 1950s house on-site, with House A being allocated to the land left over.

The house is a product of highly efficient planning and employed commercial tilt-up concrete construction methods to achieve a tighter and taller footprint. The project relied heavily on craft, detailing and a raw material or wabi-sabi spec to provide amenity and delight in the small footprint. 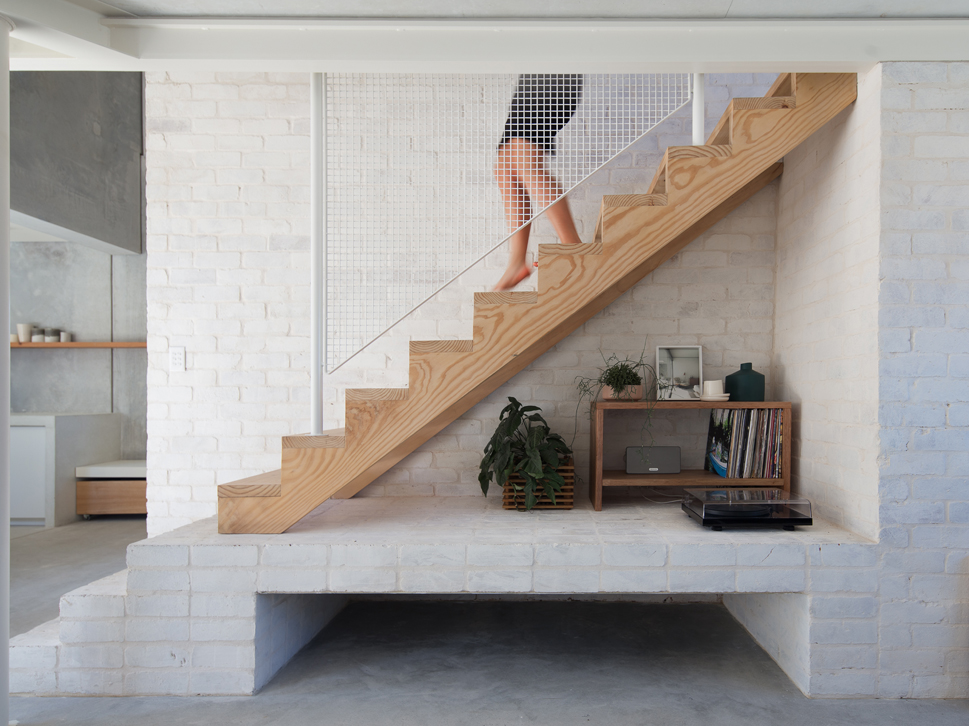 Whispering Smith merged spaces and volumes to achieve simultaneous privacy and openness without the need for doors and walls. When the cost of the build is considered in conjunction with the reduced investment in the land purchase, it is apparent that innovative architecture meant the project was a financially viable one for its Millennial occupants. House A’s front garden makes use of the verge as a native garden and outdoor living area and has increased the amenity of the occupants of the house, the residents of the street and the local birdlife.

Landscaping House A’s verge provides an important cultural and environmental benefit, as well as replacing the much needed green space for occupants as cities densify. Other sustainable aspects of the house include an underground rain tank, solar panels, recycled materials and an internal drying line. The soft grey concrete planes absorb and reflect the surrounding natural landscape, and House A’s minimal form is in stark contrast to its ubiquitous brick and tile neighbours.

In the evenings, the house almost disappears into the late afternoon light, softly reflecting the colours of Scarborough’s sunsets. The design of House A was originally intended to challenge the status quo of oversized and low-quality housing in Western Australia. Since its completion, the project has evolved to become a platform for Whispering Smith to share the positive power of architecture. 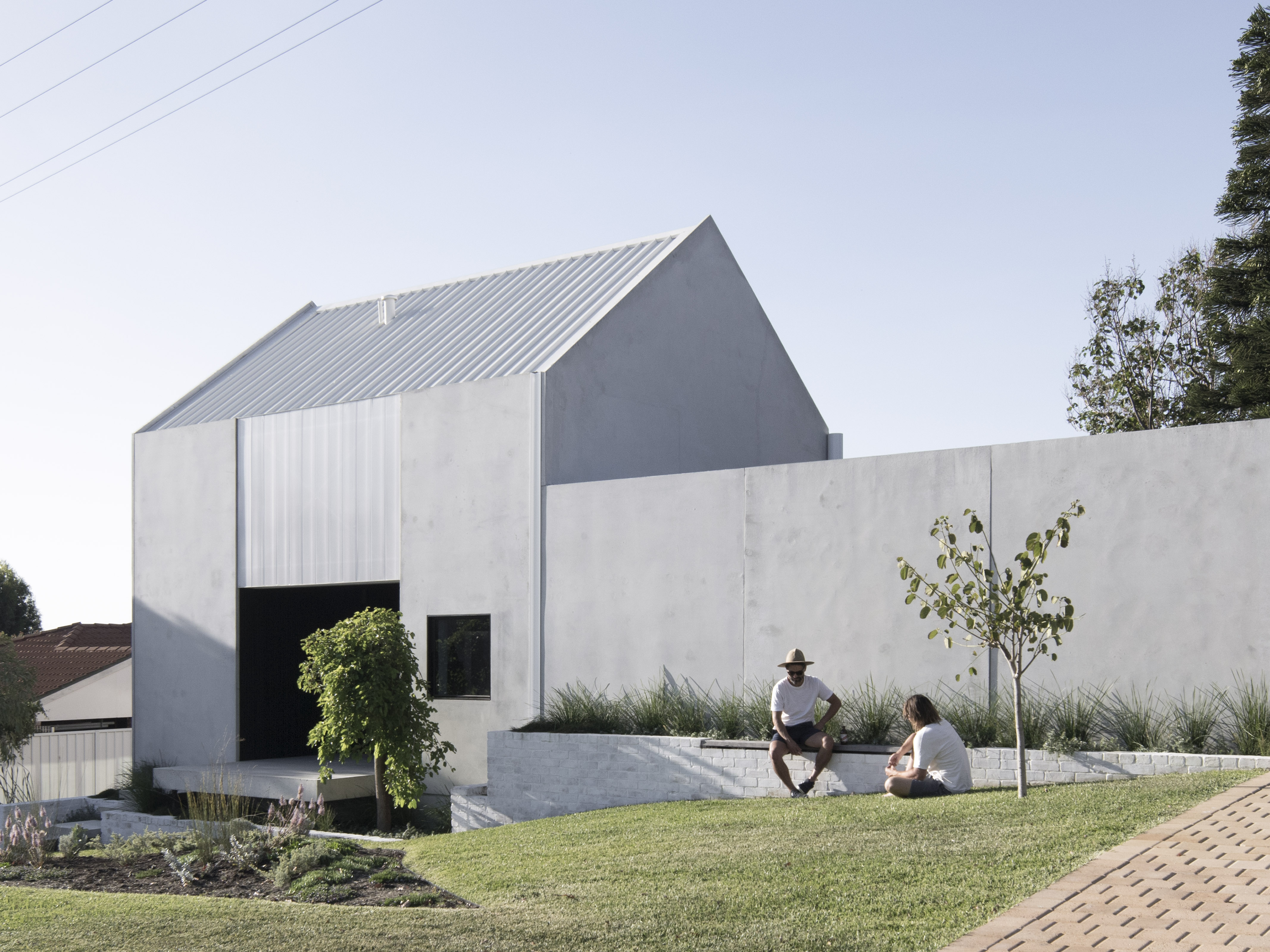 AR: What was the inspiration behind House A?

Kate Fitzgerald: House A embodies our desire to build something relevant for our generation. A lot of younger people and downsizers don’t have a lot of stuff or are having children much later, and we are using our homes for all kinds of things, from starting businesses or hosting a long table dinner for 20. We wanted to build a prototype house that did all of these things, while being affordable, sustainable and made from really beautiful, long-lasting materials, and we thought the best way was just to design and build it ourselves.

House A is the first of three dwellings; have the others been built or are they expected to be built?

House A is the first of three – House B is a renovation and extension of the existing character house, which will be up for sale at the end of 2018. House C is now the dream house for a young family and is halfway through the approvals process, due to start construction later this year. Can you briefly outline the concept and distinctive elements of the property? House A is our first foray into being a developer – we wanted to build a prototype for an apartment-house hybrid to show people how small can be big if you work hard at the design. The house itself is a really simple; it’s a stripped back set of concrete planes stacked together like a house of cards.

It’s really easy to see how it all fitted together and we worked hard to make each junction as simple and as beautiful as we could, so the house was easy to understand and our architecture was more approachable; more like an oversized paperweight than a house. We think there is something important in that ethos of minimalism, of making the hard choice to keep our designer ego out of the process to help us reduce the physical and environmental footprint of our houses at the same time as embracing simple, good design for a better life. 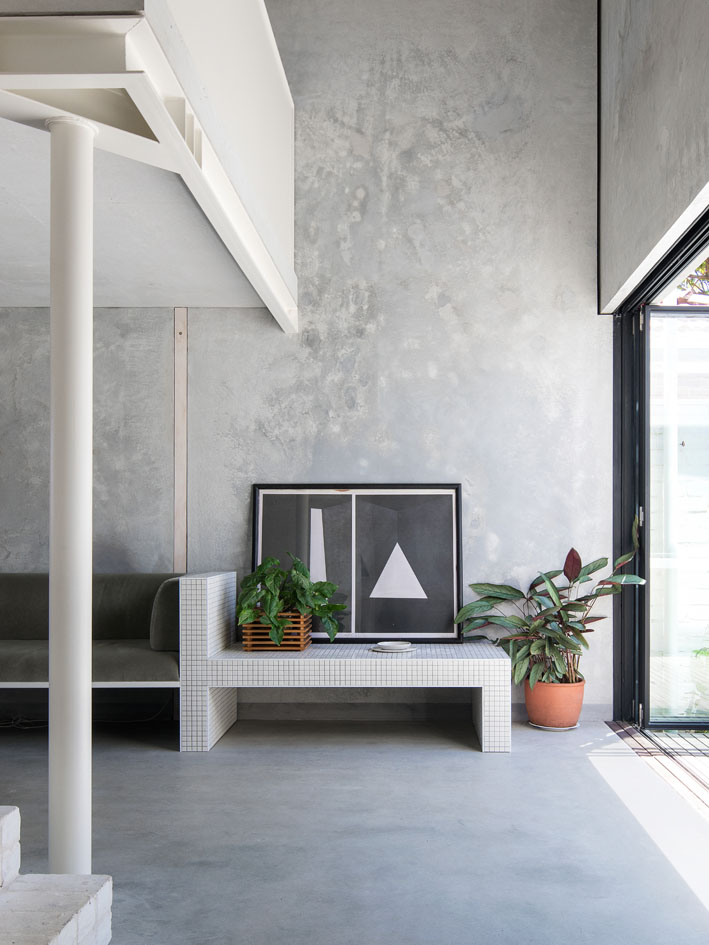 The colour palette of the home is very minimal; why is this?

We made a conscious decision to choose materials that would age well, were simple to understand and construct, and didn’t require cladding or extra finishes. We used lime paint, soap finish and linseed oil because the interior materials were largely the ‘finish’ themselves. The concrete will never need painting and will only get better as it ages. At dusk, the concrete panels absorb the evening colours and the light, and the house almost disappears into the sky, and there’s something really nice about that. I think ultimately the softer palette originated from a desire to have a space to unwind in that wasn’t oversaturated with trends or design features or glossy plastic finishes – it’s kind of like having a sniff of some coffee beans after you’ve smelt too many perfumes… It’s the perfect place to reset. 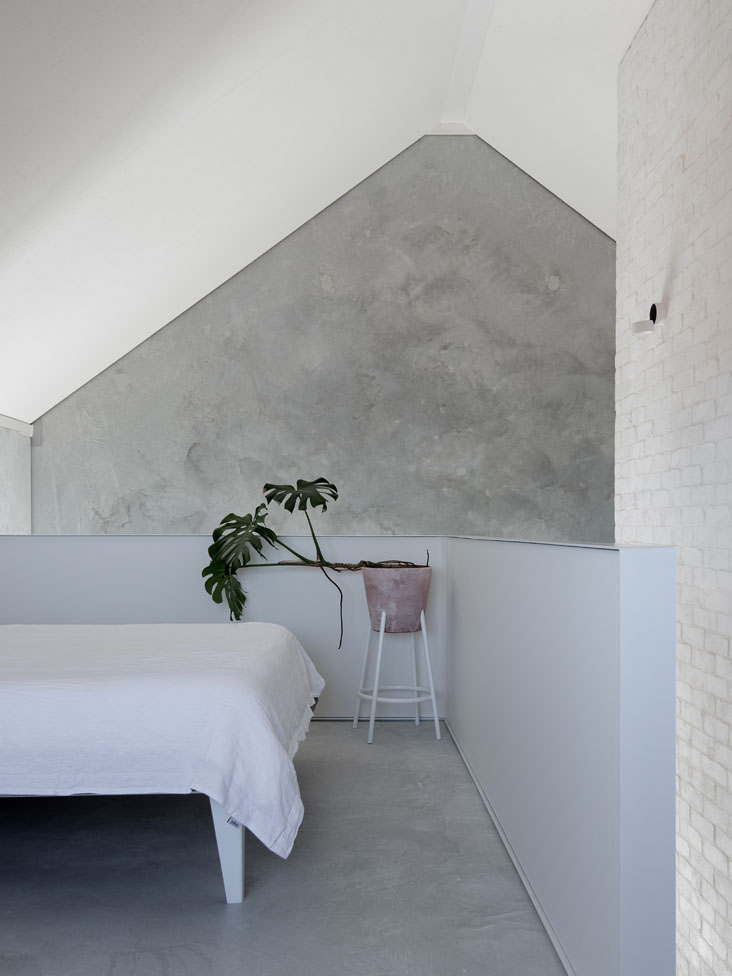 What recycled materials were used for the interiors?

We used a really high-recycled content mix for our tilt-up concrete walls, which have 65 percent slag (a by-product of steel production) instead of high carbon emitting Portland cement. We used recycled bricks in the walls and landscape, with some coming from the demolished parts of House B. We also recycled some of House B’s cabinetry, and custom milled old jarrah stud frames, which make up the charred timber entry.

What design elements are executed to create a spacious feeling in the home?

We worked really hard when we designed the floor plan and each space flows into the next, with the only door being to the loo. We can section off parts of the house for cosiness and privacy, but the most important part is that we can open up huge sections of it to the garden and courtyard. For six months of the year we live half outside. We hosted an informal night for planners and local government interested in seeing what a small house can be, and we had 30 guests that night. Someone made the comment that it feels more like a bar than a house, and that’s a mighty achievement for 70 square metres of floor area. 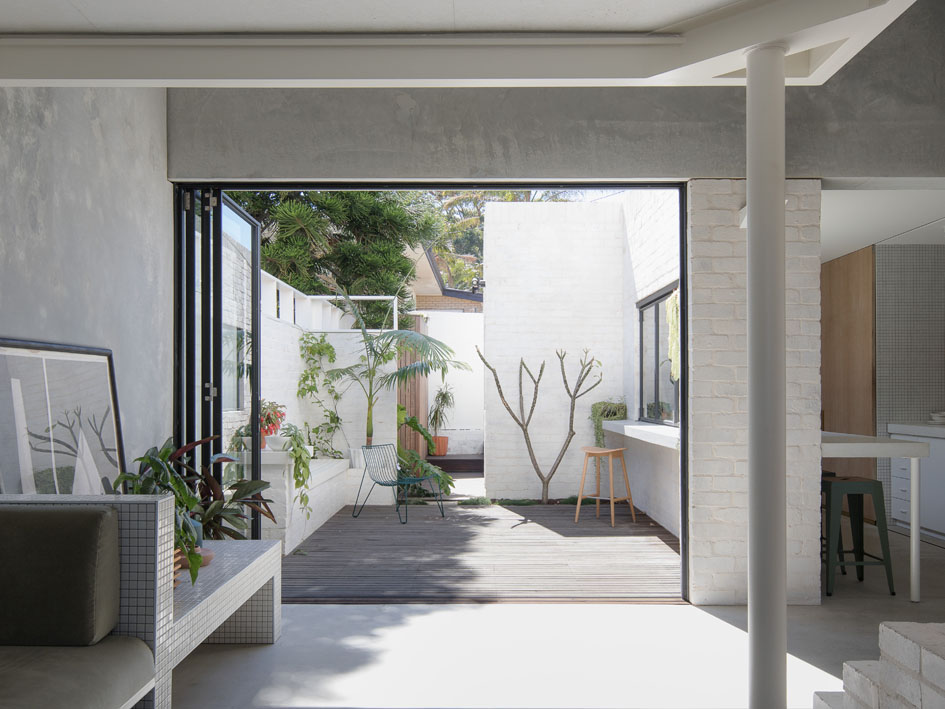 Did you use any other residential projects as inspiration?

We didn’t necessarily use other projects for inspiration but are constantly inspired by the ethos and ideas of other designers and other cultures – from wabi-sabi ideology in Japan through to Alvar Aalto’s ideas on beauty in everyday life or even the global movement against fast fashion. We’ve been lucky to practise among some incredible Aussie residential architects like Kennedy Nolan and Clare Cousins, and we’ve definitely been influenced by the work of those practices, and so many more. Ultimately, to create something truly minimal we had to switch off from Pinterest, Instagram and the daily bombardment of trends and cool stuff, so we could focus and create something that was just clever, simple and artful. This way of designing is now woven into the ethos of all our work at Whispering Smith and we’re so lucky we have the opportunity to practise architecture this way. 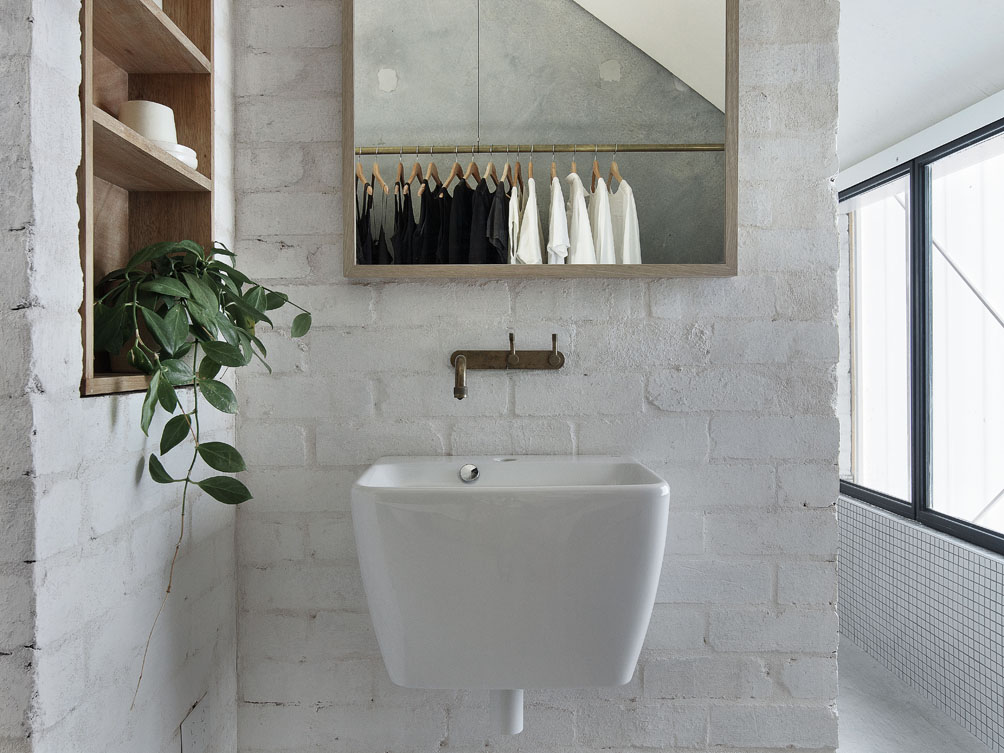 What have you enjoyed most about this project?

Definitely the people we’ve engaged with along the journey. We’ve built some great friendships and have been lucky enough to work with like-minded and talented people like our builder and all of the makers on-site. We’re now firm believers that a good culture on-site is critical to the success of our projects. It’s also been so encouraging to see the amount of support our hometown has given us; we’ve had so much interest from the local media and from locals who’ve stopped in to tell us that driving past House A is the highlight of their day. It doesn’t get much better than that.