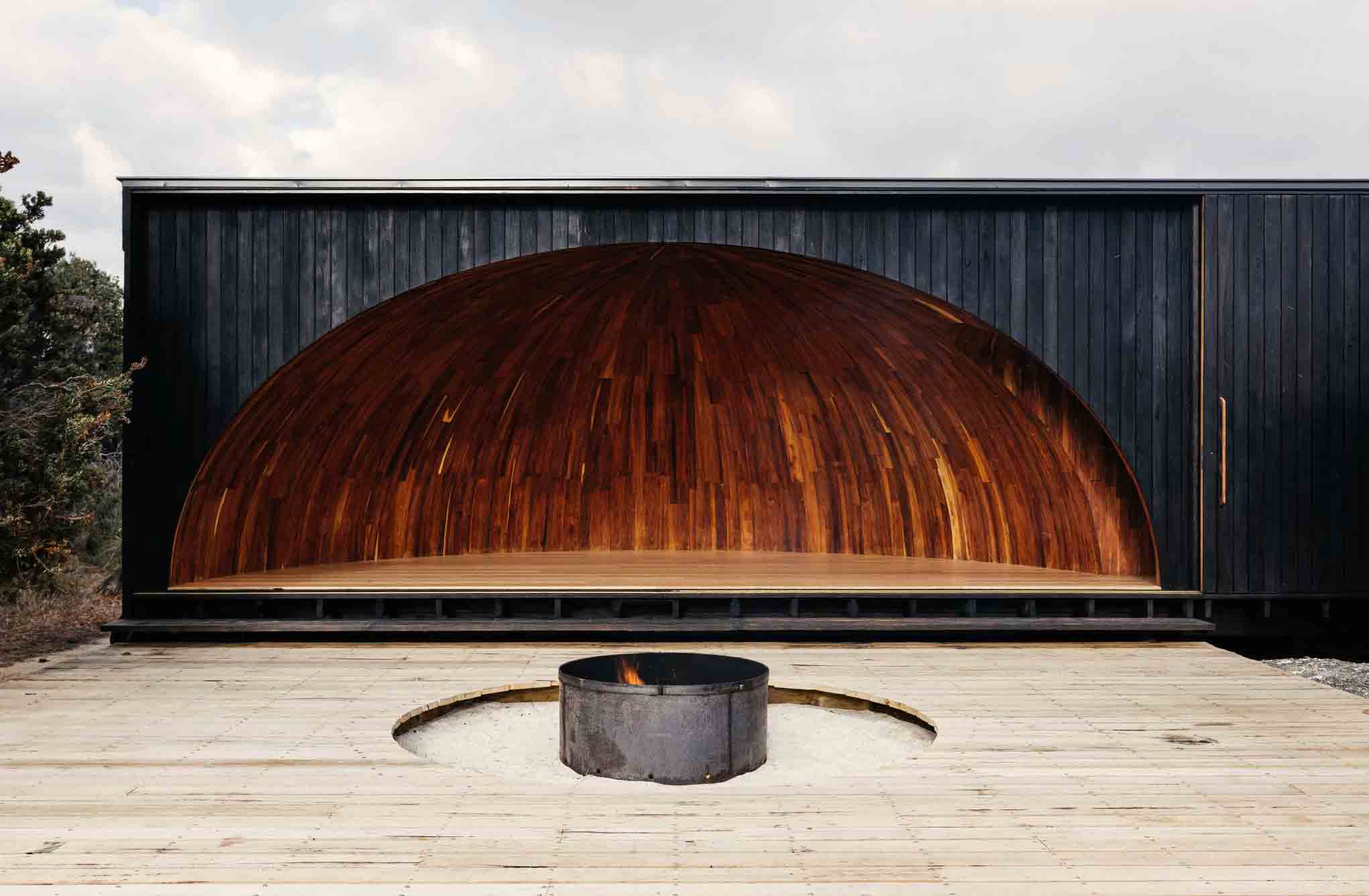 ADR heads back into the Tasmanian wilderness to explore how one of Australia’s most striking example of Indigenous architecture – Krakani-lumi – has adapted to its surroundings and the community that cares for it.

As the timber pavilions of krakani-lumi were airlifted into the Mount William (wukalina) National Park, architects Mat Hinds and Poppy Taylor stood amid the scrub, guiding the structures away from trees and shrubbery.

Such was the commitment of Taylor and Hinds, the firm enlisted to realise this iconic Aboriginal standing camp, in their efforts to maintain zero disturbance to the landscape.

Not a single tree was moved for the project, which was developed in close conversation with the Indigenous Palawa community and Aboriginal Land Council.

Taylor and Hinds produced a permanent camp that is entirely off-grid and deferential to its environment. The seven pavilions (one communal and six sleeping pods) were inspired by the traditional domed shelters of Tasmania’s First Peoples.

Since completion in 2017, the standing camp has accommodated regular tour groups on a two-night stopover along an Elder-led walk through the National Park, from wukalina to larapuna (Eddystone Point).

Krakani-lumi (translating to ‘resting place’ in modern Palawa Kani dialect) has been awarded a slew of prizes, including the John Lee Archer Triennial Prize at last year’s Tasmanian Architecture Awards.

The consultative approach taken by Taylor and Hinds stands as an exemplar of architectural practice with community.

It has set a standard of collaboration that Hinds says can inform the profession’s engagement with Indigenous communities.

“It will become a kind of seminal moment in our learning about practice,” he says.

“It made us realise that there is a dignified tradition in room making in the history of architecture, and if you can conceive of works on the basis of their interiority, that makes for a far more compelling contribution to architecture culture.”

The design was orchestrated around the particulars of Krakani-lumi, located at the northern end of the Bay of Fires, surrounded by banksia and set against a vast midden that shelters the site from the salt and wind of the nearby beach.

“The siting is really sophisticated, and that came from the trainee Aboriginal rangers,” Hinds says. “We just identified the richness of it, and used the building to accentuate those relationships, right down to the level of engagement with wildlife and the seasonal nature of that area.”

Boardwalks connecting the pavilions zigzag through diverse flora and fauna. The main dome faces east, to the rising sun, and morning sunlight plays across the landscape.

Scented paperbark fills the air and wildflowers draw the honeyeaters, calling through the scene with their distinctly high-pitched song.

The structures are made from locally-sourced materials, crafted almost completely with local timber. Within their exterior surfaces are hollows and nooks for animal life.

The inside of the communal cooking and bathing pavilion is unadorned and economical, with exposed cabinetry, simple silvered bulbs and hanging cord switches. Taut, pared-back interiors move the eye out of the timber frames and into the landscape.

Krakani-lumi can accommodate up to 12 people – two guides and 10 walkers. At night, groups gather around the central fire pit as embers dance against a dimming navy sky.

It is here that Palawa Elders share their creation story, and Hinds explains this function of the communal pavilion was the central premise around which the project was developed.

The play of interiority and exteriority, Hinds explains, was a key conceptual driver of the project.

Just as the telling of story and sharing of cultural knowledge opens an experiential interior, the spatiality of the constructions set up multiple interiors that can open and close to the wider landscape.

“These landscapes are not actually exteriors,” Hinds explains, reflecting on his first visit to the site with Clyde Mansell, then the chairman of the Tasmanian Aboriginal Land Council.

For a profession often focused on the external gaze upon a building, this represents a significant pivot in architectural thinking.

“Often, we are so much about the colonial gaze that we just want to see landscape rather than be in it,” Hinds says.

“When we consider the landscape as an interior, then we can conceive of these elements that really just furnish landscape.”

For this reason Hinds explains the individual pods are not buildings. “They are interiors within a larger interior,” he says, “or they are pieces of purposeful cabinetry in the landscape.”

When closed, Krakani-lumi is almost hidden, as charred-timber exteriors blend with the scrub. Without windows or glass, the site is opened by sliding back its doors and awnings. These ‘blind buildings’, Hinds explains, give agency to the Elders, as the site must be opened by a custodian.

In a striking image, a half-dome is excavated into the main structure, its underside showcasing the deep red and burnt orange ridges of the wood grain. This is a space held for story, a negative concave space, what Hinds describes as “an apse to a larger room”.

The circle motif of the dome is reinforced in the interior furnishings, with circular light fixtures, basins, ceiling patterns and joinery.

The six-year consultation and collaboration process can be summarised as “listening to each other, engaging with each other and actually going in to do the work,” he says.

“The community engaged us on the most open terms, and we produced something together that even surprised us by how compelling it is.”

He reflects on the project as a meeting of Indigenous cultural knowledge and Western architectural traditions.

“If we are entering the room as architects, architecture enters with us,” he explains. Architecture, crucially, is not left at the door. “Making places more focused, offering a heightened experience of the world, that’s what architecture can do.

“There is no greater form of respect than showing a community or a client the highest form of a proposition to their needs.”

Hailing from the small yet culturally rich location of Tasmania, Poppy Taylor and Mat Hinds are the architects behind the state’s award-winning practice Taylor + Hinds.