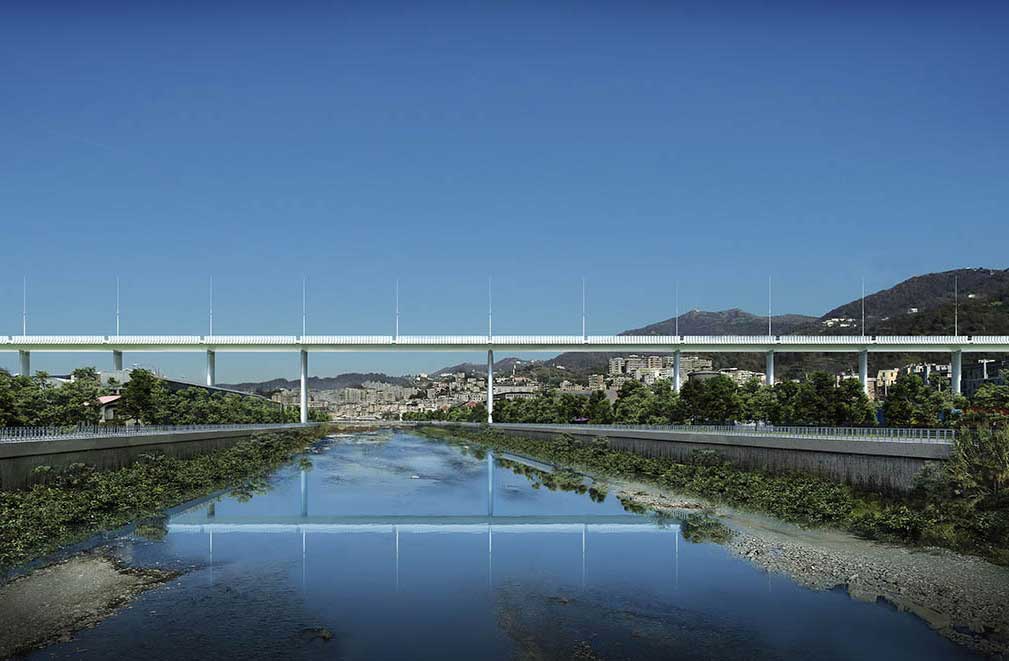 The San Giorgio Bridge – named after Genova’s patron saint – was unveiled earlier this month in place of the Morandi Bridge, which collapsed after poor maintenance failed to identify and repair weaknesses in the bridge’s structural components.

The bridge collapsed onto a railway line and warehouse 45 metres below on 14 August 2018 and had been named after the architect who worked on the original reinforced concrete structure in 1967.

In the aftermath of the disaster, Piano offered to donate the design of a bridge, asking for it to be renamed something other than Morandi.

The Italian architect designed the 200-million-euro ($278,000,000) project for the 1,100-metre-long replacement, inspired by the city’s historic maritime prominence and the bridge’s role in connecting the Genoa-Savona motorway with the Genoa-Valle del Po motorway.

Described by Piano as an “urban bridge”, the new deck is supported by 18 slender reinforced concrete piers that are reminiscent of a ship’s bow.

The 43 victims of bridge collapse are remembered in 43 lamps that cast a light across the bridge, shaped like ship sails.

Each of the piers has an elliptical section designed to allow the light to “slip” on the surface and help mitigate the impact on the neighbourhood below.

The use of a light colour for the coating of the steel elements makes the bridge “bright, harmonising its presence in the landscape,” said Renzo Piano Building Workshop.

The superstructure was built in times considered record-breaking, at least for Italy, with teams working in alternating shifts day and night to finish its construction before the second anniversary of the bridge’s collapse.

A series of metal fins and a 2.5-metre-high protective glass barrier complete the design, making it “possible to observe the surrounding landscape by crossing the new bridge”.

Solar panels will meet 95 per cent of its energy needs.

Importantly, the bridge will be continuously monitored using a system of internal sensors including accelerometers, extensometers, velocimeters, inclinometers and detectors for joint expansion.

Robots will run along rails on the bridge’s edge to monitor the structure externally and clean the solar panels.

“Genoa has proved to be a fragile city, a characteristic that can often be associated with beautiful and precious things,” said president of the Foundation of the Order of Architects of Genoa Lorenzo Trompetto in a statement.

“At a time of global economic crisis, our city can be a laboratory, a case study of development because it is less anchored than the great European capitals to speculative development.”

The new bridge will eventually be joined by a park designed by Stefano Boeri Architetti, Metrogramma Milano, and Inside Outside.

Connecting the two sides of the valley, a red steel circle will form a pathway for bikes and pedestrians.

The Italian government is currently conducting an inquiry into the bridge’s collapse and the management of its aged transport infrastructure.

Renzo Piano OMRI OMCA is an Italian architect. In 2015, he unveiled designs for the Whitney Museum in New York. He is also behind a trio of towers in Barangaroo, Sydney, last of which was completed in October 2019.