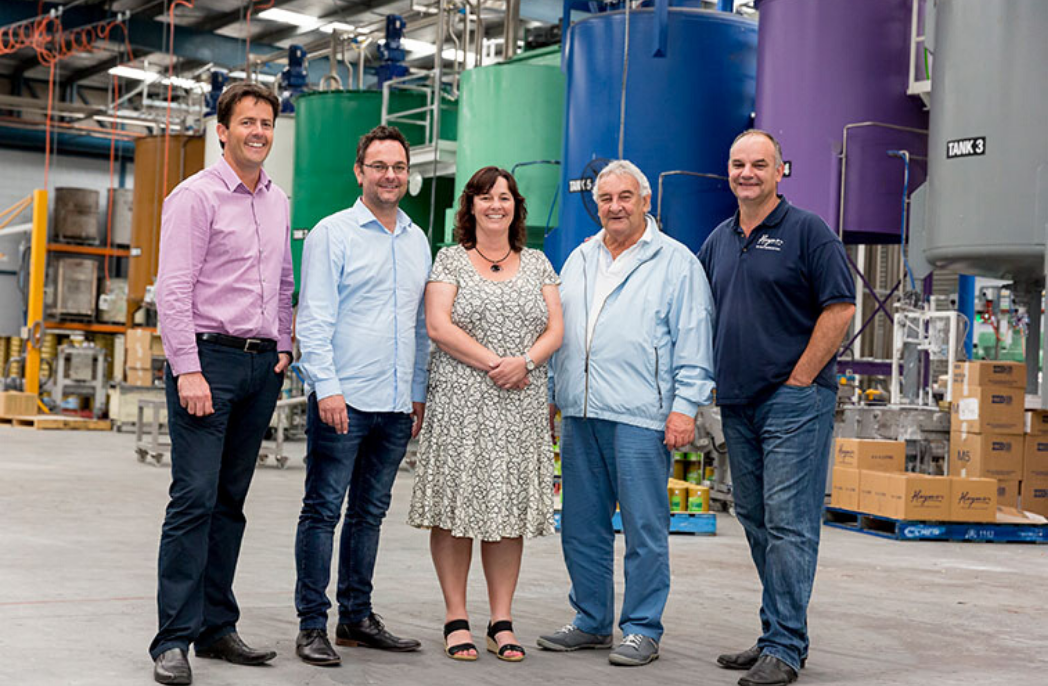 This year Australian comparison site Canstar Blue published its latest results in the Paint Ratings category. The ratings compared five well-known brands of paint and the winner, hands down, for the second year in a row was Haymes Paint.

Haymes scored an unbeatable five stars in all categories – overall satisfaction, durability, ease of application, value for money, quality of finish and range/variety.

It doesn’t get much better than that.

But when you consider the long heritage and serious pedigree of this family run brand, it’s no surprise that it has quality baked into its DNA.

It has to be said, however, that some people’s misplaced reliance on DNA nearly derailed the company’s success in the 1960s…

Haymes Paint was first established in the regional Victorian city of Ballarat by Henry Haymes back in 1935. Today it’s run by the third generation of the family – Tim Haymes, his middle brother Matthew, elder sister Belinda and her husband Rod Walton, who is the current CEO.

Their forebears had a paint and wallpaper shop from the late 1800s but grandfather Henry was always more interested in making than merely selling. He travelled to England to learn how to manufacture paint and then returned to Ballarat to put his new skills into practice.

Tim Haymes recalls his father David talking about a childhood spent in the workshop, experimenting with colours and materials and generally getting an early feel for the business and the importance of making sure a quality product was always the priority. Sadly Henry died when David was just a boy and the company was taken over by his Henry’s brothers. And this is where the unenlightened attitudes to genetics and family came into play. As David was adopted, the brothers neglected to involve him in the business and he was left to forge his own path, working for firms like Paddles and then the famous Hush Puppies brand.

David later told his children that he didn’t begrudge the exclusion, but that he suspected it may well have instilled in him a desire to succeed that was just that little bit more determined.

In May 1967, however, the Haymes brand was in trouble and heading for extinction. The then general manager contacted David to see if he’d be interested in coming back into the fold. Entering at the foreman level to make sure he really understood the nuts and bolts of the business, David rose to general manager by 1973 and then steered the business onwards and upwards for the next few decades.

In the early 1980s, with his three young children earning holiday wages working in the factory or front shop, the business was doing so well that David was able to buy it outright from the other shareholders and it has been a 100 percent family owned and run business ever since.

When it came time to step back a bit, while staying involved as chairman of the board, David looked to his family to carry on the tradition.

“He said, ‘Are you interested in this? Because if you’re not I’ll sell it’,” recalls Tim Haymes. “And we looked at each other as a family and thought Mum and Dad have built something that’s pretty special and to just give it away without us getting involved would be wrong.”

The fact that Haymes mentions both parents is testament to just how deeply this company is embedded in the family make-up. “Mum was a nurse,” he explains. “She never physically worked in the business, but she’s been as much a part of the decision-making, the drive of the family, as anyone.

“Dad, being the businessman, gets the accolades in the local papers but certainly from our perspective, and those who know us, Mum’s as important a piece of the puzzle.”

Haymes adds that the current management team see themselves as the custodians and leaders of a legacy brand. They hope that the next generation will want to take an active role, but they’re intent on building a strong team internally so that the brand is sustainable either way.

Haymes is well aware of the superstitions about family run firms, how first generations often establish something, second generations build upon and expand the company and then third generations “generally stuff things up!” But he says with the history of his grandfather and the big gap until his father took the reins, they’re considering themselves as essentially second-generation guardians.

“The statistics point out that 90 percent of family businesses that fail have nothing to do with external factors,” he says. “It’s all internal. Whether it’s succession issues, just poor handover or whatever. It’s really interesting.

“But I think with good governance, good mentorship, good leadership, it doesn’t matter what generation it is.”

With a current store network expansion underway, Haymes Paints will have around 300 staff by the end of the year, working with over 380 distributors. The preference is to sell through independent paint specialists and hardware suppliers. The company has also started to export internationally – with particular success in Japan to date – and online is on the horizon, but physical stores are still vitally important for the company, says Haymes.

“The paint industry is, globally, a really traditional industry,” he explains, “with traditional business models. And also paint is very tactile. People like to touch and feel and see what they’re going to put on probably their most important asset – their house or commercial building. Which can be a good or a bad thing in terms of the industry itself. It means you have to spend much more money on bricks and mortar, and have stores, and have distribution points. But it’s nice too that it is still that sort of hand-made, hand-appreciated and visually-appreciated medium.”

And when it’s a product with a serious pedigree like Haymes Paint, that appreciation really means something.