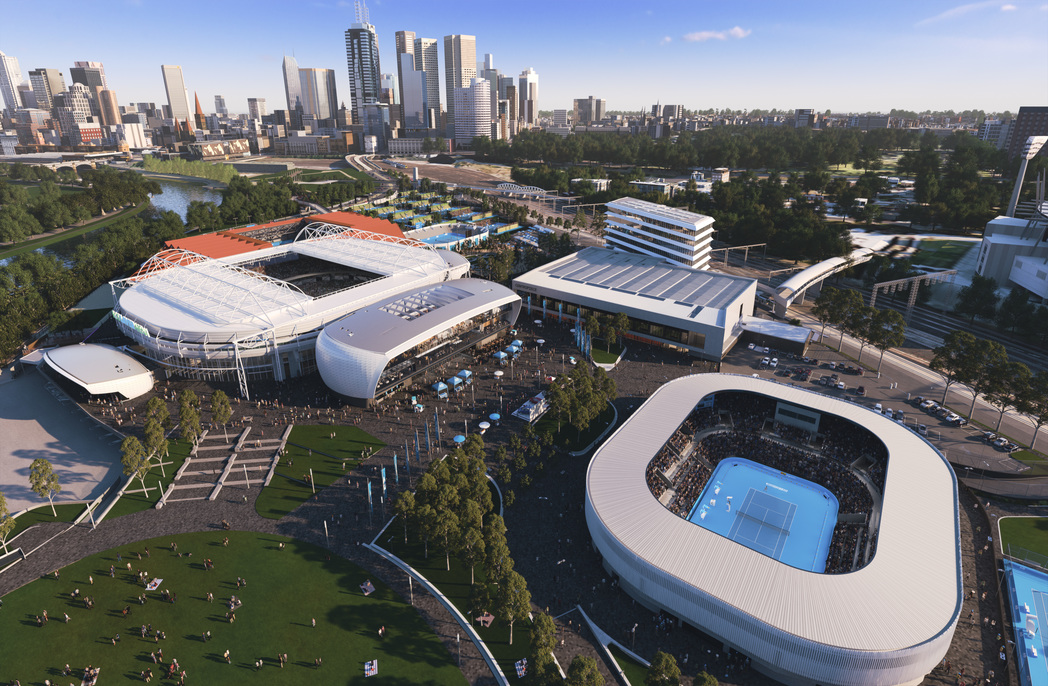 Melbourne-based NH Architecture has revealed its flexible design for the CENTREPIECE at Melbourne Park event space.

The firm was selected to design CENTREPIECE as part of the Melbourne & Olympic Park precinct’s third and final stage of its $972 million redevelopment.

The design team was challenged with creating an event space with the inbuilt adaptability to transform from hosting corporate functions, weddings and conferences to a sophisticated media centre broadcasting the Australian Open Tennis Grand Slam.

As part of the design process, NH Architecture embarked on a world tour to research venue leaders across sporting, entertainment and events spaces.

“We visited global cities including Barcelona, Seoul, Berlin, Dallas and London – and, to our surprise, found many convention and sporting centres were similar in look and feel. There was no major point of difference – they could have been almost anywhere in the world and didn’t celebrate the uniqueness their respective cities had to offer,” said Hamish Lyon, NH Architecture director and design lead

In stark contrast, CENTREPIECE is a celebration of the “Melbourness” of the site Located adjacent to the CBD and parklands, and interconnected by walking path, rail, road and river, the new venue has been designed with Melbourne at its core – from its people and culture, to its diverse entertainment capabilities.

“With sweeping views of the city skyline and natural light through the entire space, we introduced an Outdoor Terrace overlooking Garden Square. Guests are able to step outside and access the outdoors as they wish, so that they do feel like they’re part of the precinct and not locked away in a standard function room,” says Lyon.

“Every touch point has been designed with keeping guests connected to the city, whether it’s a large-scale function, gala or intimate sit-down lunch – there is a physical or emotive link in each room and space.”

This year proved to be a uniquely tumultuous time to be designing an event space as the global COVID-19 pandemic and subsequent physical distancing regulations caused the cancellation of all large-scale gatherings.

CENTREPIECE’s flexibility reflects its development during this historic period and the design affordances that may emerge post-pandemic to allow for social distancing measures.

“The building has been designed to have the flexibility to close off certain parts, which has become a positive for a variety of reasons outside of COVID-19, including having a secluded broadcast operation available during the Australian Open,” Lyon told ADR.

“Essentially, this means there are parts of the building that can operate in isolation and there are multiple entry points on multiple levels to ensure seamless entrances and exits.”

“It has become incredibly flexible in that regard, we’re able to offer systems that can be completely independent secure zones if required, which a lot of people are finding attractive given the current uncertainty.”

In response to its adaptability, Jan Vastesaeger, senior associate of NH Architecture said: “The flexibility and the double nature of the building operationally means there is a higher degree of interconnectivity and pathways that exist. Another key aspect of the development that the general public wouldn’t necessarily see is CENTREPIECE’s logistics and back-of-house infrastructure.”

“It was a major part of the puzzle to resolve – how the venue connects and supports its surrounding venues and facilities at its lower levels to become the central beating heart for the precinct.”