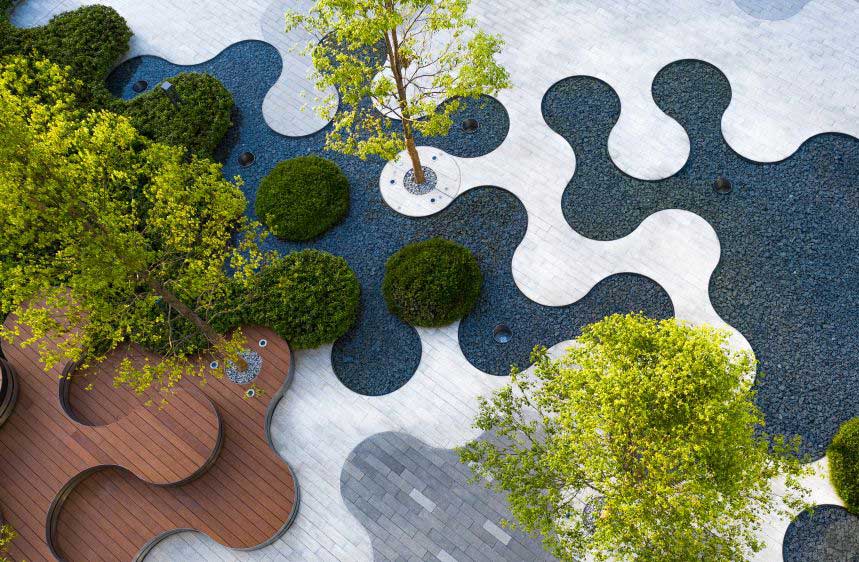 Dubbed the HyperLane, the 2.4-kilometre park links the Chengdu fast train station with the city’s music and arts university district.

The site in China’s Sichuan province was originally a series of “derelict walled spaces” that separated the student accommodation from the university campus, driving traffic between the two sites through a number of small alleyways.

“It was these alleyways, crammed with life, people and food sellers that offered inspiration,” says ASPECT Studios.

“The vibrant urban art and graffiti demonstrated the artistic energy that laid under the surface of the community.”

The global landscape architecture and urban design practice designed a barrier free skypark and pedestrian network to better tie together the university and accomodation, but also support “community connection” through creative arts and music.

Conceptualised pre-COVID-19, with construction completed shortly after lockdown, the project responded to local guidelines on social distancing within an urban space.

The first phase to be completed, The Urban Gallery, was designed as a “social experiential place” ready to host a permanent programme of events.

It features the The Water Carpet – a series of shallow water pools with curved edges, lighting displays, textural contrast and planting pockets that connect the promenade to the Performance Gallery.

Enclosed to the east is a sculptural timber terrace deck, perfectly positioned under the shade of the trees for anyone keen to watch these performances.

While to the north, a curved fence of white plinths acts as a backdrop to the garden and screens a carpark.

“The landscape design of the scheme is founded on the principle of creating a balanced system that responds to both the humanistic and environmental needs of the project,” adds ASPECT Studios.

“A series of youth community-oriented networks, connections, social spaces, performance and creative arts programmes and activities interplay with a response to the site’s natural systems.”

Ample lighting and edge displays of perforated steel illuminate the spaces 24/7 for added security and to encourage residents to gather after the workday.

A key feature of ASPECT Studio’s design was also the use of local species, including the Phoebe Zhennan tree, which is native to Chengdu and registered on the endangered species list.

These, coupled with a system to “passively absorb, clean and use rainfall in an ecologically sensitive way”, encourage insects, birds and wildlife back to the urban corridor.

The Urban Gallery is the first phase of an urban development project in Chengdu featuring ASPECT Studios and international architecture firm AEDAS.

ASPECT Studios is a design firm specialising in landscape architecture, urban design, wayfinding and urban strategy with studios in Australia, Asia and the Middle East.

The studio recently showcased the “DNA of Li’long” in the Shanghai lifestyle destination The Roof.