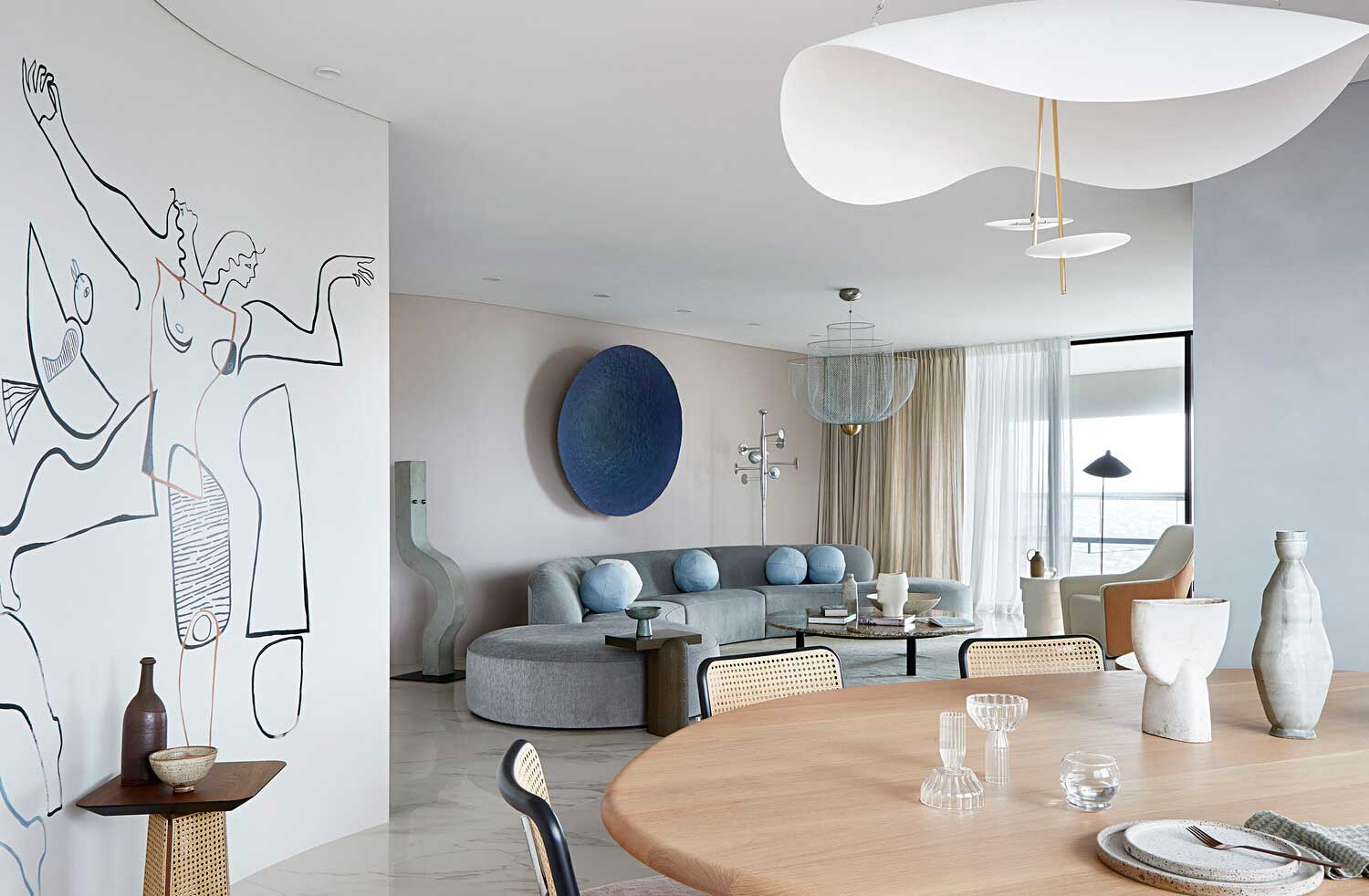 You mightn’t have heard of Alicia Holgar just yet, but the Brisbane-based interior designer’s latest project has made her the darling of the local design media.

Holgar has us swooning over Avian Apartment – a fluid and flowing Brisbane apartment that is all curves, cantilevers and custom-designed furniture perfectly suited to the Harry Seidler building it inhabits.

We’re particularly besotted by The Avians, a pair of line-work murals by LA-based artist Jessalyn Brooks that is impossible to turn away from, referencing the apartment’s outlook over the Brisbane skyline in a way that is subtle, seductive and unabashedly feminine.

And did we mention Holgar also happens to be the granddaughter of Melbourne husband-and-wife architects John and Helen Holgar?

So when I heard Holgar was starting her own interior design studio full-time (after years at Architectus), I couldn’t pass up the opportunity to sit down with a little slice of Aussie design royalty to chat about her career, her European sensibilities and the apartment that has us all giddy.

ADR: Hi Alicia! Tell us about yourself. What led you to interior design?

Before I was 10 years old, I was writing my own music, obsessed with dogs and horses, in art school, rearranging my room on the weekly, redesigning our home gardens and sketching ideas for my future farm from the master plan through to how each space would flow, look and feel for my family and animals.

Despite my family history, deciding on a career in design naturally became the most wholesome choice as it equally challenges the left and right sides of the brain, requires heart and soul and marries the majority of my talents and interests. I could not have committed to a profession I wasn’t wholeheartedly passionate about.

How would you describe your design sensibility?

AH: My family are Polish and French, so there has always been close ties to Europe. I deeply resonate with many European sentiments, particularly their enduring love of natural materials, quality over quantity, passion and purpose, slower way of living and freedom of expression in life and love.

My style keeps evolving. I remain innately drawn to provide a sensibility with my practice that equally upholds ethics and aesthetics. My practice is also guided by principles respectful of environment, community, place and people that aim to keep the small to big picture aligned.

How do you want people to feel when they walk into an Alicia Holgar space?

AH: That is such a great question and much thought goes into this aspect.

I believe all things are made up of energy and just like a gourmet versus fast food meal, what you put in, is what you’ll get out. I’m not a churn and burn practice and never will be. Investing in positive relationships, considered research, conscious creativity and intuition is of great importance as I work through the project puzzle. In the end, an outcome is the sum of many parts, not all of which we can control.

The hope is that in consideration of the unique brief, budget and timeframe, I will have maximised the available opportunities to create a harmony of aesthetic and ethic, form and function, reverence and atmosphere. I hope that people will naturally feel at ease and resonate with these environments, and that they will become their sanctuary for wellness and wellbeing.

I know you’ve just started your own interior design studio, but has there been any particular project that has changed your course as a designer?

AH: After my role at Architectus was unexpectedly made redundant due to COVID-19, I have been contemplating what’s next. By fate or fortune, just weeks after this departure came news of the win and commendation for the Avian Apartment at the Australia Interior Design Awards. This was the first time I had entered for an award and have been completely humbled by the response.

These serendipitous events have somewhat become the cornerstone to my journey into private practice and in this current time, given me hope for the future.

Can you tell us a little about Avian Apartment? Congrats on the commendations and awards, by the way!

AH: Thank you very much! The brief was to re-imagine the couple’s apartment into an elegant, luxurious and impressive residence with a light and welcoming atmosphere. Laden with black and red furniture on a stark palette of finishes, the initial space felt cold and abrupt.

Through a sustainable minimum input, maximum output approach that supported an array of local charities, suppliers and craftsmen, the project has achieved an impressive transformation.

A creative layering process has allowed the interior environment to extend and unfold with authentic innovation, craftsmanship, originality and resonance that is respectfully tailored to the client.

Tell us about the mural.

AH: There is quite a back story! It began with the spatial planning of a completely fluid and open floor plan. Within the dining area, there was a long wall around two thirds straight and one third curved. Due to its scale, a singular artwork would have had to be of a considerable size and would have likely cost a significant amount of money.

To equalise the spatial demands with the brief and budget, I began to brainstorm. I discovered Harry Seidler’s use of murals and integrated sculptural artworks to enliven architecture spaces. Le Corbusier, one of my all-time favourite architects, had also vastly experimented with murals.

One Le Corbusier mural which really struck a chord with me was line-work of primordial, Picasso-esque people in France. And so, the idea for a similar mural on this sweeping dining wall was born.

Trying to then find the right artist who had an empathic free line approach was the next hurdle. It was by pure coincidence that I came across an incredible upcoming artist, Jessalyn Brooks, based in LA. A completely naturally gifted, creatively inspiring being whose line-works were the only that I knew of in the world that reflected the essence of the Picasso/ Le Corbusier approach.

For a week, she became an artist in residence at the apartment. Following a creative process that ebbed and flowed throughout the week, the result was two captivating original murals, one within the dining space and another inverted white line work on a grey distemper wall finish within the entry foyer.

As romantic as the process had been, she entitled the works The Avians, which in Greek mythology reference bird people and in this setting, they pay homage to the client’s life above the city skyline.

AH: The natural world is also the epitome of design in depth and degree. While we may never fully understand its intricate complexities there is still so much we can learn from exploring natural forms and functions, sustainably sourced materials, colour palettes and textures. It’s interesting to observe that most elements in nature are also functional, beautiful or both, and I try to remember this every time I’m contemplating my practice.

I am also an avid adventurer. I am one of those people who loves going off the beaten track, turning left when everyone else is turning right. Perhaps that has been a frustration for some, particularly my parents!

Lastly art inspires me in every way possible, from the smallest ceramic object to sculptural expressions in built form. What I love most is that it allows a blank canvas for self-expression and there are no rules. I could not imagine a world without the arts. It is what expands our hearts and our minds and gives it flavour, romance and substance.

What designers, peers and creatives do you admire?

AH: This is a tough question as I am constantly inspired by creatives from all over the world, past and present. It goes without saying that my grandparents and modernist architects Helen and John Holgar greatly influenced my love and appreciation for architecture and design.

Following the devastation of Poland during WWII where they were part of the military and uprising, they navigated their way to Italy and England to finish their architectural studies, gain work experience and get married. However, the communist regime in Poland prevented them from returning. As young adults looking for a fresh start, they immigrated to Australia and established their practice in 1957.

What would be your dream project?

AH: I would love to do something different and create a spatial environment that is pared back, raw and authentic. A space that is minimal but warm, organic but modern, sculptural but practical.

The material palette would be close to nature, earthy with textural variation integrated through custom designed and curated pieces.

In a time where environmental issues are surmounting and we are drowning in waste, this space would be a humble opportunity to explore how we can meaningfully live with less and craft a sanctuary for wellness and wellbeing on the inside and outside.

What are some of the challenges of being a designer today?

AH: I transitioned to study interior design in my late-twenties after a previous career working in property, project management and development.

Other than wanting to pursue a more creative profession, one of the main reasons I transitioned was that development was largely male dominated at the time. I have no issue with men and very much like working with them, but this meant there was a glass ceiling. To be a female at the top of development, I felt I had to change aspects of who I was to ensure I could not only break through, but weather the constant challenges.

From my perspective, the main issue with design in Australia is regulation. In some countries you need to have a degree to be an interior designer, yet there is no such requirement in Australia. For the general public and credibility of the profession, this is a grey area that we are constantly navigating.

AH: COVID-19 has certainly thrown a few unexpected hurdles. I have been a workaholic and am taking the downturn as an opportunity to explore a more sustainable work life balance.

I am currently working on a beautiful Heritage home in Brisbane for an amazing family. We have been tasked with a full renovation and extension and the transformation is going to be remarkable.

Collaborating with like-minded people, companies and project teams is everything and I hope that more of these relationships will build over time.

This feature is part of our ongoing interview series with Australian designers and architects. Check out our most recent chat with Melbourne design luminary Christopher Boots.