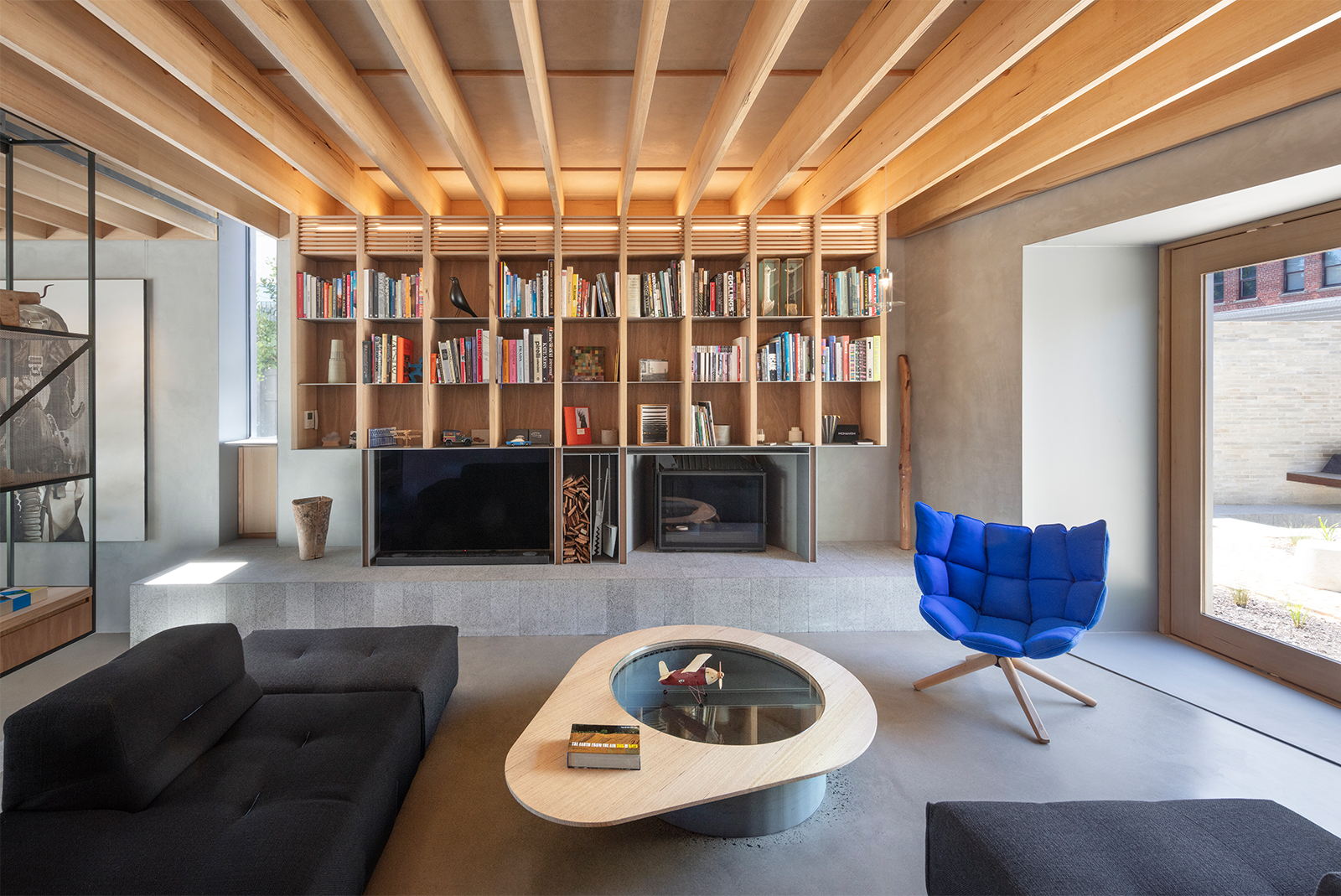 Clements and his wife Elisa had lived on the same Richmond street for eight years before building the home, which was completed in 2020.

The practice says it was this experience that influenced the initial design process for Divided House, which won The Marion Mahony Award for Interior Architecture at the AIA’s Victorian Chapter Awards over the weekend.

“This house endeavours to reconcile and enhance the values of the surrounding Heritage context through specific insight, personal interpretation, repair and renewal,” JCB says.

“Emerging from a slow and considered design journey, the house also looks forwards, acknowledging the nature of temporary occupation, future adaptation and the importance of neighbourly social interaction.”

With this temporary occupation in mind, JCB divided the home into two brick buildings placed at the front and rear of the site, allowing for potential future subdivision into two separate dwellings.

The two are linked by a single storey “lean-to”, which acts as the “gravitational centre of the home”.

Featuring a north-facing courtyard and garden, this space houses the kitchen and informal living space, both “dividing and connecting” the two buildings.

“The humble materiality of timber, perforated steel and concrete is detailed with a finesse that elevates and celebrates the palette.”

Architects showed a “strict commitment” to locally sourced and Australian made construction materials throughout the home, pairing the exposed timber beam and perforated steel ceilings with concrete flooring.

Timber and perforated steel also line the staircase and built-in elements like the desks, shelving units and joinery, many of which feature integrated lighting for a “unified aesthetic”.

Clements’s contemporary art collection was also integrated into every part of the home with “unexpected pieces” displayed in every room.

Brightly coloured “wet areas” break up the grey and timber material palette with one bathroom featuring a royal blue freestanding bathtub and shower curtain to match.

The AIA jury was also delighted by what it described as “hidden surprise elements” within the interior architecture.

“The hidden surprise elements, such as a cloak cupboard integrated into a pivoting art wall and a glazed skylight within a coffee table, bring delight and show the architect’s deft hand at combining the playful with the functional,” it wrote.

“The slow-burn process of crafting the interior architecture over many years, refining details and bespoke objects such as pulley mechanisms and moveable task lighting is also a homage to creative design.”

Outside, Indigenous and native plantings “acknowledge traditional ownership” and the historical landscape of the Birrarung, while Mediterranean and exotic plantings “reference post-war immigration” to Richmond and the previous owner’s 50-year occupation.

Founded in 1988 by Clements along with Tim Jackson and Graham Burrows, Jackson Clements Burrows is a Melbourne-based architecture, interior design and urban design studio.

Also in Melbourne this month, studiofour added a dramatic black zinc extension to this Federation-era home.