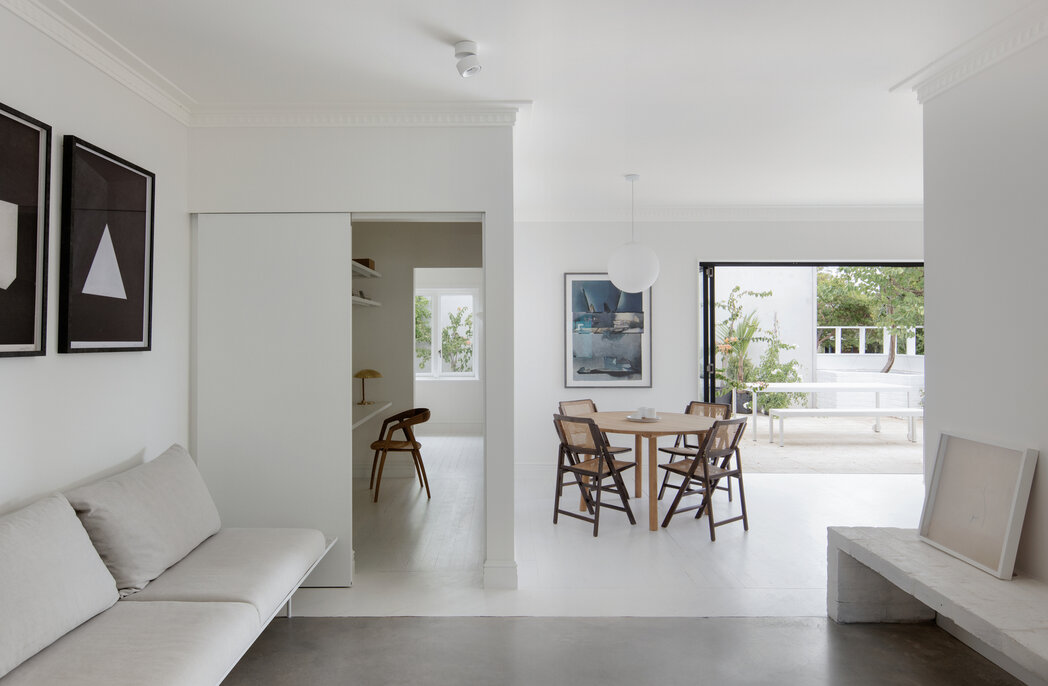 House B is the continuation of a model of good behaviour. The renovation and extension of a 1950s brick house in Perth’s coastal suburb of Scarborough solidifies the ethos that Whispering Smith established with House A.

Houses A and B sit adjacent on a triplex development plot, the likes of which can be seen littered across Perth.

“Western Australia is very fond of chopping up blocks into three equal parts and bulldozing everything to zero,” says Kate FitzGerald, founding director of Whispering Smith. “Our planning system encourages this pretence that blocks are terra nullius, that nothing is there.”

In the City of Stirling, where the triplex falls, it has been forecast that, by 2030 as a result of private developments, only five percent of residential land will be shaded by trees. Felled jacaranda trees and demolished redbrick character houses make way for ubiquitous ‘Mcmansions’, as FitzGerald describes them.

Whispering Smith conceptualised its three-home property development as an alternative to this urban density response.

Stage one, House A, was completed in 2017. An apartment-house hybrid, it used commercial materials to create a sustainable, carbon neutral home under Perth’s single bedroom dwelling code, proving that, “small could be big,” says FitzGerald.

The house’s diminutive footprint was set by Whispering Smith in order to retain the plot’s existing mature trees and the postwar house that now forms House B. Soon after completion, the project captured the attention of state and local governments as a case study to combat the region’s tree canopy loss and urban heat island effect.

While House A served as a paradigm of the architect’s capacity to work within significant size and environmental constraints, House B is a close study on the negotiation between Heritage retention and planning codes.

The existing house sat on a hill, angled to the north at the rear and with breezes passing through from the south-west aspect. Whispering Smith utilised this structure, leaving the original two-bedroom house intact, but nestling in an extension.

“It’s got the same corners and the same existing roof shape. We had to paint the bricks because there was a patchwork of different mortars,” explains FitzGerald. “It doesn’t look how it used to look, but it feels the same.”

A barrel-vaulted corridor runs the length of the project, forming the junction between the new and the old. The original home’s smaller bedrooms were divided to make way for a study. Sliding timber doors incubate the master bedroom and en suite with its own private garden.

The extension is made distinct from the old house with crafted features, including black-framed arched doorways and timber insertions that create moments of intervention from the outside.

The interior features the same approachable and muted minimalism that appeared in House A. The kitchen, with a curved steel island set in Italian triangular tiles by Mutina, leads to a travertine paved outdoor terrace where the complexity of the site is truly revealed.

A David and Goliath-style negotiation – between the preservation of an old empress tree and Cook pine tree and a planning mandate for two dedicated car parks – determined the entirety House B’s aforementioned structure.

“You’ve got built culture, you’re got landscape heritage from two beautiful old trees and you’ve got an existing house that has an enormous amount of embodied energy encompassed in it and you’re telling me I have to bulldoze all that for two parking spaces?” says Fitzgerald of the crossroads. “Everything was designated on getting two cars next to the limestone foundations.”

Whispering Smith decided to dig underneath House B to create the garage, forming the travertine floor of the outside space as the garage roof. Here, the two old trees create a private green space.

The two homes, with House C currently in development, are the prototypes of Whispering Smith’s New Resident building model: Perth’s answer to Breathe Architecture’s Nightingale Model in Melbourne. The framework is focused on identifying and saving unique character homes and existing tree coverage and in doing so build a micro-community of sustainable and affordable architectural meritorious residences.

This Whispering Smith approach, of taking development into the architect’s control and utilising their capacity to work within scale and context, has provided both an antidote and a blueprint for a new type of curated and considered suburban condition.

This year, the Western Australian State Government chose Whispering Smith as the architectural consultant to assist Design WA team in the writing of a new round of planning policies.

“I just wanted to do it the right way,” says FitzGerald, “that’s what architects can do.

“We are able to deal with the synthesis of different elements. The existing building, how it feels, where the sunlight comes from, where the trees are, how to fit the parking in, how to get the planning officer to think we’re not evil. That’s the mess we deal with on a day-to-day basis.

“We like the constraints of context and ethics and we’ll handle a multitude of these complexities to create a better outcome.

“And once you’re on the path of doing the right thing, it’s very difficult to get off,” says FitzGerald with a laugh. “It’s kind of a long-term play.”