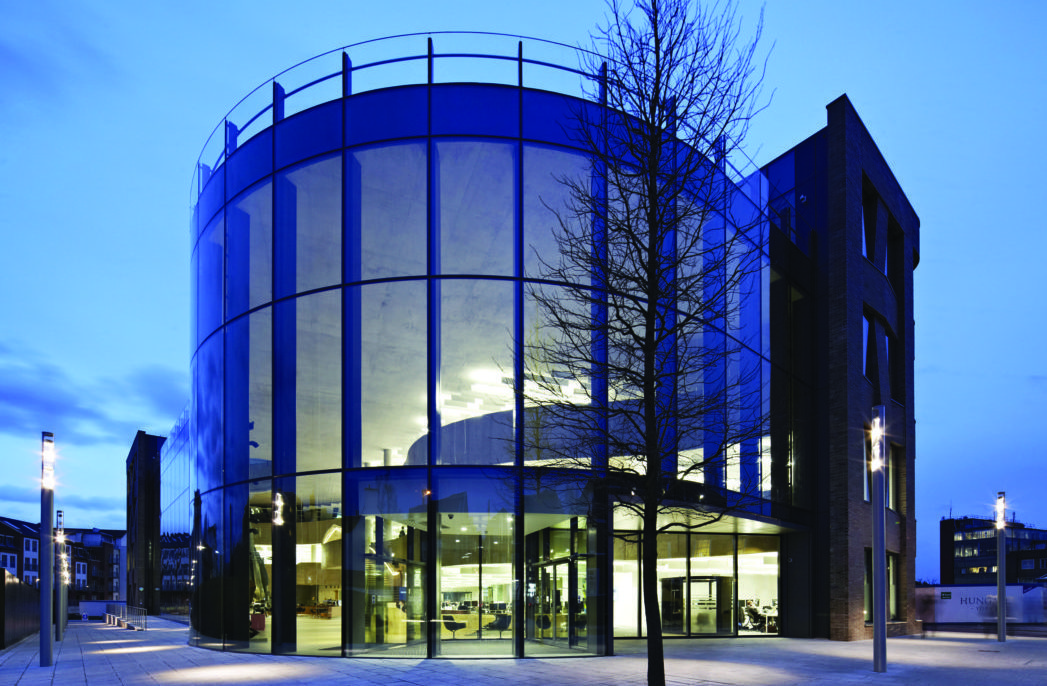 The Hiscox Building in York combines a Make Architects design with the workspace expertise of KKS to deliver a new underwriting and customer experience centre for global specialist insurer Hiscox. The landmark building, which opened in December 2015, is home to 500 Hiscox employees and is the insurer’s biggest UK office outside of London.

Our brief was to create a totally bespoke workplace, designed from the inside out, that brings together the very best thinking in architecture, workplace and brand experience – a ‘best-in-class’ building that reflects Hiscox’s ongoing commitment to leadership, innovation, creativity and growth. We were also set with the task of designing a contemporary building in the historic York context.

The 4432-square metre open-plan office comprises four floors connected by a spectacular central staircase. The stimulating work environment includes a ground floor café and ample internal breakout space, as well as a generous roof terrace with panoramic views of the city. A carefully curated display of unique sculptures and other artworks are integrated into the office, including a 12-metre long decommissioned rocket from the Soviet era – together these pieces seek to provoke and inspire, increase productivity and engender a sense of pride among employees.

The design of the Hiscox Building maximises natural light, vertical circulation and external terracing to create a bright, energised workspace. The building envelope presents two faces: a south-facing articulated brickwork weave that provides solar shading and a light bleed shield to the adjacent residential site, and a north-facing glazed elevation that addresses a new pedestrian route running through the development. We selected robust materials that would improve with age and use, and used in situ concrete throughout the interior interspersed with bespoke leather handrails and benches.

One of our main design influences was heritage-rich York itself. The interior centrepiece – the ribbon-like concrete staircase – is inspired by the undulating City Walls, as is the brick weave façade, which also draws on the former hay and wool market that existed on the Hiscox site until the 1920s. The roof terrace, meanwhile, offers fantastic views of the York Minster, while the new pedestrian route establishes a pathway linking the River Foss to York’s city centre. 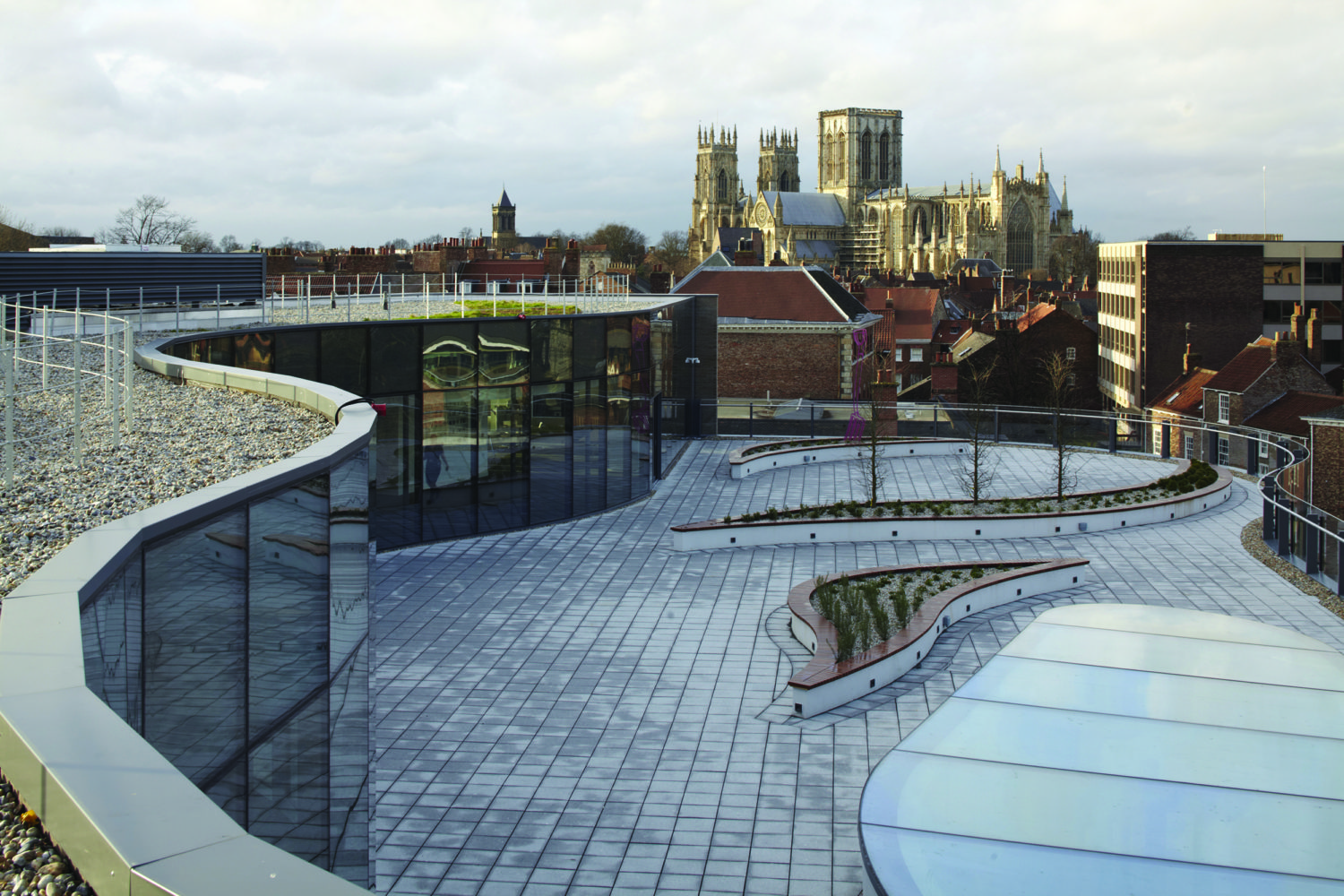 The building is fully sustainable, with an integrated engineering and structural solution that provides a naturally ventilated environment through operable windows and underfloor heating. The roof terrace has been designed to support biodiversity, and hosts a large PV installation that generates free and sustainable electricity from sunlight, thereby reducing the building’s overall carbon footprint.

The end result is a beautiful, functional office that significantly enhances the employee experience and sets a benchmark for all Hiscox workspaces, all the while engaging and revitalising the local community. The contemporary building also adds a further layer to the rich and varied site history.

What was your role on Hiscox?

Make were the architects, having won a competition with KKS to design the project. The competition proposal was unusual. Working alongside KKS as workspace interior designers, we were able to develop a design that worked from both the occupier and York perspective, ‘inside out’ and ‘outside in’. Reconciling the two became the driver for the scheme design.

When did you become involved in the project?

Our team won the design competition in December 2012.

How long did it take from commission to completion?

The process was three years from beginning to end, with construction taking around a year and a half. 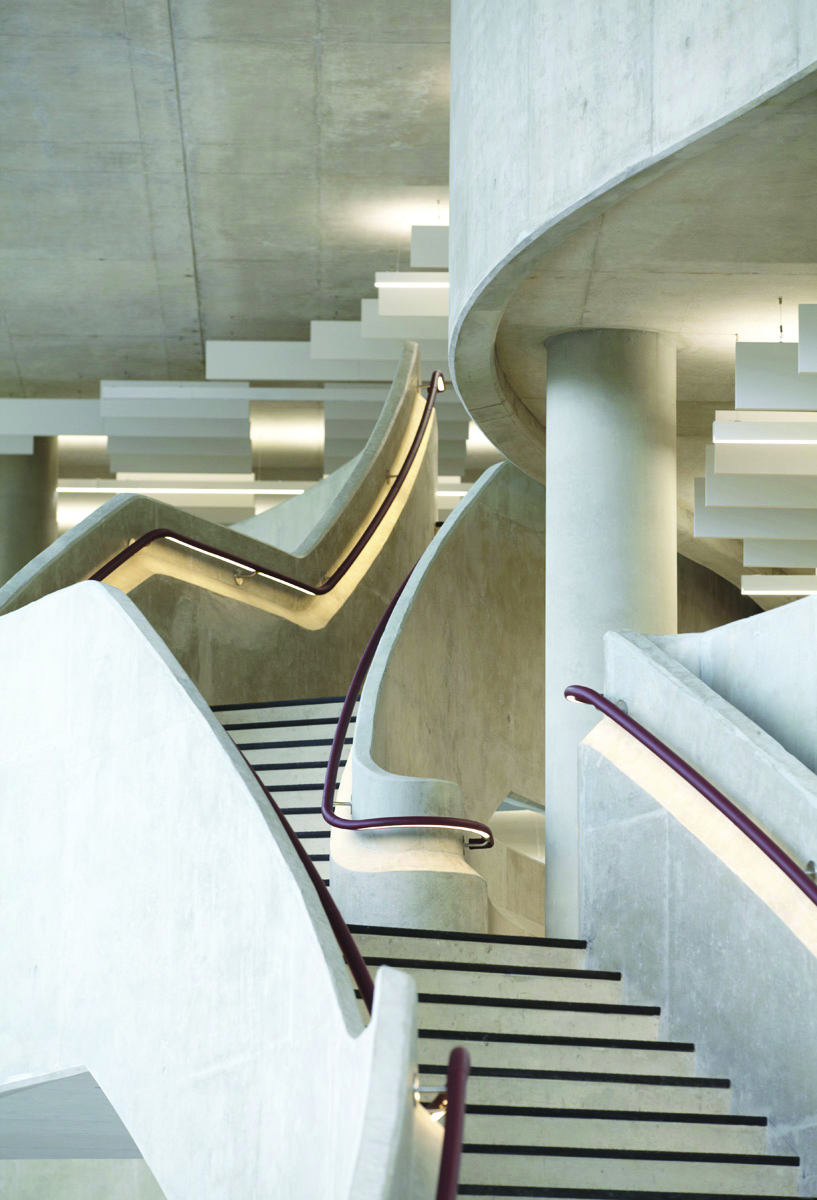 Were there any specific challenges at the outset?

York is a walled city in the north of England founded by the Romans. It is famous for the 13th century Gothic York Minster, which sits at the heart of the city, and the cobbled streets that lead up to it, known as The Shambles.

Much of the city is Heritage rich and our site is surrounded by Grade I and II listed buildings. As such, we consulted with a wide range of stakeholders from the earliest stages of the project to ensure our scheme was sensitive to its context. The discovery of historically significant remains just beneath the site’s surface also posed a challenge. A collaboration between the York Archaeologist Trust and Arup provided the scheme with a solution to preserve them. The building core location, reinforcement, piling and slab design combined to form a bridging structure within the ground floor slab leaving the remains undisturbed.

What were the practical considerations or difficulties along the way?

The cost parameters were challenging. The value engineering process was actually an aspect we are really proud of. It was undertaken in a truly collaborative environment with the designers, contractors and clients collectively taking responsibility for decisions. In this way, the vision of the scheme was maintained so that the design was distilled rather than diminished.

The seamless quality of the fluid, interconnecting stair could only be delivered by an in situ concrete solution. The three-dimensional nature of the stairs and slab edges demanded bespoke formwork, which was set out and constructed on-site. The complex geometry of the formwork and temporary works presented some of the most challenging build sequences on the project. An extremely skilled set of surveyors and joiners worked closely to deliver joint free sculptural concrete requiring no decoration or embellishment. 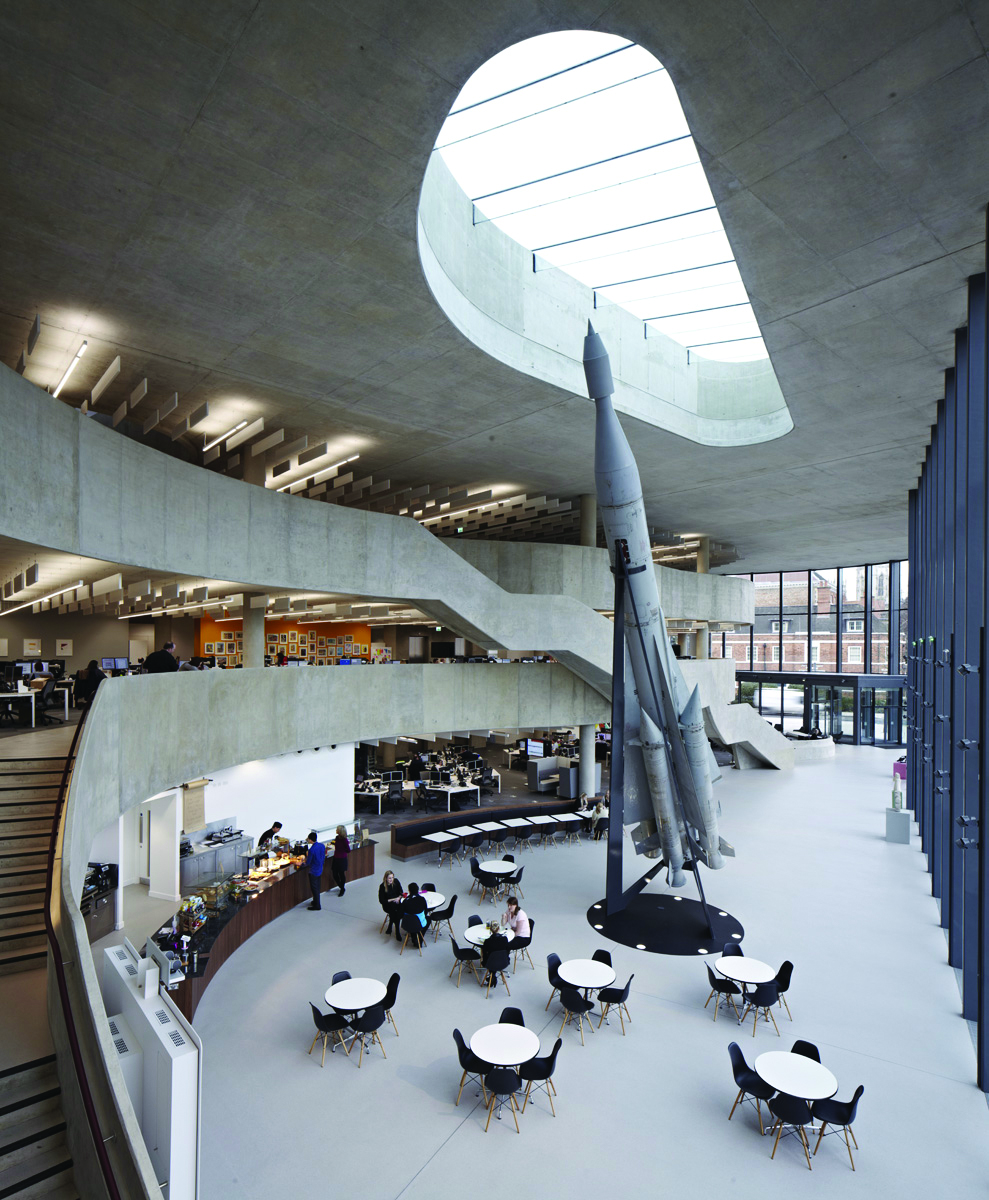 What is your takeout from the project?

It really was a fantastic collaboration, at every stage, between the City of York, the client (Hiscox), the designers and contractors – everyone understood what we were trying to achieve and shared the vision. As such, each party was able to contribute to a building that conveys a sense of joy from both inside and out.

How well do you think the finished building has addressed its brief?

Our brief was to create a totally bespoke workplace, designed from the inside out, that brings together the very best thinking in architecture, workplace and brand experience.

The end result achieves that – and more. It is a beautiful, functional office that significantly enhances the employee experience and sets a benchmark for all Hiscox workspaces. It engages and revitalises the local community and, as a contemporary building, it adds a further layer to the rich and varied site history.

The building’s location and arrangement has been designed in response to the dominant city features – the York wall and the Minster – and the spaces and routes created by the building siting enhance the cityscape and provide an appropriate setting for the neighbouring listed buildings.

The design utilises natural light, spatial variation, vertical circulation and external terracing to provide an exhilarating working environment, and embraces a materiality that has an integrity without decoration or adornment. The building envelope presents two faces, a south- facing articulated brickwork weave and a north-facing glazed elevation addressing the city centre and the newly provided public space.

The Hiscox building embodies a sense of joy exemplified by the integration of art both in the workplace and amenity spaces. The feature staircase provides the thread connecting each employee and the connection back to York, via the third floor terrace with its views of the ever-present Minster.

On completion we have had a great response from both Hiscox and the wider city. The results of the post occupancy survey by KKS were brilliant and staff satisfaction and their enjoyment was evident from day one.

Alan Millard, chief operating officer, Hiscox UK, said: “Our York office has been a long time in the making and the finished product has exceeded all our expectations. It is an architecturally beautiful yet practical building and, we hope, a fantastic addition to the city.” 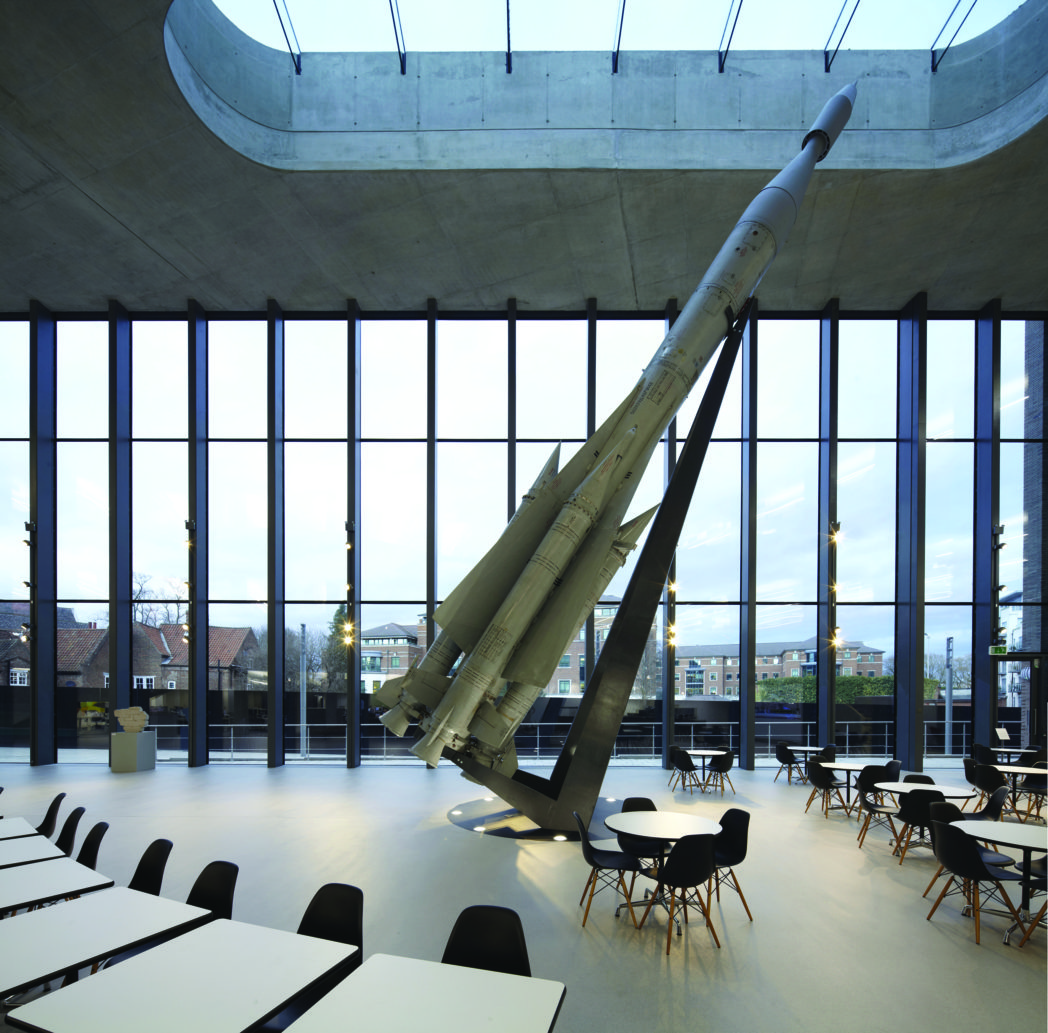 Are there any particular touches or elements that stand out for you or that you love?
I have a few favourites:

One aim was to use the office as a place to provoke and inspire. As such, a carefully curated display of unique sculptures and other artworks are integrated into the office, including a 12-metre long decommissioned rocket from the Soviet era.

The sculptural impact of the concrete is very special. The curving concrete floors wrap around the atrium, while the centrepiece, the ribbon-like concrete staircase, snakes around the southern side of the atrium, linking all the floors in a complex geometry and incorporating balconies with bespoke leather handrails. It was conceived as an extension of the city walls and can be seen through the glazed façade.