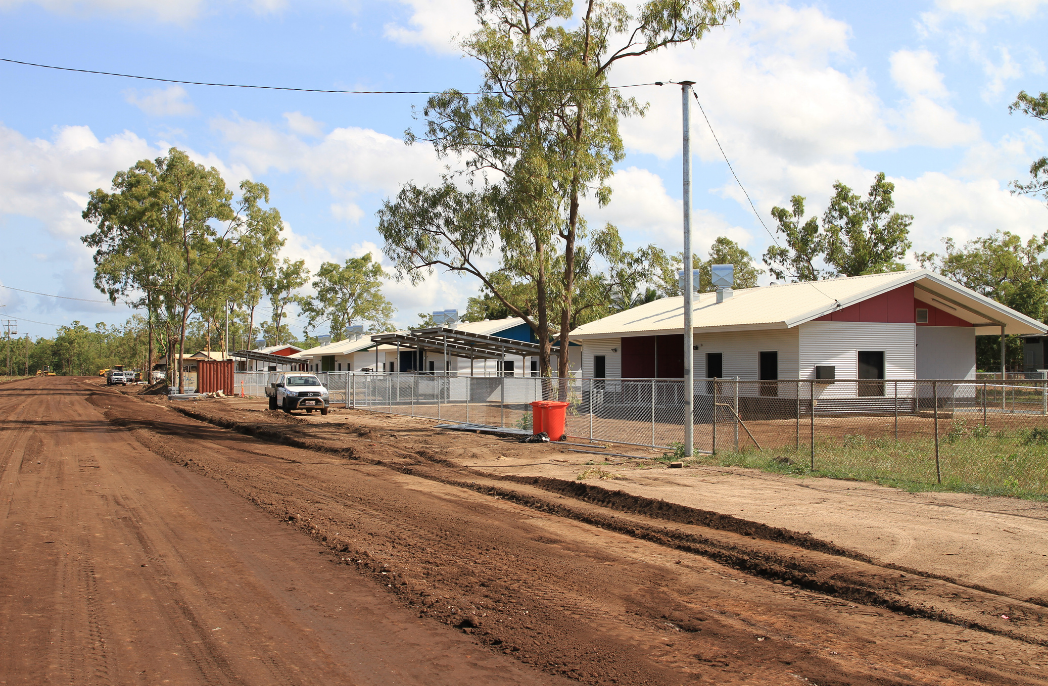 TheFulcrum.Agency calls for a radical incrementalist approach to Indigenous housing with its intimate project on Groote Eylandt, on the Groote Archipelago.

Architecture is thought of as the slowest of creative pursuits. But TheFulcrum.Agency is advocating for it to become even slower when working for Indigenous communities.

It’s a pace that the Fremantle-based practice set six years ago when first commissioned by the Anindilyakwa Housing Aboriginal Land Council (AHAC) to address the housing crisis in Groote Eylandt, part of East Arnhem Land.

The initial brief from AHAC was to build 100 houses as quickly as possible. After intense community consultation,TheFulcrum.Agency advised no more than six to 10 houses per year and designed in such a way that local contractors could do the work.

It’s been this slowing down and the building of meaningful connections within the community that principals Kieran Wong and Emma Williamson cite as the project’s greatest achievements.

“The lessons that have been learned over the many decades building remote community housing became more relevant because we didn’t build quickly,” explains Wong. “What we focused on was effective engagement with the local people to understand the needs of housing and where it should go.”

TheFulcrum.Agency undertook years of meetings with members of 14 local clan groups to understand why past housing solutions had failed and what specificities and traditions had been overlooked. It was an upending of the standard community consultative process in which questions are asked despite decisions often being predetermined.

The procurement model for Indigenous housing has historically been governmental and, as a result, architects have tended to deliver housing that is cyclical, tending to favour novelty over practicality or a nuanced reflection of needs.

“Housing is a sector in which the model of transferring agency to the community has been resisted by governments for decades,” says Wong.

“What we’ve been working towards is community decision-making and community empowerment. It’s the ability for reference groups to fade back so that we can learn about both cultural practice and design implications.”

TheFulcrum.Agency looked to the health sector for this paradigm, wherein the people who are trained as nurses, doctors or technicians are local community members or Indigenous community members.

“You could see the effectiveness of that model when COVID-19 hit. The Indigenous community-controlled health sector mobilised swiftly and the community trusted that sector,” says Wong. “That process is what needs to happen with housing as well.”

“Clearly the standard model for Indigenous housing hasn’t worked. And rather than just constantly trying to tweak the edges of that system it was about seeing what new model needs to exist,” says Wong.

TheFulcrum.Agency’s Groote Housing Master Plan and the Groote Housing Guide are the documents of this ‘new model’. Both are recipes for a co-production process that effectively transfers control of housing – the allocation process, design, construction and maintenance – back into the community.

This ‘new model’ has resulted in housing plans that are flexible and modular in the way they respond to living arrangements and lot orientations. Each plan addresses the cultural factors that often lead to crowding stress, with bedrooms located in clusters on opposite sides of the house and each cluster has its own bathroom.

Protected verandahs act as extra sleeping areas for visitors and non-structural columns and beams have been added to each verandah to allow the creation of temporary walls. Carports include tie-off points and power, enabling them to be used as additional outdoor living spaces.

The Groote Archipelago project is indicative of why Wong and Williamson pivoted to an ‘agency’ rather than a studio business model for their built environment work in 2018. It’s a model that allows the architect to act as a client’s ally rather than imposing their own ego. It requires a humility with which the studio system struggles.

“I think one of the reasons our practice exists in the form that it does now, as an agency, is because it allows for this notion of empowerment of local communities and the trust and transference of power in both directions,” says Williamson.

“In many respects, that’s why governments have been resistant to handing control of housing control over to communities, because they’re not very good at losing power.”

The Groote Archipelago Housing project set a precedent for the ‘unlearning and relearning’ in which TheFulcrum.Agency engages with each new project, as well as its generous allocation of time to form these bilateral relationships with each client and community.

“This new model is incremental; it’s not a radical transformation,” explains Williamson. “But it is radical to unlearn the professional skills that you’ve learned. In that way, incrementalism is the most radical position that one can take.”

This article first appeared in AR167