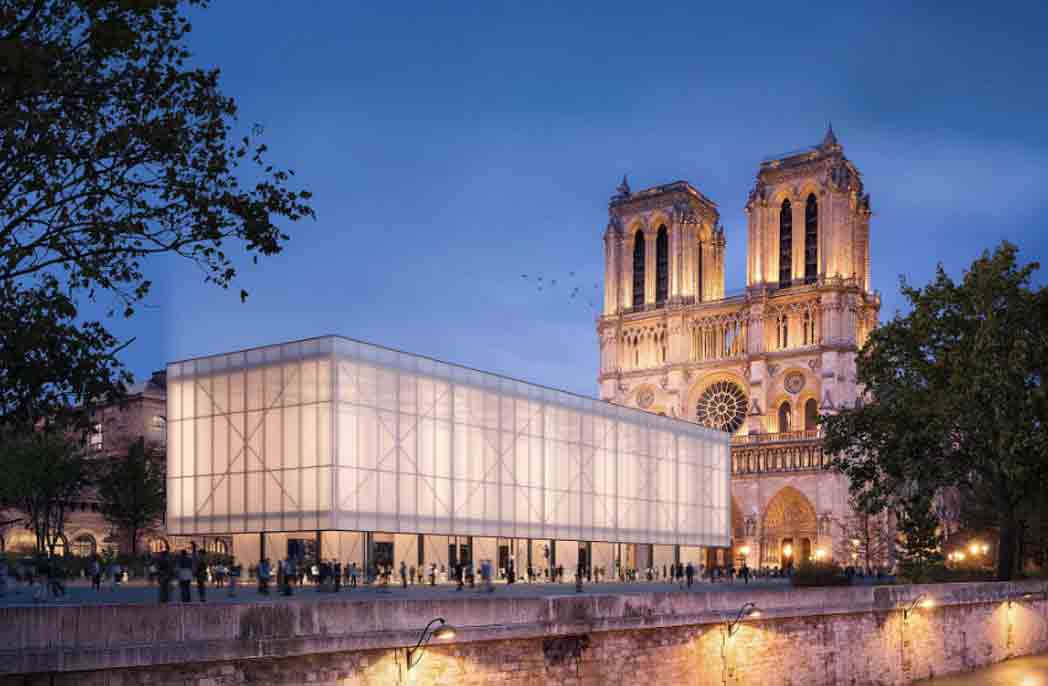 Gensler has unveiled conceptual plans for a temporary pavilion at Notre-Dame following the fire that destroyed the 850-year old cathedral’s roof.

In an event that drew world-wide attention, the fire, thought to have been started by a short circuit, tore through the timber framework in the church’s attic, burning for eight hours and causing the spire to collapse.

In the days afterwards, the rector of the Paris landmark, Monsignor Patrick Chauvet, asked for a temporary structure in which to worship while the reconstruction is being completed.

Gensler was chosen to design that structure, which will go up on the paved square in front of the cathedral and will be made primarily of charred timber supported by an Ethylene Tetra Fluoro Ethylene (EFTEC) cushion roof and translucent polycarbonate walls.

“Charred timber, which is one of the oldest and most effective methods of protecting wood from fire, also symbolises that what once destroyed Notre-Dame will only serve to make it stronger, thus expressing a language of rebirth and transformation,” he says.

The pavillion won’t only serve a religious purpose, but will also be used for exhibitions, markets and performances. 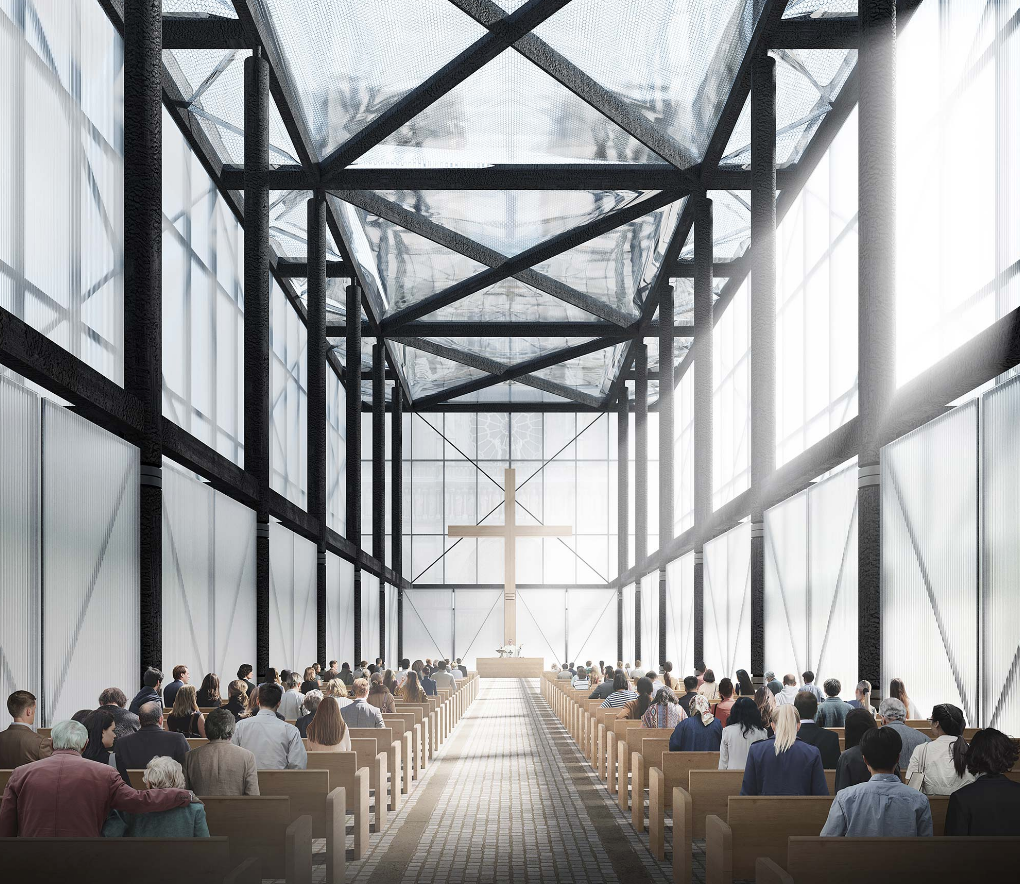 Behind the altar, movable panels would allow a full view of Notre-Dame.

Gensler’s design also includes rotating panels at ground level that can be used to close off the cathedral during mass or open it up to create a space for events.

“It is important that the design is true to, but doesn’t upstage, the cathedral.” says Swinhoe.

“We wanted to strike a balance between a structure that invites the community yet can be transformed to become a reflective and spiritual haven when mass is celebrated. We hope this offers the people of Paris, and the world, a statement of hope and rebirth.”

Following the fire, French President Emmanuel Macron declared Notre-Dame’s roof would be rebuilt in five years, boosted by a billion dollars in donations from across the globe.

Some of the world’s top architects unveiled designs to replace the roof and 90-metre wooden spire, which was added to the church about 150 years ago by the 19th century French architect Eugène Viollet-le-Duc.

Paris-based firm Vincent Callebaut Architectures is one of firms that participated in the competition, submitting an eco-friendly design.

A post shared by Vincent Callebaut Architect (@vincentcallebautarchitectures) on May 5, 2019 at 8:07am PDT

The project, called “Palingenesis,” (Greek for rebirth or regeneration), features a glass, oak and carbon fibre roof that converts solar energy into electricity for the cathedral. The roof also has an urban farm to grow fruits and vegetables that will then be donated to locals at weekly farmers’ markets.

Another concept from Callebaut would see the cathedral crowned with a roof that generates energy and contains an aquaponic farm.

While Dutch firm Studio Drift proposed a blue tiled roof made from recycled ocean plastic. The project would save thousands of trees, while also making the roof resistant to future fires.

The firm calls the design “a meditative public space with unmatched views over Paris”, and would eliminate the spire entirely, focusing instead on the 12 statues of the apostles that survived the fire, which would act as “guardians” of the public space.

But these kinds of proposals alarmed conservatives and traditionalists, and in May, France’s Senate voted to restore the Parisian cathedral to its last known visual state prior to the fire, directly contradicting any hopes for a more contemporary design.