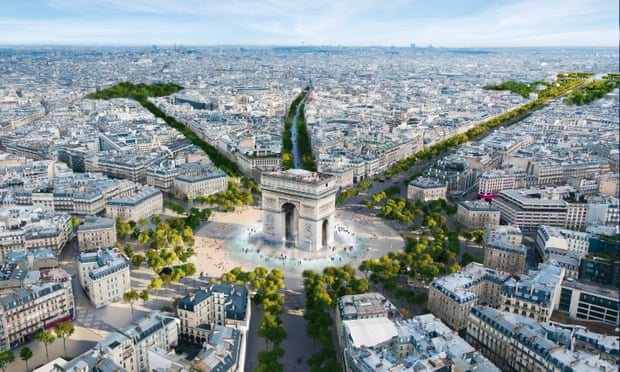 The Mayor of Paris, Anne Hidalgo, has confirmed the French capital’s plan to convert the city’s main Champs-Élysées boulevard into an “extraordinary garden”.

In the announcement yesterday the mayor said that the city would spend £225m converting the traffic-clogged 1.9 km avenue into a green public space reminiscent of its promenade history.

The project will be designed by Paris-based PCA-Stream architects, with early details of the firm’s plan revealing an ambition to cut down the cars on the street by half and create a tunnel of trees to improve air quality.

In 2018, the Comité Champs-Élysées, an organization that brings together the boulevard’s main public and private stakeholders, invited PCA-Stream to engage in an initial study of the avenue’s potential. Their practice’s report ‘Re-enchanting the Champs-Élysées’, was presented at a conference in April 2019.

PCA-Stream’s research found that Parisians largely avoid the avenue today. Two-thirds of the 100,000 pedestrians who walk along the Champs-Élysées everyday are tourists (68%), the overwhelming majority of which come from abroad (more than 85%). Parisians now only amount to 5% of these visitors.

“The legendary avenue has lost its splendour during the last 30 years. It has been progressively abandoned by Parisians and has been hit by several successive crises: the gilets jaunes, strikes, health and economic,” the Comité Champs-Élysées said in a statement welcoming the mayor’s announcement.

PCA-Stream’s vision is to reinvigorate the symbolic power of the Champs-Élysées by transforming the avenue into an exemplar of sustainable and inclusive city design.

The overall vision for the district, located between the Champs-Élysées roundabout and the Arc de Triomphe, builds up the quality of use over a period of ten years through the reduction of traffic, improvement of air quality and introduction of green spaces for pedestrians.

Reducing the 8-lane highway will be carried out incrementally, improving the air quality that’s been impacted by the 3,000 cars that pass through the avenue every hour.

Planted “living rooms” will offer spaces to take breaks and a unified, ground level will make it easier for pedestrians to cross over to the other side of the avenue.

The development plans also include a redesign of Place de la Concorde – one of Paris’s most important public squares – located at the south-east end of the avenue.

ADR recently spoke to Architectus and Make Architects about the politics of restoration in light of their work re-invigorating Sydney’s iconic Shell House clock tower.

How can you power project success with Deltek Vantagepoint?